Duke students are aware of all of the changes taking place on Duke’s campus, but they may be less informed about those happening in Durham. Moriah Lefebvre’s exhibit, “Hometown (Inherited),” showcases the physical changes taking place at incredible speeds around the city.

“Hometown (Inherited)” is being shown at Through This Lens gallery until March 15. In May, it will be featured at Urban Durham Realty. The gallery will host a closing reception this Sunday from 2 p.m.-4 p.m., and Lefebvre will give an artist’s talk at 3 p.m.

Lefebvre was born and raised in Durham. After briefly leaving the city to attend the University of North Carolina School of the Arts in Winston-Salem, Lefebvre decided to stay and raise her own family in Durham. Having her own children led Lefebvre to realize the changes taking place around her in her hometown.

“Something happened when I had my boys where I start realizing these moments in the landscape that had looked one way when I was growing up, and now that they’re growing up they look another way,” Lefebvre said.

Lefebvre started the project by taking a photo of herself and her twin boys in a clear cut forest in North Durham without realizing that the photo was going to turn into a series. Lefebvre then began to take photos with other local families in locations that showed physical changes taking place in Durham.

The theme of families is seen throughout all of Lefebvre’s pieces, as each of them contain a parent with one or more children, with the exception of one photo that shows a pregnant woman.

The title of the exhibit, “Hometown (Inherited)” relates back to the intergenerational aspect that Lefebvre has found in her work: Durham is her personal hometown that has been inherited by her children.

“It’s about parents and their children and what it’s like to be raising your kids in this location that’s in the process of changing so dramatically.”

As a Durham native, Lefebvre has seen many of the changes that have taken place in Durham. She personally has seen the most change in the downtown Durham area, which has become a cultural hub for the city. The rise of huge luxury apartment complexes also stands out as a major change in the landscape of the city. While Lefebvre is excited by the new people that these changes bring to the area, she also realizes that these changes could come at the cost of displacing lower-income families, many of whom have lived in Durham for generations. 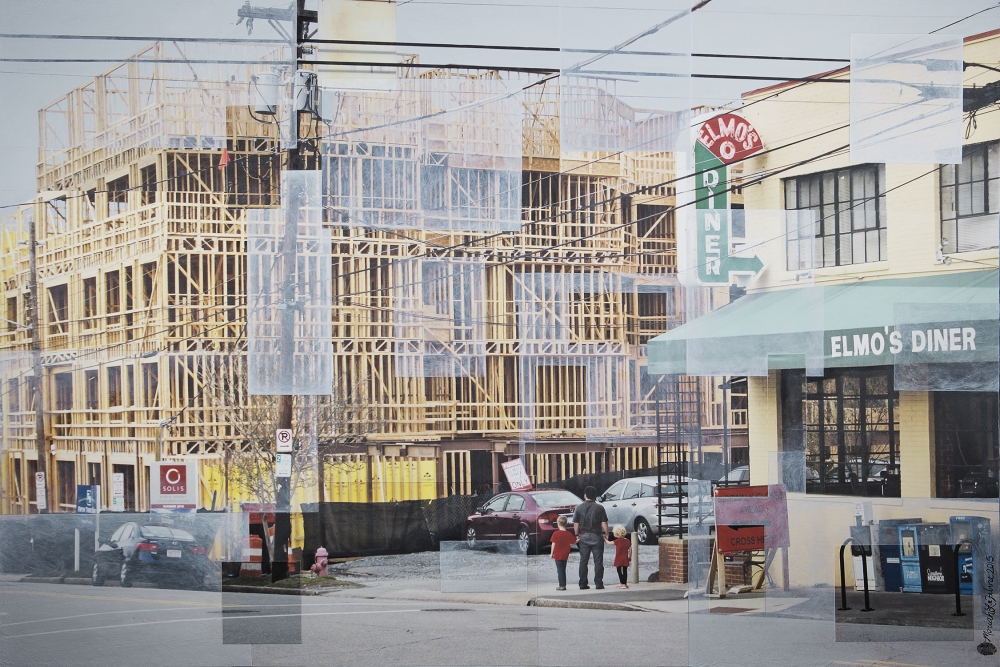 “I definitely am not one to think that these changes are either good or bad. I think it’s a mix of both of those things at the same time,” Lefebvre said. “It’s both exciting and concerning.”

“It gets at this idea of these shifting pieces that are moving and constantly changing and evolving, and that’s what’s happening to the landscape I’m looking at,” she said.

Through This Lens is a gallery in downtown Durham that specializes in showing photographic work. The gallery, which opened 11 years ago, shows exhibitions by artists from all over the world, but it mostly focuses on local artists like Lefebvre. Gallery director Roylee Duvall found Lefebvre’s exhibit to be different from the gallery’s typical shows, which tend to be more journalistic.

“Even though there is an element that you might think of as being journalistic, it’s also very imaginative and I think in part it explores the idea of the effect of change on families,” Duvall said.

Lefebvre was able to complete her project in large part due to the Ella Fountain Pratt Emerging Artists grant, which was awarded to her from the Durham Arts Council. The grant is awarded every year to emerging artists. This category includes artists who are just starting out in their careers and artists who have reached a pivotal moment in their careers.

Although Lefebvre was planning on ending the project when she put it on exhibition, the incredible support that she has received has inspired her to continue taking photographs of the changing Durham landscapes.

“There is still so much going on in Durham and I feel I want to continue capturing it,” Lefebvre said.