No shortcuts on Hillsborough Road

Durham’s Hillsborough Road is not much to look at—its catalogue of gas stations, chain restaurants and banks is familiar to anyone who grew up in suburbia. A version of this street exists in every decently-sized town in the country. It is so generic that it might represent any street anywhere, and it is so wholly unremarkable that it might represent nothing at all.

You could be forgiven, then, for thinking Hillsborough Road an unlikely setting for an epic journey. But you would be wrong—for there’s something about the street that is actually quite exceptional. Subtly so, easy to overlook, but exceptional nonetheless.

In a stretch of scarcely half a mile, Hillsborough Road has 10 fast-food restaurants.

To eat at all 10 restaurants in one day might seem impossible. If not impossible, it is definitely unhealthy and absolutely stupid.

Like most Duke students, my introduction to Hillsborough Road came with a trip to Cook-Out early in my freshman year. It happens in every East Campus residence hall—it is a little too late at night and no one knows each other quite well enough, but someone has a car and someone else knows their North Carolina restaurants and soon enough you are all laughing, music loud, as you speed along to your promised milkshakes.

But apart from Cook-Out, I haven’t spent much time on Hillsborough Road. There have been a few hungover morning treks for Bojangles’ biscuits, a trip or two for Chick-Fil-A’s waffle fries—but not much past that. Eating at every restaurant on the street is something I wondered about in the same vague way that I sometimes wonder how I would fare falling down a flight of stairs.

To me, fast food is desirable almost exclusively at emotional extremes. That is to say: it is what you get with a car full of friends, when the sun has gone down and you feel so complete and so content that you can be a little reckless, go wherever, do whatever, eat whatever. And it is what you get when you are absolutely alone, when everything seems vaguely meaningless and nothing can stop you from feeling quite so hollow. This is when you get fast food.

From the outset, my friends knew they would not attempt all 10 restaurants. They, unlike me, are not that dumb and idealistic. We would make the complete journey as a group, of course, and they would each eat in at least half the restaurants—but the stupid glory of actually eating that perfect 10 would be mine and mine alone.

It started off easy enough. A bacon-egg-and-cheese from Biscuitville, a mediocre warm-up of sorts from a restaurant I would never otherwise visit (a restaurant no one should visit, considering that their biscuits pale in comparison to those of Bojangles a block away). Next was a medium order of curly fries at Arby’s, which earned points for its relatively wide variety of condiments. Everything was fine! It was great! My fears of immediate failure had been for naught! I erased the disappointing memory of Biscuitville by going to Bojangles next, basking in the culinary glory of a cajun chicken biscuit paired with sweet tea.

But a funny thing happened on the way to finishing that beautiful biscuit—I started to struggle. The last few bites were a chore rather than a joy. The honeymoon period was officially over, I realized. This was when it would really begin.

The next stop provided a philosophical debate to distract me from my discomfort, even if only momentarily: what were we to make of the building that housed the combination KFC-Taco Bell? We had already determined that I needed to order from both menus, of course. But did I need to order the items separately? Eat them at different tables? Physically exit and enter the building multiple times to create the greatest illusion of separate restaurants? All of the above, we decided. For there are no shortcuts on Hillsborough Road.

And then—oh! then—I entered into the lowest period of the day. The next 20 minutes were spent in abject misery at McDonald’s, full far beyond the point of comfort, repulsed by the hash browns in front of me (making use of the 24-hour breakfast menu was, in retrospect, a mistake). C-SPAN 2 inexplicably blared on above, and slowly, the four of us began to realize the gravity of our situation. It had been nearly three hours since we left campus. We still had four stops to go. The sun was beginning to go down, and we were beginning to grow tired of each other. What had been gentle words of encouragement became “come on, just eat your food.” I picked at the hash browns, numb.

But we had come in together, and we would go out together—and the only way out was through, and through brought us to Wendy’s. Here, we were unified in our order for the first time since early in the day, each choosing a small chocolate frosty with a side of fries to share. To say it was easy would be misleading, but it no longer seemed impossible. I was not alone, and I could overcome my weaknesses. We persevered—mock-studiously inspecting the decor at Zaxby’s while I made it through an order of boneless wings, re-enacting scenes from “The Bachelor” with the cheap floral centerpieces at Chick-Fil-A as I conquered half of a spicy chicken sandwich.

And finally—gloriously, astonishingly—we were at the promised land of Cook-Out, blasting “The Final Countdown” as I prepared to order my regular milkshake, the tried-and-true favorite of peanut butter fudge. I knew I would only be able to handle a few sips, and I didn’t care. It was the principle of the thing. It was over, and we had won. We tried to explain the situation to the cashier, to no avail—but it didn’t matter. No one else had to understand the unique flavor of our hard-fought success, so long as we knew it ourselves.

To be clear: I do not support eating at 10 fast-food restaurants in one day, because it’s a stupid idea that has absolutely zero purpose or value, and I can now say with great certainty that you would have to be ridiculous to think otherwise. But I do—I think—support laughing as you drive a familiar road with familiar people into the night, realizing with a weird clarity that you are so much younger and luckier than you sometimes think, “One Shining Moment” playing in the background as you reach for a milkshake. 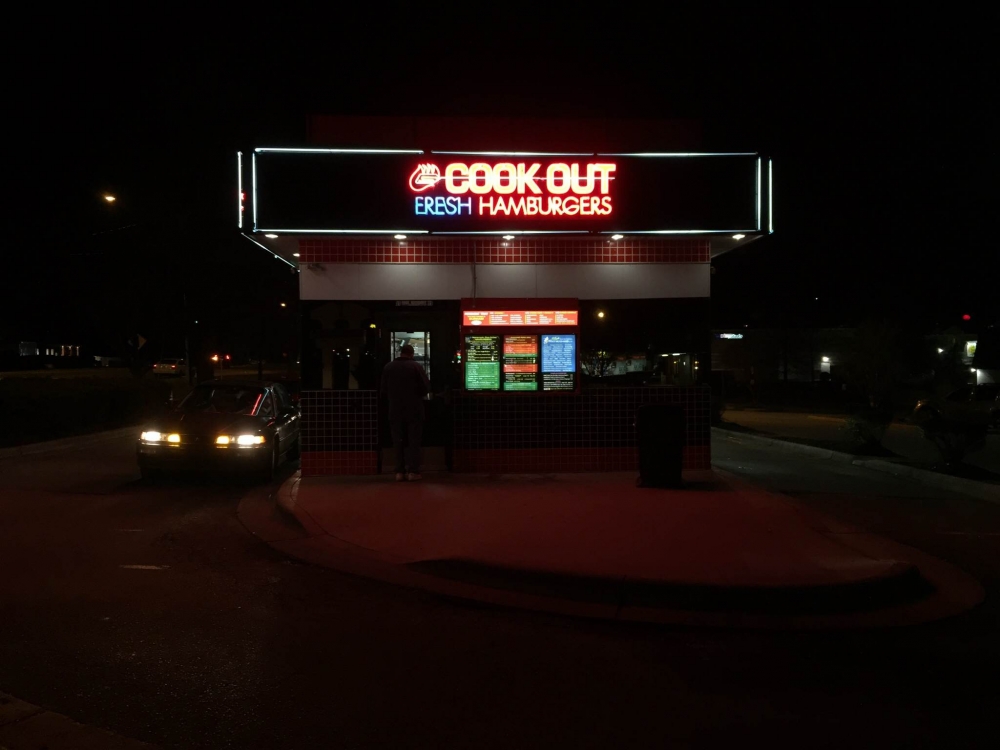 Share and discuss “No shortcuts on Hillsborough Road” on social media.