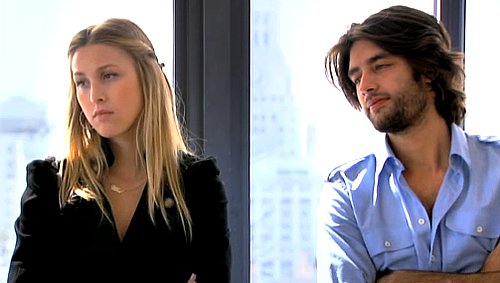 For some reason, there isn't a single person on this show who can say no: Olivia can't say "No, get the f--- out" to Nevan, Adam can't say "No, find your own apartment to Allie," Erin can't say "No, I don't still love my ex-boyfriend you can trust me" to Duncan, and Whitney can't say "No, you're such a scrub I don't want you to live with me" to Jay.

Let's begin with Olivia. Her scrub of a cousin, Nevan, is still living with her. He tells her he doesn't want to move anywhere else because it would be such a downgrade from her awesome apartment. His life shouldn't be worse than hers. Of course, he says this while he's still hung over, presumably from drinking cans of Bud Light in her apartment (there's one still on the counter). Please, please let Nevan continue living his fabulous lifestyle.

Next we shift to Adam and Allie, fighting over a game of Scrabble. Allie seems like the passive aggressive type who spells words to indicate how she's feeling, except she isn't clever enough to spell many words, so she probably spelled something like "MEANIE" against Adam. Unfortunately, "MEANIE" doesn't net you many points in Scrabble and Adam won. Allie is incredibly good at manipulating Adam though, and manages to get him to kick Jay out just to avoid another fight. That's what happens when you cheat on your girlfriend and still stay together, Adam. Allie is just so sad. Earlier in the episode, Whitney and Erin were talking about how she is "stranded" and has "nowhere else to be." Seriously? She has no friends? Family? Is it because she manipulates everybody? Luckily Adam is easily manipulated and tells her, "I love waking up next to you everyday. There's nothing more I could ask for. I couldn't imagine living without you. I love you." Cue Womanizer. Thanks MTV. We get it.

Erin is just ridiculous this episode. She apparently lives by the philosophy of "hav[ing] your cake and eat[ing] it too." After JR awkwardly breaks up a face sucking contest between Duncan and Erin at a party, Duncan gets pissed and takes her off to the side. She thinks it's a good idea to tell Duncan that "part of [her] heart will always love JR." Duncan is tough though. It must be the beard. He tells Erin later that he wanted to punch JR and that he needs to know if he can trust her. No response. He then walks off by himself in the snow. Erin sheds one tear. Touching. Of course, Erin later gets drunk and cries at a New Year's party when he doesn't call her. Not nearly as touching. Throughout all of this, Erin manages to wear a wreath on her head in one scene and a few feathers sticking out in the next. Did she get jealous of Whitney in her Little Bo Peep headbands that she wanted to join in on the fun?

Finally, we have Whitney. We first find Whitney and Olivia trading insults at the DVF holiday party as Whitney gladly tells all her friends just how bad she is at her job. How are you supposed to know the names of all these fashion designers? Oh, wait, it's your job. So maybe it shouldn't surprise us when she can't say no to Jay's request to move in with her after he gets evicted. After all, who could say no to a guy in a top hat and a glimmery, fish scale vest. Guess she got a little too drunk a little too early on New Year's Eve. She realizes his mistake immediately after a scrubby Jay wakes up and puts on a purple flannel shirt (okay, I kind of like the shirt). Jay then asks her if she will start cooking for him. Whitney looks really pissed after realizing what she's done. Oh well.

Ridiculous episode all around. How are Nevan and Allie still around? How does Whitney have a job? Why do Jay and Adam have a friend called Smooth with a stripper pole in his apartment? In all honesty, I'm already over The City. Can we get the reality TV version of Chuck now?

Share and discuss “The City - "Unexpected Roommates"” on social media.