The Trinity College Industrial Indian Boarding School was one of over 400 schools identified in a federal investigative report in May. For Duke’s Indigenous students, the naming raises the opportunity for the University to reckon with its past by supporting its current students.

The Department of the Interior launched the report in June 2021 as part of its Federal Indian Boarding School Initiative in an attempt to identify boarding school facilities, nearby burial sites , and identities of children and tribes at the location. The announcement came soon after the discovery of 215 unmarked graves of children from Canada’s Tk’emlúps te Secwepemc First Nation at the Kamloops Indian Residential School.

“This report confirms that the United States directly targeted American Indian, Alaska Native, and Native Hawaiian children in the pursuit of a policy of cultural assimilation that coincided with Indian territorial dispossession,” wrote Bryan Newland, assistant secretary of Indian Affairs, in a letter to Secretary of the Interior Deb Haaland.

Twenty students of the Eastern Band of Cherokees attended Trinity College from 1882 to 1887, according to Nora Campbell Chaffin, former Duke history professor, in her book “Trinity College, 1839-1892."

Scarlett Guy, Trinity ‘22, is the former president of Duke’s Native American and Indigenous Students Alliance and a citizen of the Eastern Band of Cherokee. She recalls the first time she learned about the Trinity College Industrial School in her freshman year.

“[My classmates] were passing around a roster that had been named of about 20 boys who were attending the school from my tribe, and I remember just staring down at it, just in complete shock and in disbelief, because I recognized [almost] every single last name on that list,” she said. “It was just eerie and disappointing to see that Duke had a school that directly affected my people, because I just kept thinking, ‘What if my classmates back at home were the direct descendants of these boys?’”

During her time at Duke, Guy undertook an archival project to unearth Duke’s history with Native people, with a focus on the Trinity College Industrial School. She noted that documentation of the day-to-day of the school was limited, and that even finding photos was difficult.

“I was kind of surprised I didn't know about [the school] beforehand, because I live in Cherokee, North Carolina, and I've never heard anybody talk about it,” she said.

“The Government paid $167 annually ‘for housing, boarding, clothing, and teaching’ each of the Cherokees,” Campbell Chaffin wrote. President Wood remarked in a June 1884 report to trustees that the College earned $212.75 from the school, or $6,345.51 adjusted for 2022 inflation.

“Would Duke even exist as an institution today if it weren't for this at this time?” Guy said. “Maybe they would be, but during that time [when] they were struggling, and they hadn't had the Duke [family’s] money yet, they were surviving off of the federal boarding school that they were running.”

Now, students are advocating for Duke to reckon with its past. In August 2021, the then-named Native American Student Alliance wrote an open letter to the University with a list of “asks.” Among these was a request for a meeting with the Vice Provost for Undergraduate Education to “discuss academic scholarships for Indigenous students as reparations for the Trinity College Cherokee Industrial School.”

“It’s still in the very, very early stages of seeing something like that happen," Guy said.

NAISA is also advocating for Duke to hire at least two more Indigenous faculty members after the cluster hire in Native American and Indigenous Studies, with the longer-term goal of establishing a Native American studies program and Native American Center at Duke. The organization is also communicating with administration about the hire of a full-time advisor to provide support at the staff level and assist with programming such as NASA’s annual powwow.

Student Affairs is hiring an assistant director in the Center for Multicultural Affairs that will support both undocumented/DACA students and Native and Indigenous students, according to Shruti Desai, associate vice president of student affairs for campus life. A search committee has been formed and will be posted in the coming weeks.

The goal is that the assistant director will create “educational opportunities for students to learn more about the history of Native students at Duke, such as the Trinity College Indian Boarding School, while also understanding there is continued work to be done in partnership with our students and the local community to educate, understand, and support Native people,” Desai wrote in an email to The Chronicle.

NASA’s advocacy draws parallels with national-level advocacy. Following the report, Secretary Haaland announced “The Road to Healing,” a year-long tour that will record the oral histories of survivors and descendants of Federal Indian boarding schools and provide trauma-informed support to Native communities.

For Guy, Indigenous advocacy is a story of healing, as well as strength.

The Urgency of Now: Duke must take action to support Native American students 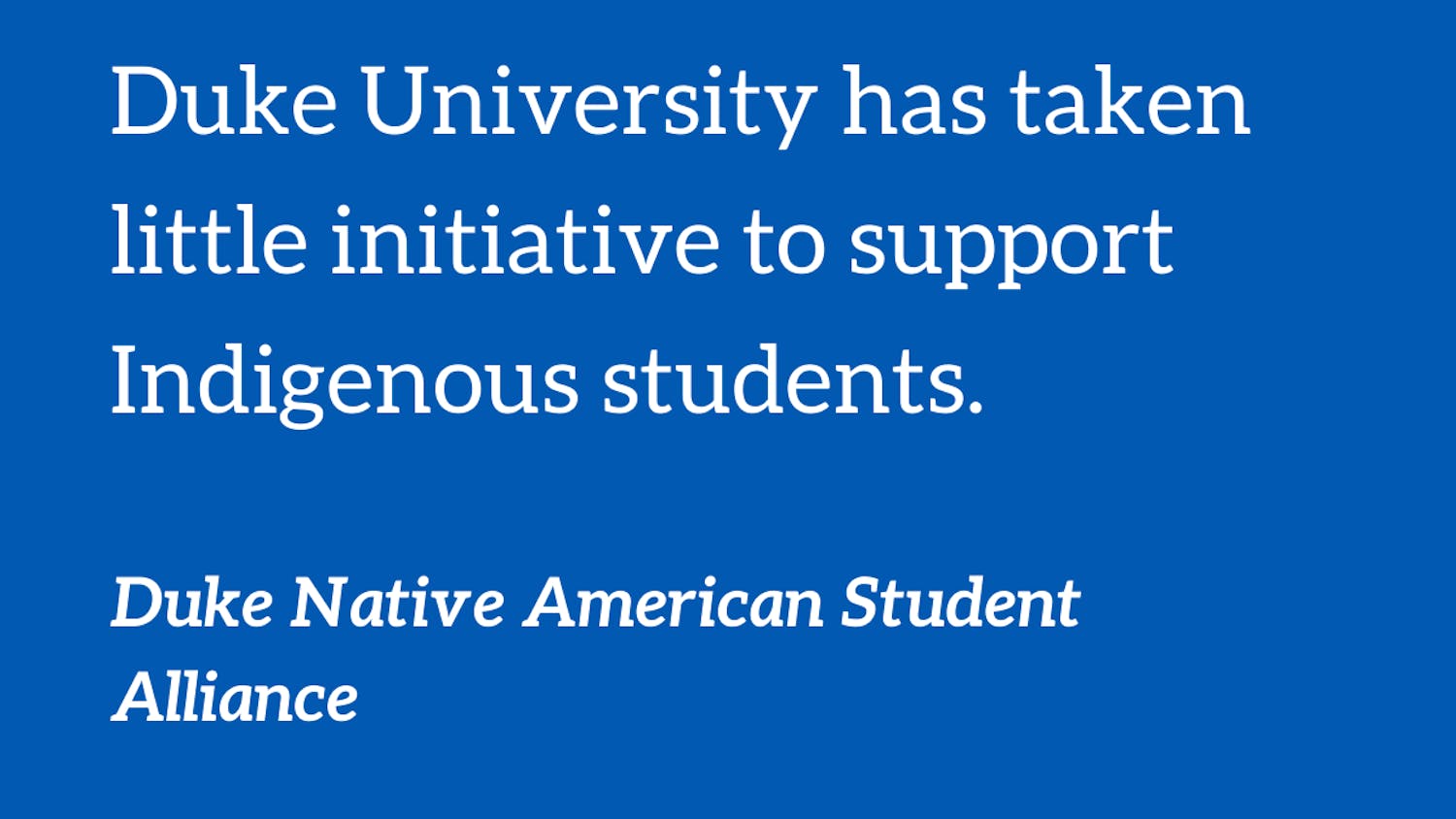 “The goal here with our advocacy, in getting them to recognize [and] understand this history and our asks ... is because above all, we hope for healing. This isn't us trying to just be extremely negative and just complain,” she said. “I think Duke needs to help initiate that healing, because that's the most important part of this.”