This is the fifth in a series of Duke’s All-Decade teams, as named by various Chronicle writers, past and present. At the end of the series, you will be able to vote for your own All-Decade team, and your votes will determine The Sports Blog’s final choice. Stay tuned over the next two weeks for more All-Decade choices.

Dear friends, I'm back! You all must have been very nice boys and girls this year because this Christmas, you're getting the gift of a Shiner column—which has a utility ranking somewhere between that of a lump of coal and a used Tamagotchi pet, I know, but roll with me here. I'm a little rusty (I've been covering a completely different sort of sport these days), however, now that I live in Washington, I'd like to think of this return as comparable to Michael Jordan's second—that is, one that never should have happened yet I, as the returnee, still think is a great idea. So without further ado, Duke's biggest busts of the last decade. It's admittedly not so much a team as it is a list that will annoy many an online commentator and Coach K, if he ever reads it. But if the holiday season isn't a time where we can gather around in the glow our own snark, then I don't know when is.

No. 5: The Transfers and Decommits.

So I acknowledge from the outset that this one's a curve ball. It would be all-too-easy to pick the 2006-2007 Duke squad for this list (though if you feel like you must read at least tangentially about that team, skip ahead to No. 1). But disappointment—at least in my book—implies initial expectations, and if that's your metric, then the J.J. and Shelden-led Blue Devils are on the list. In 2005-2006, Duke played 22 regular season games as the No. 1 team in the country, won an ACC Tournament title and earned a No. 1 seed in the NCAAs. Oh yeah, and J.J. Redick was National Player of the Year. All of these things were wonderful. But when said NPOY goes 3-for-18 from the field (and 3-for-9 from behind the arc) for 11 points in a Sweet 16 upset loss to LSU, it's a little disappointing. Two NBA lottery picks that year and seven McDonald's All-Americans—usually a formula from which you'd like to expect a bit of a deeper run in the Tourney. I'm not saying, I'm just saying.

A highly-touted Blue Devils big man with an unremarkable college career (that only happened once! See: No. 1). Came to Duke as the No. 7 power forward in all the land, left it as the guy who eventually told the first openly-gay NBA player, "As long as you don't bring your gayness on me, I'm fine." I refuse, on principle, to waste another word justifying this decision.

Maybe I'm biased because I'm from Chicago and this affected me as a fan more directly, but boy, was this awful(ly dumb). With the No. 2 pick in the 2002 NBA Draft, the Bulls selected the Blue Devil point guard as a guy they thought could be an immediate impact player.  A year later, Williams almost lost his life when he slammed his brand-new motorcycle (which he was not licensed—and contractually forbidden—to drive) into a pole on Chicago's north side. I am happy Williams, who by all accounts is a good guy, has found a second-life in television broadcasting, but I think many basketball lovers, and almost certainly the point guard himself, wonder what could have been had he been able to develop into a bona fide NBA player.

Incidentally, this class never won a game over UNC in Cameron. Yuck. 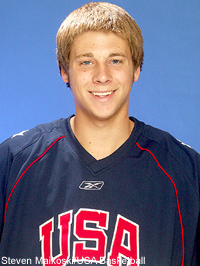 Golly gee, just look at that boyish grin and terrible Ken doll toupée sported by high school Josh McRoberts—so innocent, so promising, so... nice.  A Mickey D's All-American and the No. 2 rated player nationally in the Class of 2005 and No. 1 at power forward, you just want to pinch his Indiana farm-boy cheeks, right?

I don't know when the pinch-his-cheeks impulse turned to an overwhelming desire to punch McRoberts in the face, but as someone who was on campus at the time, I can tell you first-hand it didn't take too long.

To me, the problem with McRoberts wasn't that he was overrated—though he might have been—it was that you never got the sense watching him on the court or even around campus that he particularly wanted to be at Duke. Though, in Duke's defense, I think he would have felt that way in any college setting. He was an exceptionally gifted talent (the guy had mad hops) who was rarely comfortable around the basket, loitered around the perimeter, and averaged 8.7 and 13 points per game in his two seasons with the Blue Devils, respectively. He had the chance to emerge as a leader for Duke in 2006-2007, and all that ended in was an appropriate first-round ousting from the NCAA Tournament at the hands of Eric Maynor and VCU. Josh McRoberts, you are the No. 1 disappointment of the illustrious aughts. Congratulations. At least you've got a NBDL championship with the Idaho Stampede goin' for you, which is nice.

Meredith Shiner is a former sports editor and columnist for The Chronicle. She often misses being able to write for you on a weekly basis, spewing unmitigated sarcasm (in print), and of course, The Chronicle's sports staff—and wishes everyone a very wonderful New Year.