Death, taxes and Leonardo DiCaprio breaking up with 25-year-olds

There are few things more certain than death and taxes. Perhaps one of these things is “Leo’s Law,” or the widely-circulated theory that 47-year-old actor Leonardo DiCaprio simply refuses to date women over 25. Following the star’s recent breakup with longtime girlfriend Camila Morrone, who turned 25 in June, this theory seems to have become all the more indisputable.

The term “Leo’s Law” was first popularized by Reddit user u/TrustLittleBrother on r/dataisbeautiful three years ago with the graphic, “Leonardo DiCaprio refuses to date a woman over 25.” Based on the user’s preliminary findings from a year prior, the graphic showed Leonardo’s age (“yup, he ages linearly”) compared to each of his eight romantic partners.

The graphic was updated following DiCaprio’s breakup with Morrone. 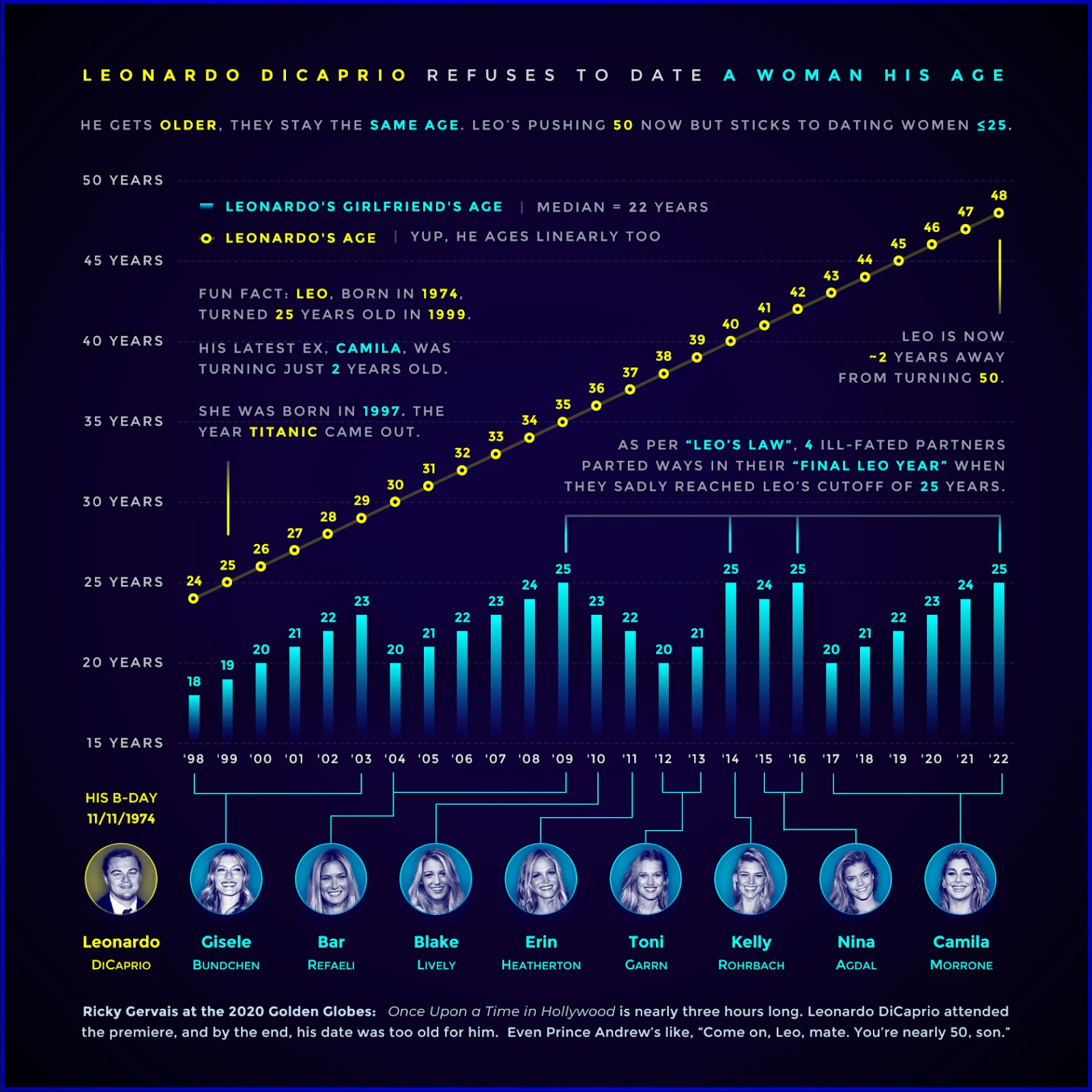 “As per ‘Leo’s Law,’ [four] ill-fated partners parted ways in their ‘final Leo year’ when they sadly reached Leo’s cutoff of 25 years,” the now-deleted graphic read.

News of the latest victim of “Leo’s Law” hit Twitter — and hilarity ensued.

“titanic turns 25 this year at which point i assume leonardo dicaprio will no longer want to be in it,” tweeted writer and comedian Tom Neenan.

Some simply had theories:

“everyone assumes that he is the one breaking up with all these 25-yr-olds. what really happens is that once a woman's brain finishes developing, she realizes she doesn't wanna be with leonardo dicaprio,” tweeted @dietz_meredith, a headline contributor at The Onion and Reductress.

Others, such as writer Sophia Benoit, believed that it was “incredibly incredibly strange” that DiCaprio was “allergic” to dating women older than 25. Indeed, the humor surrounding the situation seems to recognize the uncomfortable fact that his latest ex-girlfriend was born the same year Titanic was released.

So why do people find  “Leo’s Law” so “incredibly incredibly” strange? Perhaps it is because his theorized “cut-off” point is right at 25 — when the prefrontal cortex is expected to fully develop. Perhaps it is because people generally find relationships with large age gaps unacceptable–and when gender is added to the mix, there come fears of older, more experienced men taking advantage of younger women. Perhaps it is all these considerations with the fact that Leo’s Law simply isn’t just Leo’s.

DiCaprio certainly isn’t the first middle-aged man in Hollywood to date much younger women, nor is he the first to do so in a continuous pattern. He’s simply the only one that’s been graphed. Celebrities from Harrison Ford to Johnny Depp have carried out flings, dated and even married women decades their junior. The reverse is less common, but nonetheless still present — Yung Gravy and Sheri Rae being perhaps the most recent instance from out of left field.

Despite widespread criticism, some argue that the speculation surrounding the breakup says more about societal expectations of age than DiCaprio’s behavior.

Following the breakup, Kristen Zang, a former model who dated DiCaprio from 1995 to 1999, defended the actor against “ageist headlines and comments” in a People magazine oped. Zang split up with the actor months after her 25th birthday (“ha, I know what you're thinking”).

“It was a choice I made. I don't [know] how to explain it exactly, I just felt like I was ready for our relationship to be done. It was like I had outgrown that version of myself, the Hollywood high school girl. I wanted to figure out who I was and what I wanted,” she wrote.

If the tabloids are to be believed, DiCaprio now sets his sights on Gigi Hadid, a well-known model, television personality and — perhaps more importantly — a 27-year-old woman. Should the rumors be true, she will also be the oldest woman he’s ever dated.

Like these rumors, “Leo’s Law” is purely speculative. The graph boils down to years and ages–and not much else.

“Who knows what happened. Maybe she really cared for him but was just ready for the next chapter, perhaps it’s temporary, or maybe it’s none of our business,” Zang wrote. “But let's keep the funny memes coming, they're stellar. Truly.”

How did the Duke men's basketball assistant coaches fare as players in Duke-UNC rivalry?

How did Miami knock off No. 2 Duke men's basketball? It all started with an experienced roster

Share and discuss “Death, taxes and Leonardo DiCaprio breaking up with 25-year-olds” on social media.