A few weeks ago, somebody asked a question that stumped me. A high school friend came to visit my dorm room and to see Duke’s beautiful campus. For me, it was uninhibited bliss. I had two or three hours to sing Duke’s praises, brag about my amazing classes, my wonderful new friends, my delicious West Union. By the end of it, she could tell I was in love.

“Is there anything you don’t like about Duke?” she asked me.

I took several minutes to think of an answer. Sure, the C1 is pretty crowded and the walk to Shooters is a pain, but I couldn’t think of anything that I hated about Duke.

Of course, I had been sick for five weeks. I figured that was just a formality, though. The illness was a vital rite of passage, and it even had a name: “The Freshman Plague.” All of my friends were sick. We coughed and wheezed and didn’t sleep through the first few weeks of school. Student health offered little relief. It seemed that almost everyone I knew was having a similar problem. We would go about our days, carrying with us a mild cough and a runny nose. It was nothing unmanageable. But as soon as we got into our dorm rooms and laid our heads down to sleep, we couldn’t breathe. Coughing attacks kept us up into the night. It felt unlike a common cold or even a “Freshman Plague.”

Yet we continued to ignore the illness, taking student health’s advice to just “wait it out.” The first warning sign came from the third floor of Wilson. After two unfruitful trips to Student Health, our friend called maintenance, asking them to check her room for mold-related allergens. It seemed unlikely that anything would come of it, but both she and her roommate had been experiencing symptoms that exactly matched typical reactions to mold. Duke followed up promptly on the request. Several men came into her room, opened up her air conditioning, and tested the floor unit with several cultures for of mold.

The next day, Duke moved our friend to Bell Tower for the weekend so that they could fumigate her room. While she appreciated the temporary upgrade, she didn’t appreciate finding out that the mold was likely to have spread into the walls. Upon going back to Student Health and testing positive for mold-induced bronchitis, she was prescribed a medical inhaler. Her lungs were at 40 percent of their normal capacity.

When my roommate was diagnosed with bronchitis as well, we assumed at first that it must have been contagious. Surely they had shared a drink or two, or eaten with the same fork. Germs spread like wildfire when you live in such close proximity to so many people. Not to mention, college is a physical adjustment. Not only are we coming into contact with new bacteria and viruses, we’re adjusting to new sleep schedules and workloads. However, on a whim, we decided to open up our air conditioning unit. We had so much trouble breathing in our room that it seemed like a plausible option.

Below is a photograph, not for the faint of heart, of our air conditioning unit underneath the filter taken on Sept. 30: 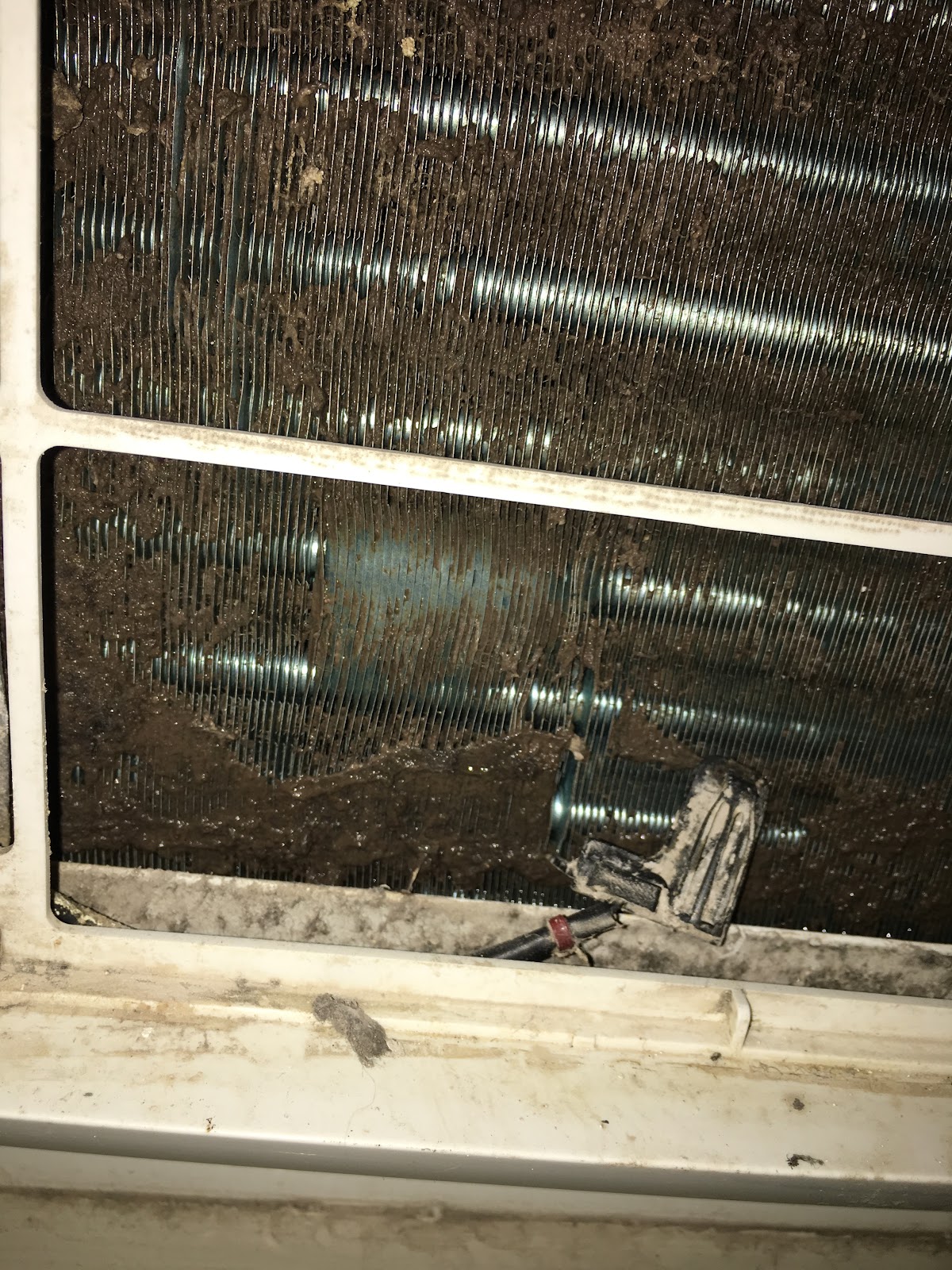 We weren’t sure if it was anything out of the ordinary. We called our RA, who seemed shocked at the sight of the caked up grime in the coils of the filter. She called our residential coordinator, who assured us that someone would come to clean up our unit the next morning. By 6:00 p.m., no one had checked in. Two days later, I called the on-call facilities staff myself, who sent someone over quickly.

I found out that it was a pretty quick fix. Maintenance sprayed the air conditioning unit’s coils with coil-cleaner, I rinsed out the dust from the filter. We wiped the surrounding area with Clorox wipes I brought from home. The next night, I could finally sleep in my own room. The shift was nearly immediate and incredibly shocking—one night I was desperately taking Benadryl, NyQuil, anything that could help me sleep through my cough. The next night, I slept like a rock. The air felt clean and my lungs felt clear.

I live on the third floor of Giles. Giles was renovated this past summer, making it the most recently renovated dorm on East Campus. Duke poured resources into making Giles beautiful—our kitchen, common room, and bathrooms were built with a budget of $3 million. This budget sounds like ample funding to provide a “quick fix” to all of the air conditioning units on East.

Now, lest I make us students sound like spoiled brats, let me concede that we are extremely fortunate to even have air conditioning units. A few years ago, most of the East Campus dorms were left to the elements in the heat, with only industrial fans to cool them. And of course, a dirty air conditioning system is a small problem on the grand scheme of things.

But in the end, this a question of allocation of resources. How can the university justify spending millions on cosmetic renovations while sacrificing the health of its students? My friends in several other dorms across East have opened their air conditioners to discover the same problem. Hopefully, for future generations of students, the university will give these units a checkup before the semester begins; otherwise, you can bet on seeing a lot more inhalers around campus.Leah Abrams is a Trinity freshman. Her column, “cut the bull,” runs on alternate Fridays.

Open letter: It's time to abolish IFC and Panhel

Editor's note: Why we're moving to one day a week of print

Open letter: It's time to abolish IFC and Panhel

As students move in, here’s what life at Duke will look like amid a pandemic

From administrators to animals, here's who you need to know at Duke

How to Read The Chronicle