Senior Daphne Ezer was awarded the esteemed Marshall Scholarship this year for her significant laboratory research and undergraduate achievements. 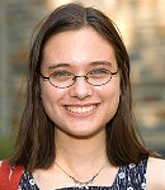 Already a highly experienced computational biologist following her undergraduate research at Duke, Ezer said she aspires to use the scholarship to pursue a doctoral degree in genetics at the University of Cambridge.

The highly selective Marshall Scholarship, which was established in 1953, annually finances two years of graduate-level study in the United Kingdom for up to 40 young Americans.

“I knew right from the onset that she had a commitment to research and was a really special student in that regard,” said Duke computational biologist Alexander Hartemink, who supervised Ezer’s undergraduate research. “I am really proud of her.”

Ezer, who is a biology and computer science double major from New Jersey, had completed research in computational and mathematical biology even before arriving on campus her freshman year.

“She contacted me when she was still a high school student and was very eager to do research in my group,” said Hartemink, who is also the Alexander F. Hehmeyer associate professor of computer science, statistical science and biology. “I was really surprised and impressed that she was already on the ball.”

Ezer is an Angier B. Duke Scholar, Faculty Scholar and president of the Duke chapter of the Association for Computing Machinery. She was also an organizer of the 2011 National Undergraduate Bioethics Conference, a winner in the undergraduate division of the Duke Start-Up Challenge.

Alex Rosenberg, director of the Angier B. Duke Memorial Scholarship Program and R. Taylor Cole professor of philosophy, said the program has a history of producing Marshall Scholars because it attracts students interested in this type of opportunity, such as Ezer.

“Daphne is a perfect example of the student we aim to bring to Duke,” Rosenberg said. “It’s because they do so well at the research that make them great candidates for these scholarships.”

After graduation, Ezer plans to work with Cambridge researcher Boris Adryan to work on predictive models of how genes are turned on and off. Although research is important, Ezer said the impact of research on the larger world must be considered as well.

“Research is only half of the process of science. For science to have any impact, research must be shared with others,” Ezer said in a news release Tuesday. “Once knowledge is communicated, it is public knowledge. It can be used and misused by anyone. Therefore, scientists must consider the ethical or policy implications of their work.”