Head coach Mike Elko continued his winning streak with a Saturday blowout against North Carolina A&T. Sophomore quarterback Riley Leonard started the first quarter with a 38-yard pass to junior tight end Nicky Dalmolin, scoring a touchdown within 15 seconds. Leonard continued his dominant performance throughout the game, completing all 11 passes in the first half for 155 yards and finishing the game with an 11-of-12 completion rate. The momentum didn’t stop there, as Duke concluded the first quarter with a 21-0 lead, keeping a decisive advantage throughout the second and third quarters and ending the game 49-20. Saturday’s starting play solidified the Blue Devils’ pattern of explosive starts—in previous games against Temple and Northwestern, Duke scored its first touchdowns at 3:03 and 4:30, respectively.

This was a week of not only stunning starts, but also nail-biting ends. Junior midfielder Maggie Graham led the women’s soccer team to a 1-0 victory against Syracuse Friday courtesy of her clutch goal with just 1:44 left on the clock. Graduate midfielder Mackenzie Pluck and senior midfielder Sophie Jones coordinated in and out of the box to send the ball to Graham, who fired her fourth career goal against the Orange into the net. Graham’s 89th-minute winner came after a rough first half, during which Syracuse led 5-3 for shots. However, the Blue Devils picked up the steam in the second half, bombarding the Orange 11-1. With this goal, Duke ended Syracuse’s six-game winning streak, leaving the Blue Devils’ record at 6-2-0 overall and 1-0-0 in the ACC.

The rivalry was as tense as ever at Friday’s matchup between the Duke and North Carolina men’s soccer teams. When the dust settled to show a 1-1 draw, referees were spent after meting out 29 fouls—17 to North Carolina and 12 to Duke—and showing five yellow cards throughout the game. The Blue Devils started strong with junior defender Amir Daley’s first goal of the year within the 10th minute, but the Tar Heels soon retaliated after junior forward Akiem Clark tied the score just 29 seconds later. As Duke aggressively pursued the game-winning goal with 10 total shots and four shots on goal, its defense limited the Tar Heels to only four total shots. Despite both teams’ efforts to eke out a victory, the 90 minutes ticked to an end with the 11th draw in series history between the two teams.

On Saturday, Duke women’s volleyball swept Harvard 3-0 for its ninth-consecutive win of the season. With a 9-2 record, the Blue Devils hold their best streak in program history since their 10 consecutive wins in 2014. Freshman outside hitter Taylor Atkinson displayed her stunning offensive capabilities, leading the team with 14 kills—double that of Harvard junior Katie Vorhies, who led her team with seven—and senior setter Camille Nazor displayed her versatility with six kills, three aces and 32 assists. While the Crimson took a 6-4 lead at the start of the first set, Duke turned the tide with three service aces in a row, ending the set 25-16. The Blue Devils continued their dominating performance, ending the second and third sets 25-21 and 25-14, respectively. 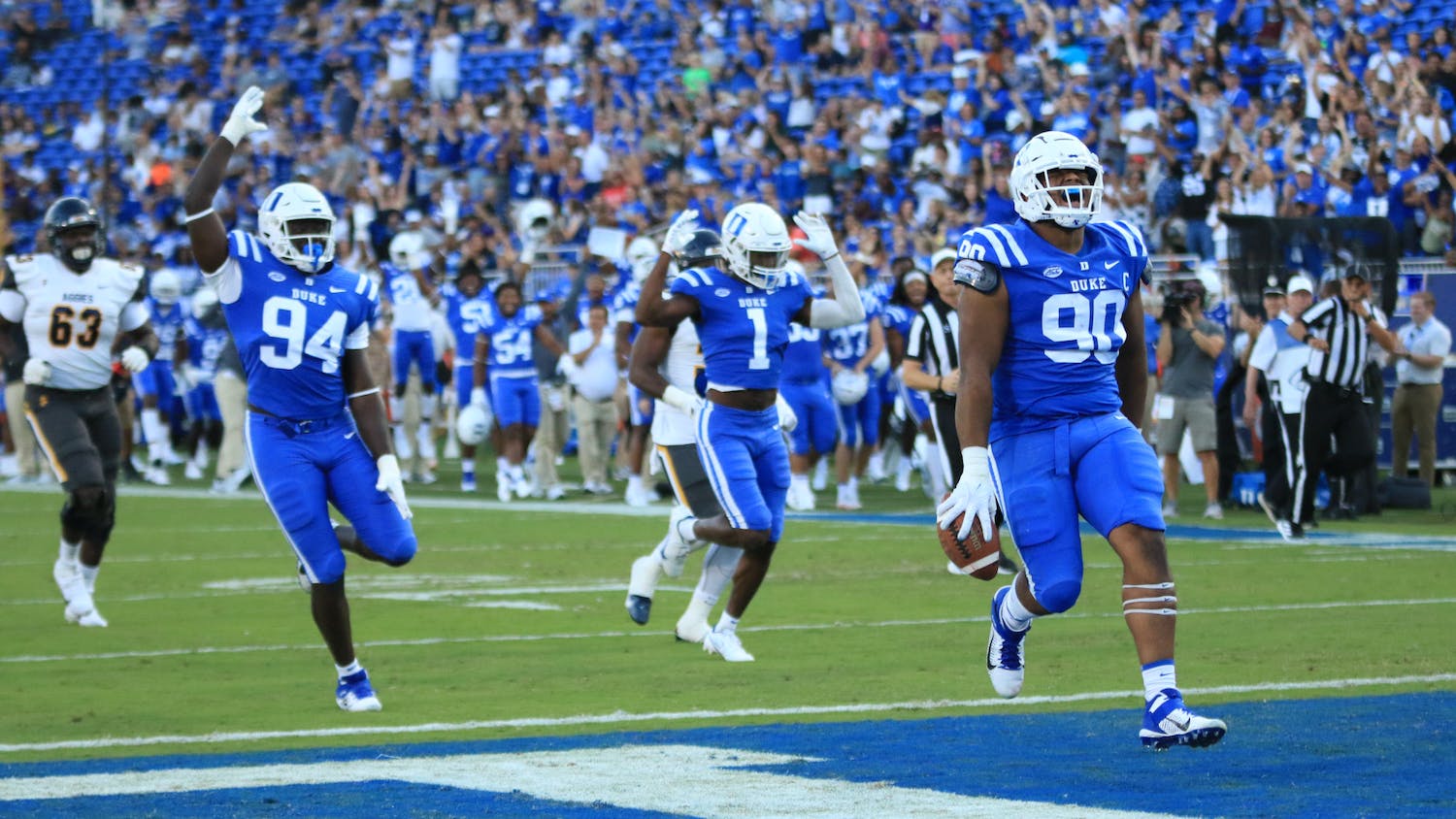