Recently I wrote a piece on the changes made to the Bryan Center, explaining how they would hurt various centers and their connections to students on campus. Well, students have now become acclimated to campus and returned to the various spaces in the Bryan Center they call home. Many people of color on campus recognized and explained that these changes would ultimately cause disruption amongst the spaces meant for marginalized groups. Despite this, upper level Duke administration, who seldom ever visit these spaces, decided to disrupt the lives of students and staff anyway. Now, I have to see a space that I was able to call home stripped away from the students who will come after me.

On September 1st and 2nd, I visited the Career Center, which is now hosted in the spaces once used by the Center for Multicultural Affairs (CMA). To my surprise, the room formerly hosting CMA: LA Casa was completely empty. There was nobody, not even staff, present. Even after the 1:15 PM post-class rush, the former CMA: AAPI Base space was completely empty. There were more students studying right outside the Career Center than actually using the Career Center itself. Murals put up by the CMA remain on the walls of the Career Center, but the space is now empty with the lights turned off. The murals have turned into a symbol for upper-level Duke administration’s typical approach to DEI initiatives and issues: empty decorations. This area, even according to the survey done by Sasaki, the design firm hired by Duke to solve spacing issues, used to be heavily populated by AAPI and Latinx students on campus. Just last year, they were studying, eating, and, ironically, passing along career advice.

It is extremely odd that upper-level Duke administration chose to displace Latinx and AAPI students into smaller rooms, only to not utilize the space they took. Not only is it insulting to the decades of activism revolving around these spaces, it is insulting to the mission of equity that many argued for the Career Center. When this decision came to be, many argued the Career Center would promote equity by supporting the careers of marginalized identities on campus. I received many messages, typically from those who don’t identify with these groups, trying to invalidate my experience as a LIFE Latinx student on campus. The CMA used these spaces to offer services (which I myself utilized) such as the Organic Chemistry learning group, workshops on activism and organizing, advice on student group efforts, casual events run by student staff, and collaboration opportunities across cultural lines for students. The CMA still offers these things, but it is hard to see a place that once hosted many student needs go unused.

When Duke commissioned Sasaki to compile a campus climate report on spacing issues last year, one of the top concerns they identified was that “additional meeting and event spaces are needed to support student group activities”. Sasaki’s report focused on how to put the Women’s Center, Graduate Students, and the Career Center into the Bryan Center. They suggested that part of the space currently taken by the Career Center go to either the Women’s Center or Graduate Students. Duke took neither of those suggestions. Instead, the Career Center increased in space at the expense of the CMA, Prayer Spaces, International House, and the Center for Muslim Life. Additionally, the Women’s Center was placed in BC101, students lost programming in La Casa and AAPI Base, graduate students were placed in the cultural affinity space, and the Career Center took up the entirety of the bottom floor. Beyond being an insult to student activists, this begs the question: was the report good for anything except spending money?

When I wrote my previous column, many faculty of color reached out and supported me. They agreed that these various centers are in fact an aspect of wellness and that it does not follow the QuadEx model to put the Career Center in the Bryan Center. QuadEx at its core is a brilliant initiative on Duke’s part. It is an initiative that promotes equity, equality, and care into student social life. However, as is typical for a predominantly white institution, Duke has left its students from marginalized backgrounds in the dark about many of the changes and refuses to meet their needs. These students must remain in the conversation, there is no reason that a more equitable cultural space can not also be in QuadEx conversations.

At the same time the Career Center was empty, Latinx students sat on the floor of their own space and had to grab chairs from across the Bryan Center. Nowadays, CMA: La Casa becomes crowded for the students in it and the minimal seating given to us by upper level Duke administration fills up quickly. The solution is very clear and evident: a Latinx center or a freestanding multicultural center. Duke likes to dance around this solution and act like it has met student demands with temporary, inadequate solutions. The current space now is a “temporary solution” but the renovations could take anywhere from 3-5 years for students. For students like me, this “temporary solution” is the rest of my Duke career. After a year of demands, teach-ins, and a petition garnering almost as many responses Sasaki did for their campus climate survey, upper level Duke administration ruled against supporting Latinx students on campus.

Furthermore, it is even more strange that Duke chose to put DSG and DUU, two student groups not known for having the best relationship with identity and cultural groups, into the space that is supposed to promote inclusivity. Many students have often complained that these organizations do not serve the interests of cultural organizations but rather create insignificant change on campus. In the combined space, DSG now has more stake in the affinity space than most affinity groups on campus. The office now maintained by DSG previously belonged to Black students in NPHC. DUU now has a larger meeting room than the space designed to host all Latinx students on campus. If Duke wanted to uplift cultural groups so urgently in this move, then it is baffling to host these non-cultural groups not just hold an area in this new space, but almost a third of it.

In all, Duke’s priorities are off to say the least. It has torn apart community cultural spaces in favor of predominantly white systems such as DUU, DSG, and the Career Center. It pretends that these are equitable changes, when the most obviously equitable change would be to serve Latinx and AAPI students on campus directly. Despite these issues, students from marginalized backgrounds will continue to organize and fight for their right to be here comfortably. I don’t doubt there is a strong future here; unfortunately, it will be built on the back of student labor. My advice to students is to take care of yourself, and enter the spaces meant for you with pride. Get involved. I may not be able to restore and see La Casa as I knew it again during my time at Duke, but I will certainly organize to make sure it's easier for other students like me to fight for it.

Anthony Salgado is a Trinity junior. His column runs on alternate Tuesdays. 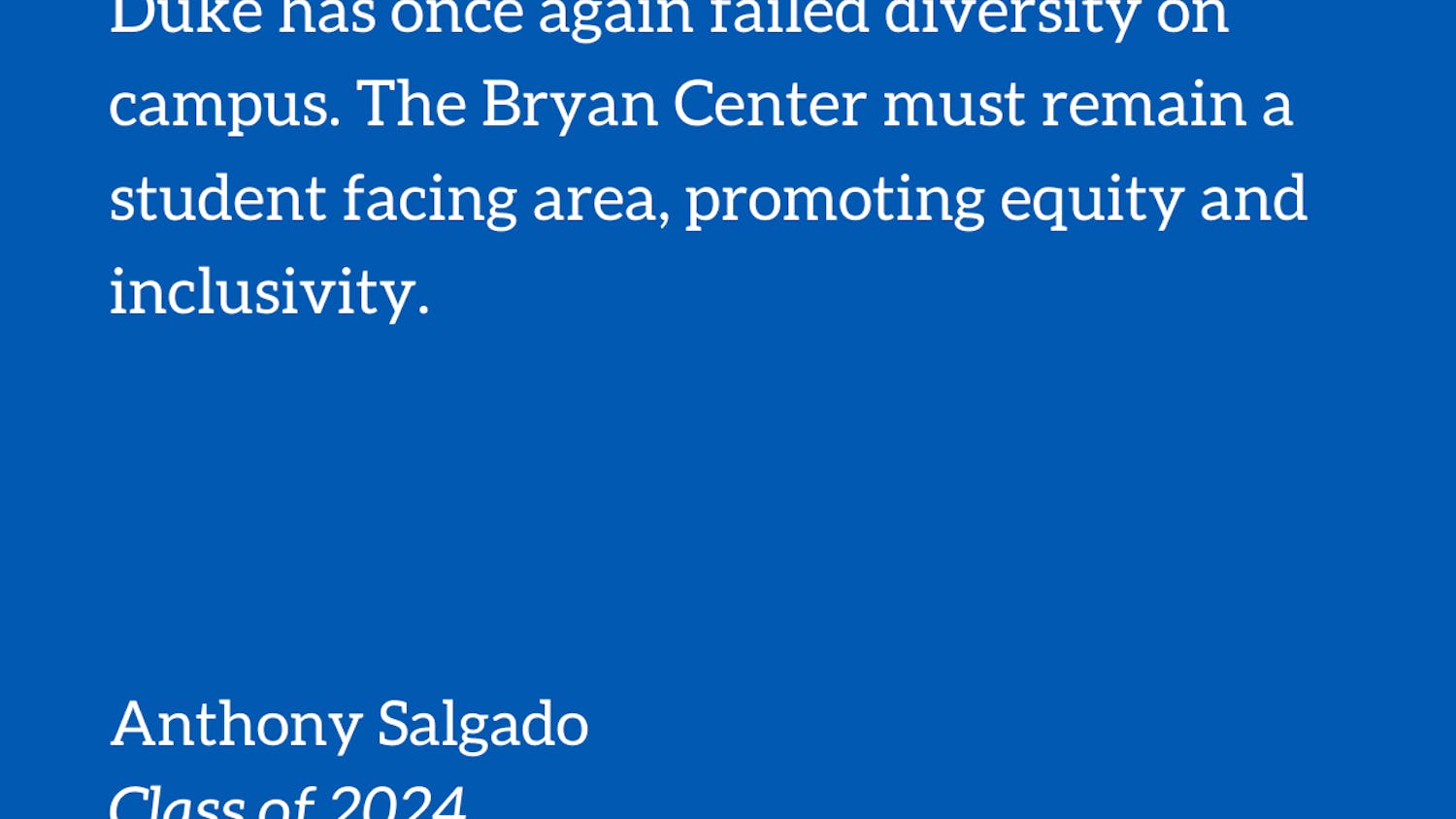 Share and discuss “The Empty Equity Center” on social media.