Downtown Durham's 5 Points Gallery recently exhibited the work of the city's own Jim McKeon as their featured artist to kick of 2022. Here are some highlights of his works on exhibition. 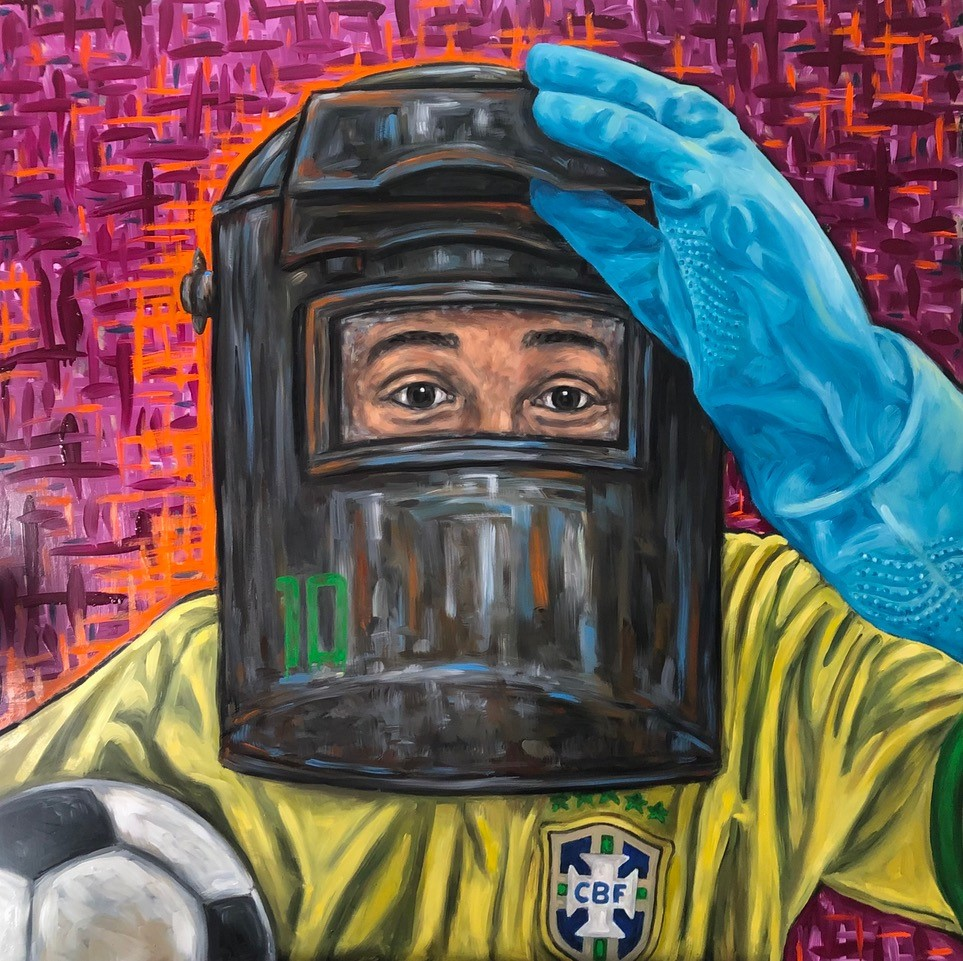 In this painting, we see a child dressed in a soccer shirt and holding a soccer ball, clearly ready to hit the field and play ball. What creates a surprise effect is the bulky metal mask,  resembling radiation protection buckets in the early 1900s, and a blue surgeon’s glove. This playful exaggeration of the pandemic new normal shows children’s resilience and adaptability in the past two years. Often, children demonstrate more openness to change than adults.

As McKeon commented, “I think the one thing that kids are showing us is that they're not out there screaming and fighting against each other. They just accepted the fact that, hey, this is going to help all of us and it's going to keep all of us safe. There seems to be much more of a united front with the children.”

Assembling soccer gears and pandemic protective wears in the same frame communicate a sense of acceptance and optimism amidst fierce uncertainty. By pointing the focus to children, who are symbols of hope for a brighter future, McKeon adds another layer to this optimism. 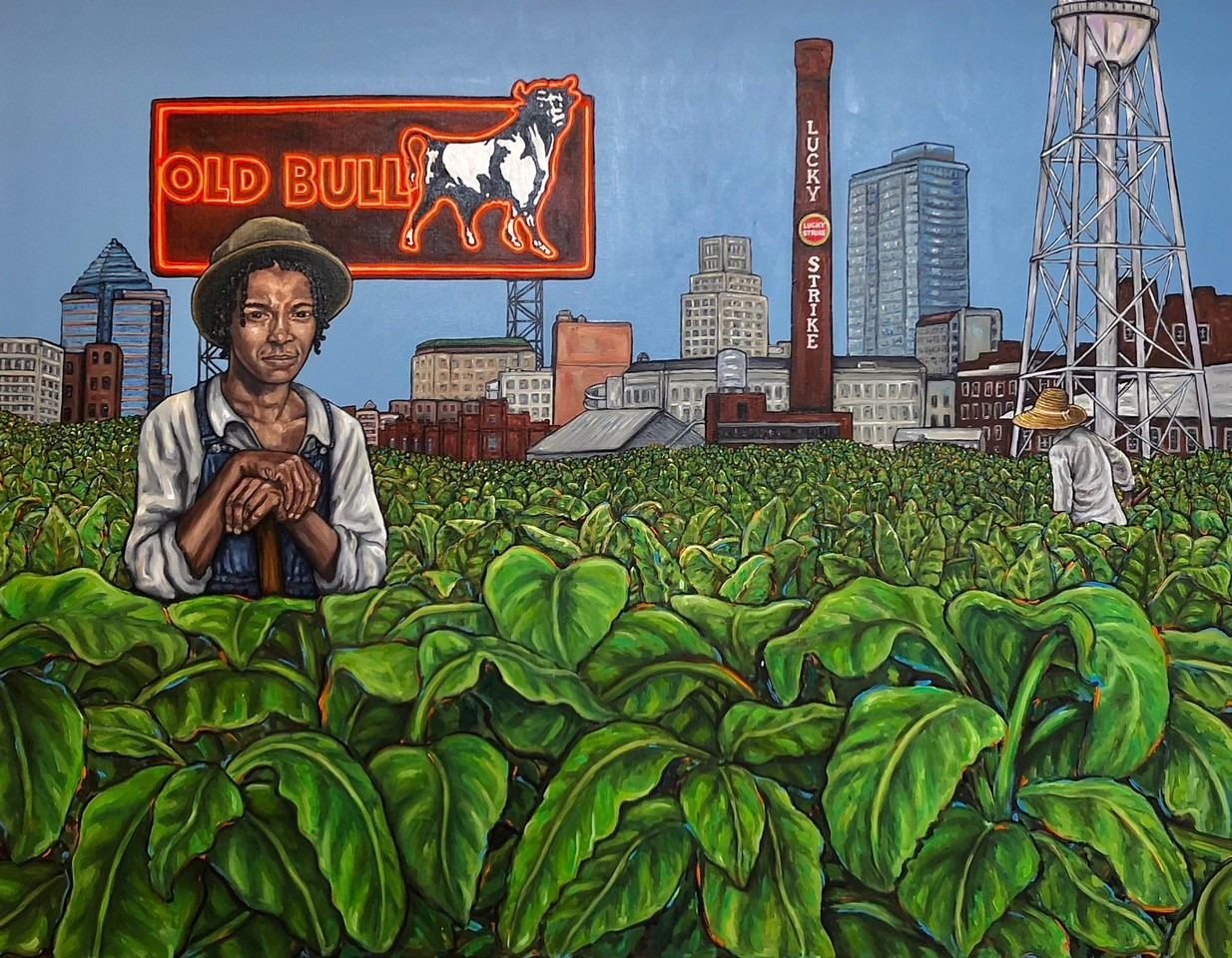 Sharecropping was a reality not too remote from modern-day North Carolina. This practice operated in open forms until at least the 1960s. McKeon points to the fact that sharecropping still exists, albeit in more covert forms, for instance, landlords hiring undocumented non-English speaking immigrants and paying them pitiful wages.

The background in this piece features reconfigured actual architectural sites in Durham, including the Lucky Strike Tower, the American Tobacco Tower, and the “OLD BULL” billboard sign. McKeon said he portrayed the billboard in this specific direction so that it faces the viewers. With an implicit pun – “Old Bull” and “Old Bullsh*t”-- the billboard serves as a caption for the practice of sharecropping and all forms of economic and social suppression.

When asked about whether we should turn people represented by the sharecroppers in this picture into shareholders of shared prosperity, or forget about the distinction between “sharecroppers” and “shareholders” altogether, McKeon noted that he wanted people to start thinking about ways to deal with inequity, not necessarily providing a definitive approach to solving it. “We need to have a more level starting point,” he says. “Everybody should have a fair shot. I don't think that that's unreasonable.” 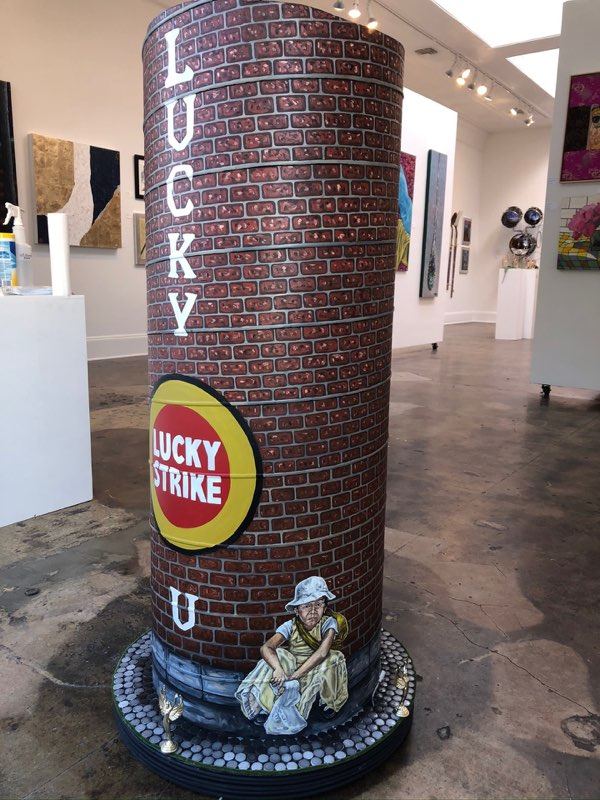 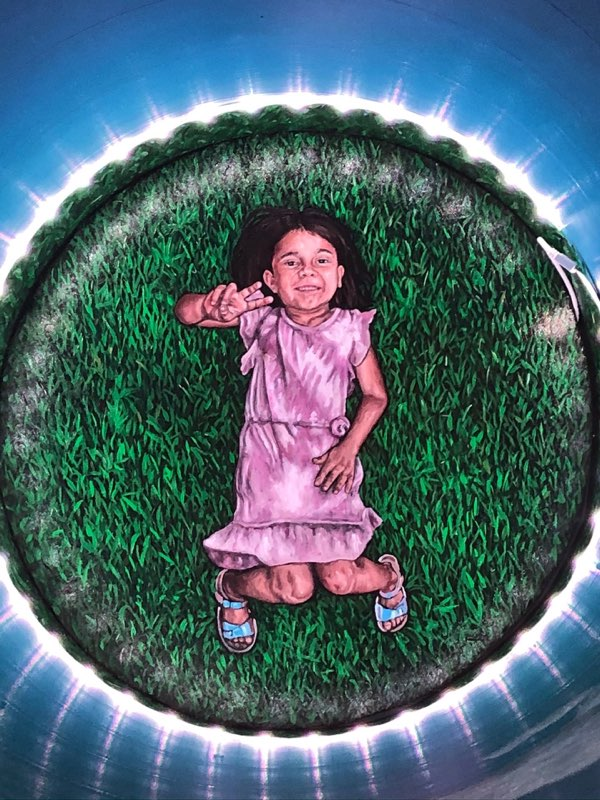 This is a 3D installation art made from a discarded aluminum air conditioning pipe. The exterior of the pipe is painted to look like the Lucky Strike Tower in Downtown Durham, with an impoverished girl sitting at the bottom. The inside of the pipe shows the same girl lying on the grass. Yet here she is dressed neatly, well-fed, smiling and holding the victory sign with her hand.

The artist used a wordplay of “lucky”, contrasting the more fortunate version of the girl’s life inside the pipe with that on the outside. Through this stark and straightforward contrast, McKeon shows viewers how arbitrary our lots in life can be – one can be born in poverty just as easily as one can be born in full prosperity. The pipe itself also stands testimony to this notion that fate is fickle. One minute, it was still a piece of garbage on the street; the next minute, it was a piece of art in a gallery.

“Two Turntables and a Microphone” 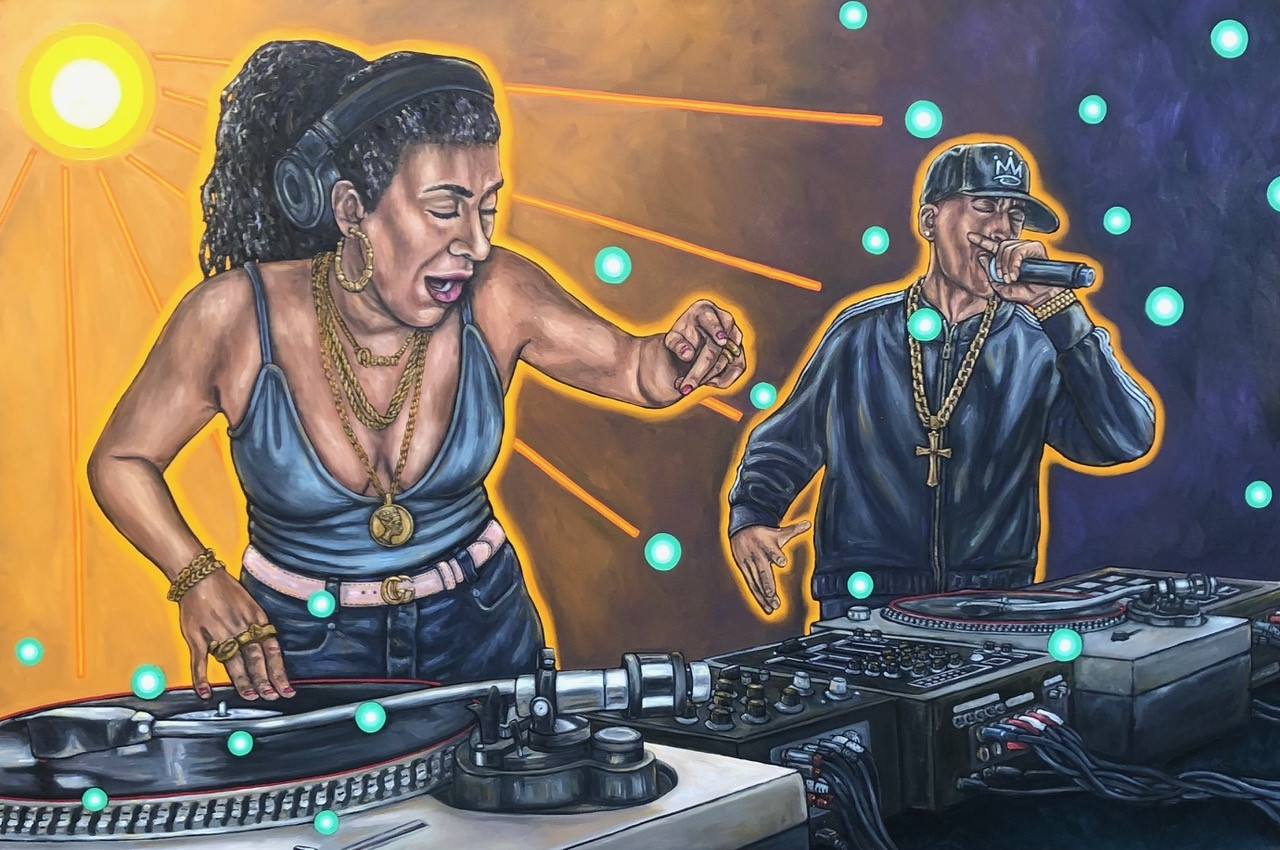 Like many other paintings by Jim McKeon, there are little concentric green circles floating in the background. “In each painting, they’re there for different reasons, but overall it’s to give the painting a sense of movement” McKeon explains. “From a subjective point, the little balls could represent music. They could represent the stars. They can represent fire sparks. [They] also remove the painting from reality. Give [the painting] a little bit of mystery and magic. [They] give you [an] other-worldly feel, like a dream state.” He also draws attention to the fact that the subjects in the painting do not exist in a vacuum. There are tangible elements, like particles in the air, and intangible components, like people’s interconnections and shared intentionality, that make up the flow in the ambiance.

Intentional contour lines, flattened background shapes, and floating concentric circles create movements and “give his figures context”, as McKeon puts it. They merge real and imaginary realms in his paintings. Another set of duality also manifests in his works: lightheartedness as in “Two Turntables and a Microphone” and gravity as in “Share Croppers and Share Holders”.

Upon relocating to Durham, North Carolina, and seeing the difference in people’s framework of thinking towards issues such as racial equity and civil rights, he started directing some of his works toward weighty topics that include social rights. “[I felt like] my work has to speak," McKeon said. "I have to jump into the fray."