It’s been two years since Duke last played and beat Virginia Tech, but this time around, it was the Hokies who came out on top.

No. 15 Duke began its conference slate Thursday night in the team’s first match since the holiday break. After finishing its nonconference games with an impressive 9-1 record, the Blue Devils arrived in Blacksburg, Va. for a battle against Virginia Tech. But the battle turned one-sided, with the Blue Devils suffering their first blowout loss of the season 77-55.

“We had enough talent here to win the game, and we were outplayed,” head coach Kara Lawson said at the postgame media conference. “That’s the story. And there may be games we have certain players, and we don’t have certain players. And I’m not going to sit up here and ever want to complain about that.

“The story is they outplayed us, and we weren’t good enough tonight to win the game on the road. In the ACC, you got to be good to win on the road.”

Wing Elizabeth Balogun led Duke (9-2, 0-1 in the ACC) with 22 points, three blocks and four rebounds, her best of the season. Point guard Vanessa de Jesus followed with nine points and four rebounds. But ultimately it was not enough.

Duke’s best run came at the beginning of the second half. The Blue Devils scored their first trey of the contest on a de Jesus’ attempt and paired with help from Elizabeth Balogun, the Blue Devils cut down the Hokie lead by scoring seven points in the first four minutes of play. Despite the burst, Duke’s 17.4% third quarter shooting clip to Virginia Tech’s 46.7% mark kept the Blue Devils from gaining more ground.

Duke was unable to produce the second-half surge that the Blue Devil faithful have seen time and time again this season, and for the third time in the contest, the Hokies (10-3, 2-0) finished the third quarter with a significant lead on Duke. The Blue Devils were outscored 20-10 to make the score 59-31, the heftiest lead another team has had against Duke all season.

The loss of Day-Wilson, the team’s leader in 3-pointers this season, made a huge difference given that Duke ended the night with only a 3-of-18 clip from 3-point range to Virginia Tech’s 9-of-22.

“We wish we made more shots than we got. We missed some layups. We missed some open threes,” Lawson said. “I thought they did a great job on both ends tonight, you know we weren’t up to the task and we didn’t play to the level of energy [Virginia Tech] did.”

Although there wasn’t a clear leader at the beginning of the contest, the match quickly turned around in those first 10 minutes. With two minutes left on the clock in the first quarter, Virginia Tech turned a two-point lead into eight due to the efforts of Hokie starters Elizabeth Kitley and Kayana Taylor. The Blue Devils finally managed to end the 7-0 run thanks to two free throws from Balogun, but it wasn’t enough to regain the momentum with which the team began the game.

“I think Virginia Tech played really well. I thought they shot it really well,” Lawson said. “We put them to the line 20 times. Obviously, they made all 20 of the free throws…just to credit them offensively, they shot a great percentage. They really did a good job of getting to the line and finishing. So I would say that was probably one of the differences.”

The Blue Devils will take a three-day break before starting 2022 with a contest against Notre Dame Jan. 2 at Cameron Indoor Stadium.

“We didn’t do our job tonight, and hopefully, the next game will be a little bit better,” Lawson said.

No. 15 Duke women's basketball drops first game of the season against No. 1 South Carolina 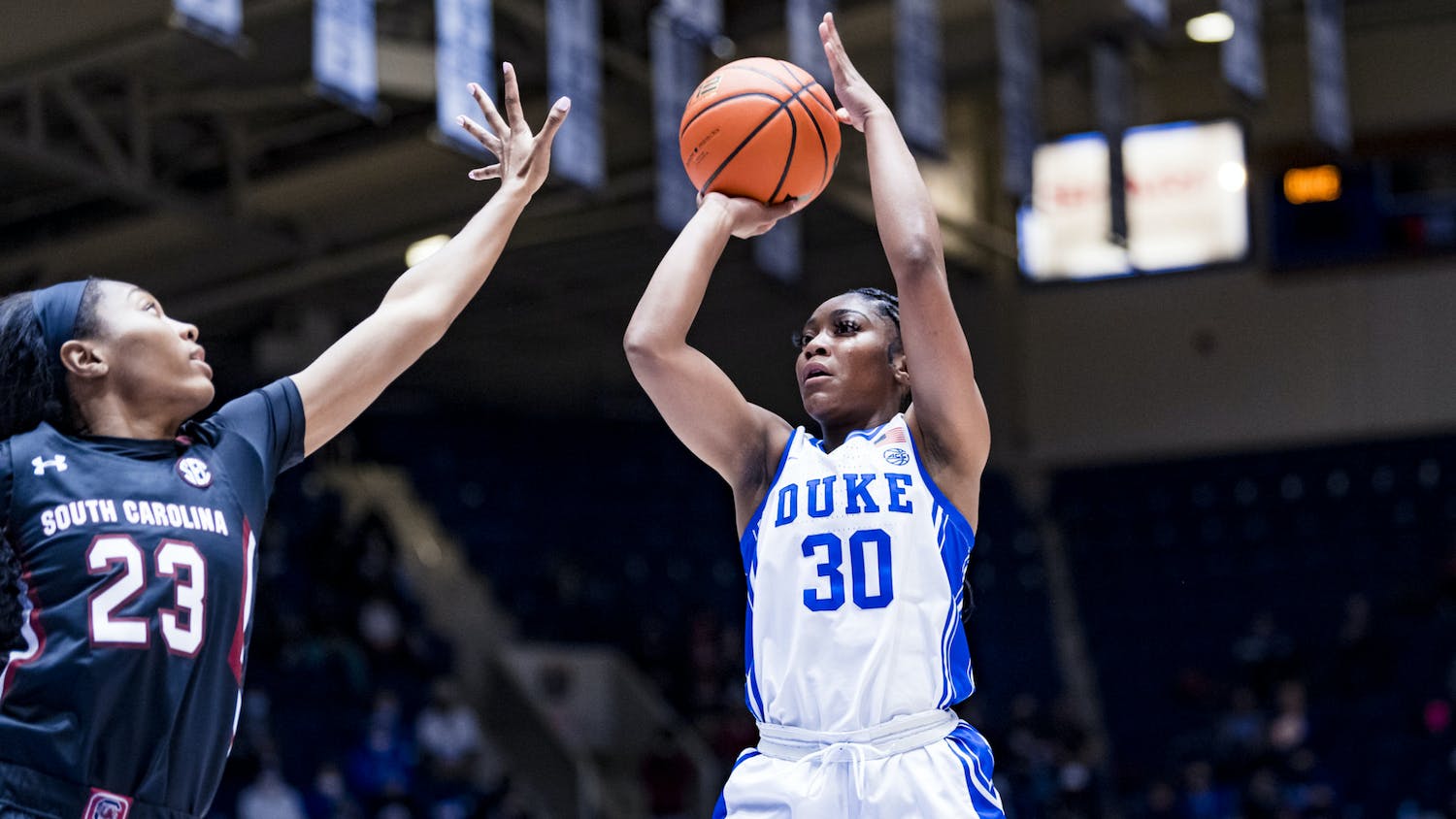 Ana Young is a Trinity sophomore and an assistant Blue Zone editor of The Chronicle’s 118th volume.