Every football game, our beat writers Cam Polo, Jake Piazza, Max Rego, Alex Jackson, Micah Hurewitz and Jonathan Levitan will be here to give you their picks for Duke's upcoming matchup, and we'll keep track of their prediction records every week. This week, Duke hosts North Carolina A&T at 8 p.m. at Wallace Wade Stadium, where it is a 21-point favorite.

Duke is back in Wallace Wade Stadium, and it's going to play like it. Behind another dominant performance from running back Mataeo Durant and an efficient evening from quarterback Gunnar Holmberg, the Blue Devils are going to send North Carolina A&T home with a loss. I do expect Aggie running back Jah-Maine Martin to rush for over 100 yards against this Duke defense that struggled to tackle last week, but it won't be enough to stop head coach David Cutcliffe and his squad.

The Blue Devils are staring a bounce back opportunity right in the face. The Aggies allowed 362 yards through the air in their loss to Furman last week, so Holmberg should feel right at home in more ways than one. Add the fact that the North Carolina A&T offense was 25% on third downs, and there’s a reason Duke is a three-score favorite Friday. While I think the Aggies keep it close for a half thanks to Ron Hunt giving the Blue Devil secondary fits, Duke should come out on top.

Fool me once, shame on me, fool me twice, well, can’t get fooled again. Last week I picked Duke in what should have been an easy victory. This week I’m sensing a return for the Blue Devils and I'm hoping they don’t let me down twice. Durant, Holmberg and the offensive line all showed great promise in Week One so I’m banking on them growing even further in Week Two. North Carolina A&T will certainly give Duke’s defense a run, but based on Cutcliffe’s statements after last week, I’m looking for the Blue Devil secondary to make some major improvements.

This one is interesting—we have North Carolina A&T coming off a loss, soon-to-be playing only its second game in nearly 21 months. Then we have Duke, motivated to get its first win of the season after a heartbreaking loss to Charlotte. Durant might still be sore from the load he carried a week ago, so it figures that Holmberg might have his big night Friday. The Aggies have a solid running back in Martin, who could do some damage to Duke’s poor-tackling defense, but the local matchup shouldn’t be too much trouble for the Blue Devils in front of the home crowd. Duke all the way.

Above all, the outcome of Friday night’s matchup depends on the play of Duke’s defense. Durant won’t replicate his historic Week One performance, but both a comfortable Holmberg and improved receiving corps will pilot the Blue Devil offense to an easy win in the home opener as the defense yields little to Martin and the North Carolina A&T offense. It won’t take much more as this hungry Duke team gets its first win.

Holmberg proved himself in the first game—and Cutcliffe will get the defense together. Duke will bounce back and take down North Carolina A&T off the back of another heisman-like performance from Durant, and the defense will take Cutcliffe's message to heart and keep the Aggies to a manageable score.

Contrast in offenses the difference in Lawrence 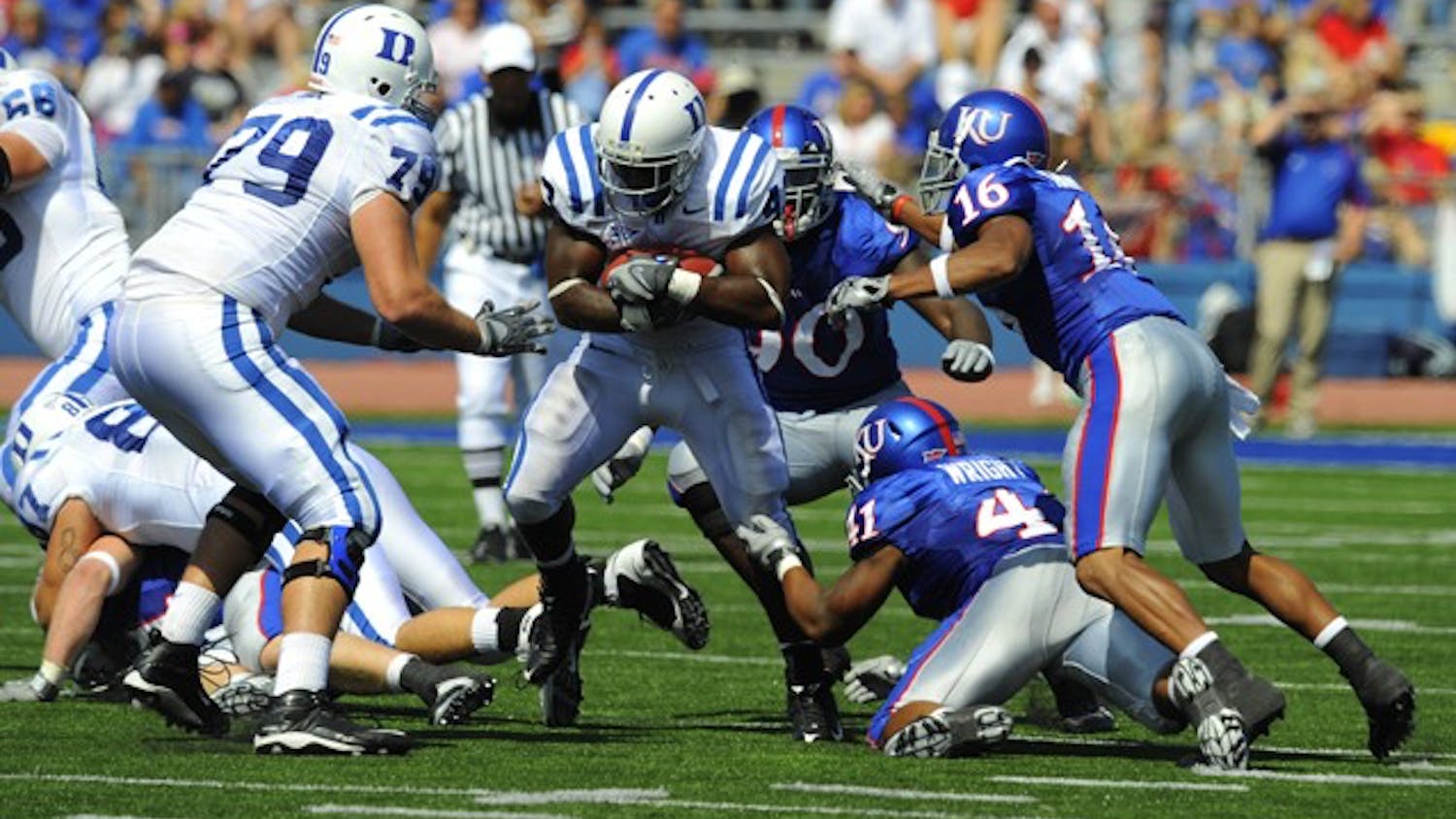 Max Rego is a Trinity junior and sports managing editor for The Chronicle's 117th volume.

Jake Piazza is a Trinity junior and sports editor of The Chronicle's 117th volume.

Micah Hurewitz is a Trinity sophomore and a sports managing editor of The Chronicle's 118th volume.

Bringing back the ‘palpable sense of Duke’: Meet Finn Brauer, the next DUU president