The trials of President Richard Brodhead

When Richard Brodhead called up his close friends at Yale to tell them that he would be taking the President’s job at Duke, they were shocked.

“People couldn’t believe it,” he said of his friends’ reactions. “I called my closest friend on the faculty. He just couldn’t get his head around it.”

He had made “a life’s worth of friends” in New Haven and had more than a few admirers.

“Everyone at Yale seems to love Richard Brodhead, and every person you encounter there is quick to tell you that,” The Chronicle reported when Brodhead took his job at Duke.

See our other Brodhead coverage:

Inside the life of Duke's first lady

It’s fair to say that Brodhead has not been loved by everyone while he has been at Duke. He has weathered a number of major storms, including the lacrosse case that loomed over his presidency. And Brodhead has also been drawn away during his tenure at Duke from what he has loved most in his career: teaching and scholarship.

But Brodhead insists that he doesn’t miss anything that he left in New Haven.

“I don’t miss a single thing about what I left behind,” he said. “I don’t. I loved my life when I was there and I’ll tell you, you know how long it took me to love being at Duke? About one day.”

And after 13 eventful years in Durham, Brodhead says that he doesn’t spend time thinking about regrets.

“I don’t see the profit in it. I’m telling you it’s factually true that I don’t. My job is always about looking forward,” he said. “I don’t feel that Duke turned out to have any deficiency that I couldn’t foresee, and every time I think about it I just feel regret. That’s just not true at all.”

Even if Brodhead doesn’t have regrets to dwell on, he certainly faced a variety of challenges during his tenure. Some of these he was well equipped to deal with, while others found him in uncharted territory.

Brodhead faced a hectic beginning to his presidency in 2004—which began just days after men’s basketball head coach Mike Krzyzewski famously received a tempting NBA offer. Then came an even higher pressure flashpoint under national scrutiny.

Later that year, Brodhead had to deflect controversy that hit the University when Students for Justice in Palestine held the annual conference of the Palestine Solidarity Movement on campus, triggering significant backlash. More than 82,000 people signed a petition asking the University to cancel the conference.

Brodhead didn’t step in to stop the conference, instead citing the principle of free speech in an academic setting. The president and his team also trusted that there was something to be gained from discussion about the controversy.

“We saw a controversial issue as a teachable moment for students,” said John Burness, senior vice president for public affairs and government at the time. “Would that have been something that a new president might have selected in his or her first year on the job to have? No, but that’s not what being the president is about.”

This was not the first time Brodhead had dealt with the issue of controversial speech on campus. In a 2002 speech that was later published as part of a book, Brodhead described several high profile incidents that he dealt with in the wake of 9/11 that touched on freedom of speech. His view—then and now—was that a university has no business stopping even distasteful or offensive expression.

“When universities get in the business of suppressing speech, however vile, it lends credence to the notion that it is a legitimate function of the university to suppress speech,” Brodhead said in his speech.

Free speech issues have occasionally arisen throughout his time as president, and the University under Brodhead has worked to allow organized forums with controversial expression to go forward.

"He was pretty consistent in his principles,” Burness said.

When controversial social scientist Charles Murray was invited to speak on campus earlier this year soon after his talk at Middlebury College was shut down by a protest that turned violent, Duke put in place an extensive security effort in order to allow Murray’s event to take place without disruption.

“If universities don’t stand up for the idea that nobody knows the whole truth yet and the only way we learn more of it is through exchange across lines of difference of opinion...who in the world is going to?” Brodhead said.

‘Every kind of terrible’

Nothing during Brodhead’s tenure has quite compared, however, to the tumult of the lacrosse case. The story of the scandal has been repeated time and again, and the impact of the events that followed from the 2006 party on Buchanan Boulevard have been analyzed a thousand different ways.

“I live in the present tense headed toward the future tense,” he said. “I don’t spend my time looking back on this.”

But others around Brodhead have suggested that the experience left a mark.

Brodhead’s wife noted that the case was different from anything else he had previously seen. Even after more than a decade as Dean of Yale College, responsible for the full breadth of undergraduate student experience at Yale, Brodhead had not had to deal with anything quite like lacrosse. Indeed, few parallels existed to the sequence of events that took place during the case.

“I thought when we came here that we’d seen every kind of terrible there was,” Brodhead’s wife Cindy said. “That turned out not to be true.”

Cindy Brodhead added that lacrosse was the hardest thing that Brodhead has gone through during his time at Duke.

“The whole lacrosse situation was terrible but you know, what doesn't kill you makes you stronger,” she said.

Burness explained that he believes Brodhead became less willing to engage publicly after the lacrosse scandal.

"I don't think he was as visible [after lacrosse]," Burness said.

Burness noted that the scandal was fueled by Duke’s initial willingness to have media organizations from across the country on campus as the events were unfolding, which may have impacted Brodhead’s thinking. The person who was known and beloved by all at Yale became somewhat more removed from the public eye.

Other administrators have also said that lacrosse made the University—and perhaps Brodhead as well—a little less willing to take chances in situations when Duke’s public image could be affected.

“I don’t think I’m in a great position to say whether [Brodhead] was gun-shy or not [after lacrosse], but I believe the institution is,” said Sue Wasiolek, associate vice president for student affairs and dean of students, in a 2015 interview with The Chronicle. “I know that I am. I know that I have a higher level of fear associated with just making decisions, and I have a much greater tendency to collaborate, to check in, to consult.…That’s how I would describe just the institution as a whole as a result of the lacrosse case.”

No crisis could quite compare to the tumult of lacrosse, but that doesn’t mean that everything was smooth sailing for Brodhead afterward. A combination of foresight, skill and luck ensured, however, that nothing else during Brodhead’s term quite blew up the way that the University’s signature scandal did.

The economic shock in 2008 roiled the University’s finances. Duke lost a quarter of its endowment—more than a billion dollars—in two months. But expanded financial aid, one of Brodhead’s signature achievements, was protected in part because Brodhead had begun a $300 million fundraising campaign to support aid soon after he came to campus.

"Had he not done that, things would have been really bad in 2008,” Burness said.

Later in Brodhead’s term, issues of campus climate and inclusion came to the forefront.

In 2015, Duke found itself in the crosshairs of controversial evangelical preacher Franklin Graham regarding a decision to broadcast the adhan—a Muslim call to prayer—from the top of the Chapel. After initially pushing forward with plans to hold the adhan, Duke later moved it to the chapel quad and then only held the adhan once.

“In my line of work, I’ve been at the helm in lots of very challenging situations," Brodhead said in an interview after the incident. "I don’t believe in bowing to forces of intolerance.”

Later incidents did not have a significant impact on Brodhead. When nine students occupied the Allen Building last year, Brodhead says that he did not regard the commotion surrounding the occupation as a major disruption to the University in the grand scheme of things.

“My university was shut down for six weeks by student activism when I was in grad school. [I do not accept] the notion that last spring was a time of high activism on campus,” he explained. “It was visible, but I did not regard the community as being convulsed by it.”

‘Some place no one prepared to be at’

Despite his years of experience dealing with administrative challenges, Brodhead is, above all, a teacher and an educator.

“I only ever went into academic life because I wanted to be a teacher,” he said. “That’s the deal. I spent my life in a state of total happiness as a teacher.”

Life as an administrator has slowly drawn him away from the world of teaching, but Brodhead still frames his job as that of an educator, and refers to what he enjoys most about the job in terms of education.

“No one understands how fun this job is because on any given day something can move from the edge of your consciousness to the center of it,” Brodhead said.

The same variety of experiences and daily learning that Brodhead loves so much about the job, however, has also presented him with unwelcome obstacles that have left their mark. And perhaps after 13 years as president, Brodhead may welcome a return to life as a scholar and educator.

“How many years has he given to the public life of this order? To Duke alone, going into 13. This is a lot. This is a real lot,” said Thomas Ferraro, Frances Hill Fox professor of english and a longtime friend of Brodhead’s. "It’s required him to not be a scholar every day, and so these are parts of you that you would want back, right?”

After a year on sabbatical—which Brodhead says he was initially due for in 1993 but hasn’t quite found the time to take—the president will find himself back as a professor. When his sabbatical is over, Brodhead said he plans to keep Duke as his “institutional home.”

Perhaps then he will have a chance to find in a new way the exploration and innovation that first drew him to Duke. 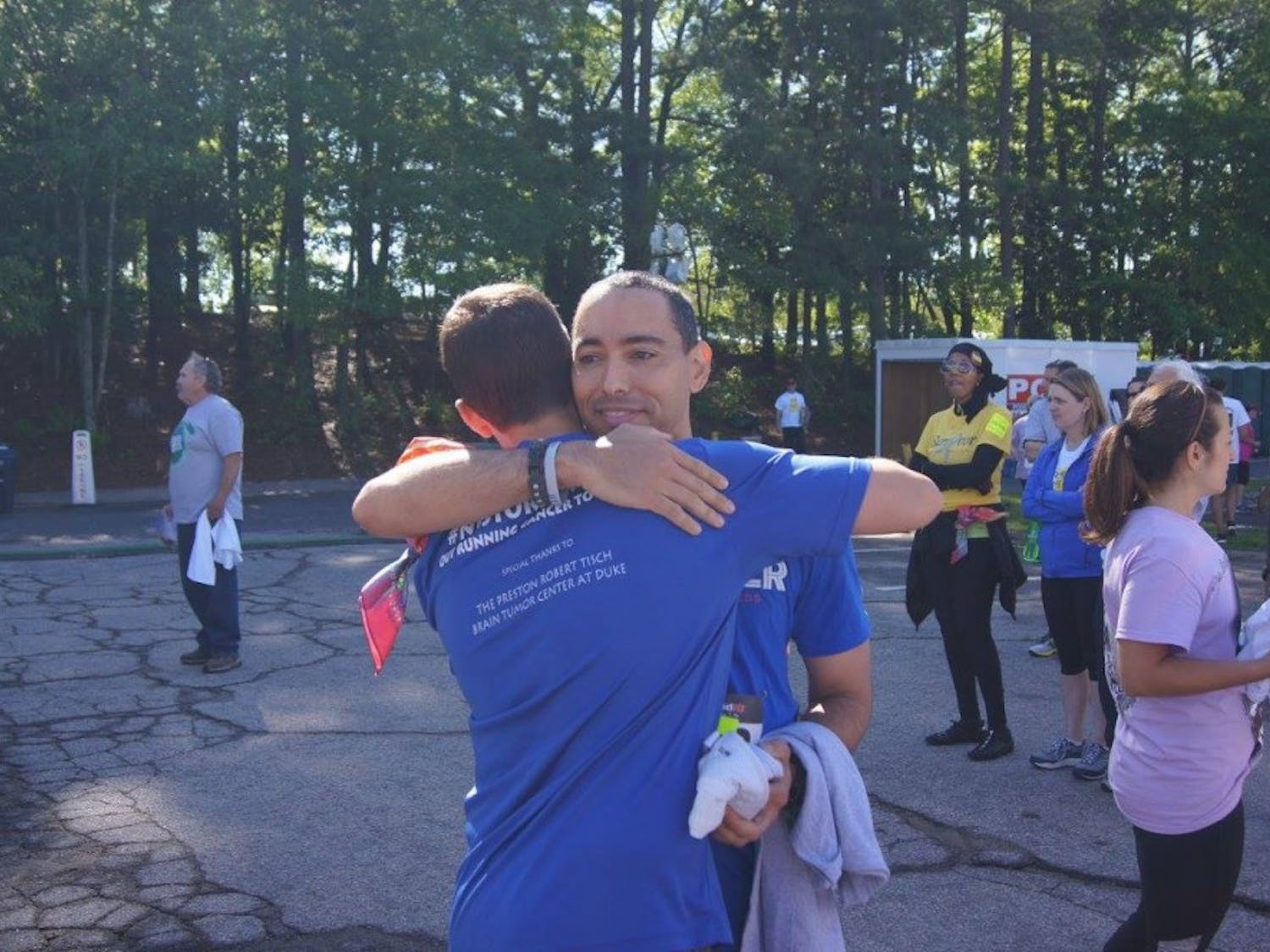