A Duke student expresses frustration with a lack of diversity in options for coffee on campus. In response, a peer creates a GoFundMe page to fund his annual “plantation vacation” to “fight exploitation of child labor in coffee plantations.” On his annual trip, he claims to find coffee beans that he uses to brew his own coffee. His recommendation to the distressed coffee-lover? Go to Colombia to find your own coffee beans. While you’re at it, help him fund his own trip. 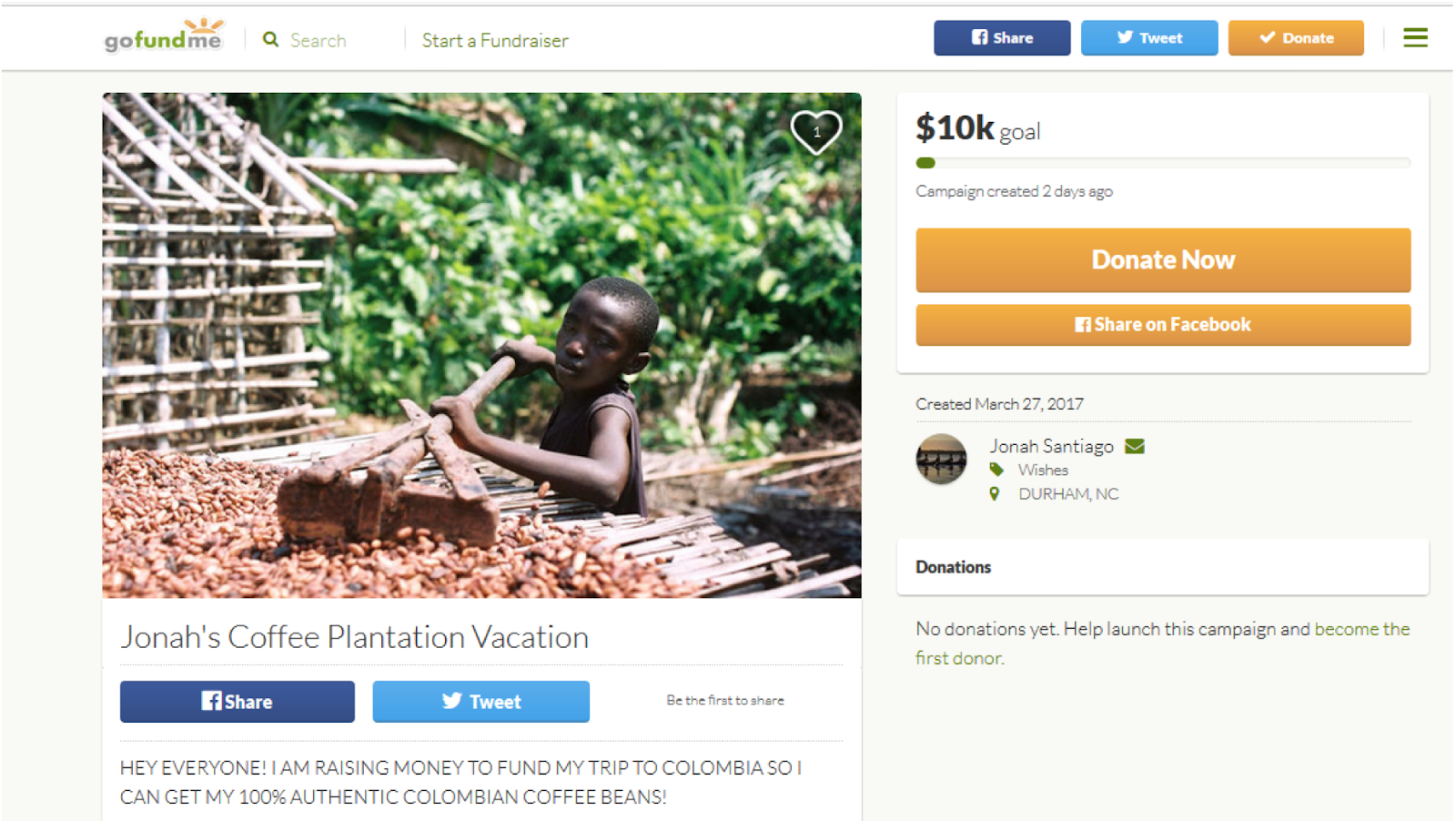 Another student explains how the printers in the Physics building create a loud distraction for people studying nearby. Again, the Dukie-on-a-mission to shut down “first-world” privilege, responds in the Facebook comments section of Fix My Campus. This time, he reacts by adding that the door to the Physics building similarly creates a disruptive noise. Therefore, we should get rid of the doors entirely.

Our man-on-a-mission does not seek affirmation for his satirical posts, though he is inspired to continue with every “like” his comments received. Blowing things out of proportion excites him. His prior experiences with artistic expression begin and end with his time in a high school Jazz Band. He views his comments as an expression of his creative liberties, though he has no interest in journalism nor writing.

Still, Jonah Santiago, a sophomore from Atlanta, finds a way to write incisive satire that both entices and provokes a wide audience. When asked if his studies as a biomedical engineering student explain his fascination with skillfully and artfully construing reality as he put it, he admitted “creative writing is a little bit like engineering.”

Upon the invitation of a friend, Jonah joined Fix My Campus, the Facebook page began by Duke Student Government. On it, students share concerns and suggestions of ways to “fix their campus.” The Facebook page connects students with a team of moderators who work hard to provide swift solutions.

Not enough paper copies of the New York Times in the library lobby? Fix My Campus can translate that concern to those responsible for maintaining the newspapers. Vending machine broken in the Link? Fix My Campus can…fix that. Noticed discrepancies in portion sizes at West Union? A Fix My Campus representative can relay those concerns directly to Dining Services.

In short, this Facebook group, with its nearly 5,000 members, makes for tangible improvements to campus life. It also makes for an opportunity to interject poignant remarks on a campus-wide forum.

For Jonah, frustration with Fix My Campus brews not from what it does, but for what it brings out in certain individuals—a pervasive entitlement that allows students to think it’s okay to share their first world problems on a platform intended for issues that concern the wider student body.

According to Jonah, posts about hardly-visible "Yield" signs and dangerous pavement tiles are important and appropriate for a campus-wide forum. Personal preferences, however, are not.

In the summer of 2016 when incoming freshmen wondered about the sorts of classes they should take if they were entering college on a pre-professional track, Jonah saw an opportunity to comically welcome them to the myth of “effortless perfection.” So, in response to a hopeful pre-medical student’s advice-seeking post on the Class of 2020 page, Jonah commented to suggest the incoming freshman start practicing surgery.

“There is nothing like having real world experience,” he quipped in his ostentatious comment. In his comment he claimed to have completed 100 surgeries in his freshman year alone, under the mentorship of a renowned radiologist at Duke Hospital.

Duke administrators were not pleased by Jonah's very first facetious post on a Duke Facebook page—to say the very least. Duke Reach, a systems-based outreach and support service housed in the Dean of Students Office, checked in with him after reports were made questioning his mental stability.

While parents and students, alarmed and distraught by the notion of a freshman performing 100 surgeries, raised concerns to administrators, Jonah was studying diligently in Russia as part of his summer study-abroad program.

What was intended as a joke about the over-ambitious nature of Duke students quickly turned into a fiasco when Jonah’s professor, who had been notified by staff back in the U.S., contacted him directly about the post.

Jonah admits that his comments threatened the “integrity of Duke’s online image,” which now has administrators patrolling pages such as the Duke Class of 2020 page. Now he is a registered “troll” in the Duke database he claims exists. One of his deans had reached out because moderators did not know who he was, he claims. Now, he’s in “the system.”

It is important to recognize Jonah’s genuine intentions; whenever a student does reach out in response to his satirical posts, specifically the freshmen curious about his alleged medical experiences, he connects them to resources and offers helpful advice about clubs to join.

Jonah’s first post, the one that taught him how “people are super gullible and believe what they see on Facebook,” also offered a lesson on humor. “I make sure I’m not offensive and not singling any student out.”

Nowadays, Jonah’s posts are explicitly over-the-top to make clear his satirical intentions. The description for his Colombian “plantation vacation” GoFundMe page sought to achieve this. Nonetheless, one of Jonah’s own friends failed to recognize the post as satire.

Beyond the faculty and staff reaching out in regards to the satire, Jonah’s work has been met with resistance from his own peers. While sometimes the original post author will appreciate his satirical comment, other times they will feel “kind of offended.” They will respond with a “way to make a mockery out of my misfortune;” still, for the most part, “most people enjoy it…. Those are the ones who find the humor in it.”

Jonah believes that “satire, when done correctly, makes [people] challenge reality and consider the scope of human ability.” In this way, his writing is not that far off from art forms with the same potential. At the same time, he is happy continuing to post for the enjoyment of others. The happiness of others inspires him, and he admits to “kind of feeling like an entertainer.”

As much as Jonah dislikes “small first-world problems,” and posts satirical entries about mission trips, he can admit that he is beyond innocent. If you see Jonah around on campus, ask him about his summer plans. He will gladly share details of his upcoming DukeEngage trip to Zhuhai, China. For a man critical of unsustainable service missions and students who are really “going [on DukeEngage trips] for the sake of tourism,” Jonah has a lot of cognitive dissonances he continues to confront. “I guess I’m part of the problem,” he reflected when asked about it.

In China, Jonah will work with a young demographic he has worked with before as a volunteer at a summer camp in Georgia; there he taught coding and engineering to middle schoolers. Although he is critical of the “hypocrisy and façade of volunteer work"--the kind of façade that inspired him to create the fake GoFundMe for his “plantation vacation”--Jonah has a moral compass that relieves his own conscience.

The title of Jonah’s summer DukeEngage program is “enriching the lives of children through arts education.” Before he leaves for his summer service trip, find Jonah—Duke’s very own social justice troll—in the comments section of Fix My Campus. There, he will be enriching the lives of Duke students who can appreciate the humor and ironies of our privileged concerns.

Sabriyya Pate is a Trinity sophomore. Her column, “in formation,” runs on alternate Mondays.

Sabriyya Pate is a Trinity junior. Her column runs on alternate Mondays.