Since the 1930s, athletics have shaped Duke's image

As Duke President Richard Brodhead navigates his final semester, The Chronicle will be examining his impact on athletics with a series of articles, continuing with one about how athletics impacts the University’s image. Check back in the coming weeks for a final story about sports at Duke Kunshan University, and read about Brodhead’s bond with men’s basketball head coach Mike Krzyzewski here, his role in hiring football head coach David Cutcliffe here and his decision to hire Kevin White, vice president and director of athletics, here.

Although there are player safety concerns in modern college football, the enormous revenues make it unlikely that schools will currently consider getting rid of the sport.

But more than 100 years ago, that is exactly what happened at Duke.

After the University—then known as Trinity College—played the first football game in North Carolina in 1888 against its Tobacco Road rival, it stopped playing football from 1895 to 1920 after players around the country were severely injured and even killed.

Eventually, President William Preston Few oversaw the transition from Trinity College to Duke University, and one of his many transformative decisions was to reinstate football and begin a long tradition of using athletics as an advertising tool.

“President Few understood the work of your philosophy professors may have a very enduring mark on the world, but the quickest way to get noticed is through athletics,” Brodhead said.

As the University’s student and faculty numbers skyrocketed, Few prioritized two areas—football and medicine—to quickly put Duke on the map.

Brodhead discussed those decisions in a 2015 faculty address. The University famously hired former Alabama head coach Wallace Wade, the namesake of Duke’s football stadium, to coach its football team starting in 1931. Seven seasons later, the Blue Devils made a Rose Bowl appearance after the “Iron Dukes” held opponents scoreless throughout the regular season.

During the same time period, the Duke School of Medicine became one of the better medical schools in the nation less than a decade after its inception in 1930.

“I just find it incredibly interesting. Stand on the front door of the Allen Building, and you’ve got Duke Medicine 100 paces to the right and Duke Athletics 100 paces to the left,” Brodhead said. “I love the fact that from the new football stadium, you can see back through the whole campus. You can appreciate how sports is part of the University…. None of us would be here if it weren’t for the interlacing of the many choices that were made on different fronts.”

Since the 1930s, several other choices have been made to keep Duke among the nation’s top institutions for both athletically- and academically-inclined students.

‘Very few places could claim that’

When publications or other organizations rank the best colleges in the nation in terms of academics and athletics, Duke is mentioned with Stanford as the top two destinations for prospective students. The organization Niche actually ranked the Blue Devils ahead of the Cardinal for their 2017 rankings, though Stanford is normally thought of as the gold standard for having “the best of both worlds” with its 112 NCAA championships.

Although Duke is going through one of its worst two-year periods athletically in recent memory—the men’s basketball team’s recent ACC championship was the school’s first in any sport since 2014 and the University has not won a national championship since 2015—Duke’s reputation has not seemed to take a hit.

“Athletics are part of the fabric of this university. We have shown that we can go to the highest level academically while we still continue to go to the highest level athletically. That’s a combination [Brodhead] has put his arms around and hugged and made better,” Krzyzewski said. “Athletics is the window that a lot of people see this University from. Once they look into the window or walk through the door, they find truly one of the great, great institutions of learning in the world. As long as we keep that combination of athletics and academics strong, Duke will continue to grow.”

Another major decision that has forged the University’s identity was the choice to hire an unheralded Krzyzewski from Army in 1980, then stay committed to him when his teams went 38-47 in his first three years.

Since that time, the five-time national champion has become a global basketball icon, and his decisions working with Brodhead and other administrators as college basketball has seen a rise in one-and-done players and transfers have only made the Blue Devils’ brand stronger.

“I think it’s the best school in the world,” Krzyzewski said. “I’m glad to be on the team that’s helped get it there.”

Even though Duke has had five players transfer and eight one-and-done players since 2011, its reputation for having veteran players who were also accomplished in the classroom was forged decades earlier.

“There’s no doubt that athletics has a huge impact on Duke’s visibility, and most of that relates to basketball. For the longest period of time, Coach K wouldn’t put up the Final Four banner until every kid in the class had graduated,” said John Burness, former senior vice president for public affairs and  government affairs.

“I remember when I first came, I was contacted by a reporter…. He was totally taken by this idea that Duke would not put up banners until everybody had graduated. The sense that was out there was that Duke did athletics and academics at a high level, although clearly it was basketball that was driving that image on the athletics side. There’s no doubt that Duke’s brand was excellence in athletics and academics combined. Very few places could claim that.”

Although football was the first sport many people saw when they thought of Duke earlier in the 20th century, the Blue Devils became one of the nation’s worst football programs in the early 2000s. As Duke rose to or stayed at the top in a slew of sports, including men's basketball, men's lacrosse and women's golf, its football team went winless three times from 2000 to 2007.

So one person who has a keen appreciation for how athletics can impact a university’s image is Cutcliffe, who has coached SEC football and already led the Blue Devils to an ACC championship game and bowl victory in his first decade at the helm.

“We are able to be somewhat of the curb appeal to a lot of people. For years, Duke basketball, with the national attention that it’s had and deserved has given people a unique look at Duke. If I’m an extremely high-quality student and I’m looking for the best education in the world, the appeal, the change or the difference in the decision a young person might make might very well be based on the curb appeal,” Cutcliffe said. “It may be based upon Duke Athletics, so we’re a unique blend.”

“There are two or three, maybe two, institutions at this level of athletics and academics. I think we prove daily that we’re on the same mission, that we’re about discipline, growth, learning and mentoring young, exceptional people, and that there is a place for extremely high-end athletics to live in the world of the best academic process.” 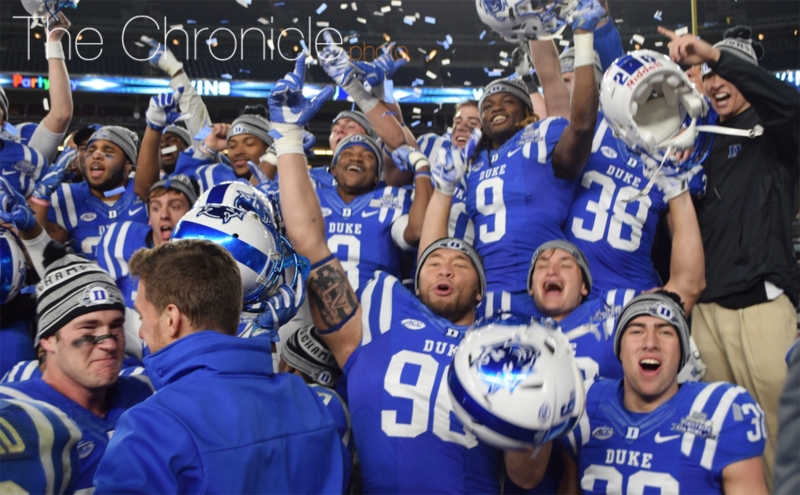 Brodhead’s tenure has also seen a new leader of Duke Athletics in White arrive. The vice president and director of athletics acknowledged that sports impact a university’s brand, but also noted how much that process has changed in the world of lucrative television deals and social media.

Duke men’s basketball’s social media presence is often lauded as one of the best in college athletics, with the team’s Twitter account boasting more than 1,200,000 followers. That number is greater than twice the followers for other blue-bloods like North Carolina, Kentucky and Kansas, and the University’s coaches have also noted how much recruiting has changed as a result of social media.

“With technology, there are a lot more engaging opportunities relative to athletics, access points if you will. It would have to have the potential of a larger impact on the brand of a place like Duke University, which isn’t just a domestic school, it’s a global institution,” White said. “Athletics does have the ability to enhance the image and the reputation. There’s an innumerable number of opportunities for that to happen…. Athletics does play a role, and the role has changed because of technology.”

The relationship Duke’s students have with athletics has also changed along with the University’s demographics.

A recent year of admissions saw Duke’s first class ever with more students saying the one thing that attracted them to the University most was DukeEngage rather than Duke men’s basketball.

Many claim a more academically-inclined student body is one of the reasons undergraduate student attendance has dipped in the past decade. Others wonder if the current attention given to athletics—men’s basketball in particular—is excessive given the University’s other strengths.

That begs the question—are sports too big a part of the University’s image and identity?

Despite his extensive background as a student, professor and dean at Yale, Brodhead said he has not worried too much about the impact athletics has on Duke and whether it might be excessive. Instead, he focused on the benefits for students and the community as a whole.

“Before I came, I wondered if I would worry about it. But the truth is it’s very rare to meet someone at Duke who is a sports nut without being a something-else nut too. It’s an additive,” Brodhead said. “It’s not as if there’s a zero sum and every part of you that cares about sports is subtracting from something else. That’s just not the way it works. It’s an enhancer. It’s an inspiritor, if you could use that word.” 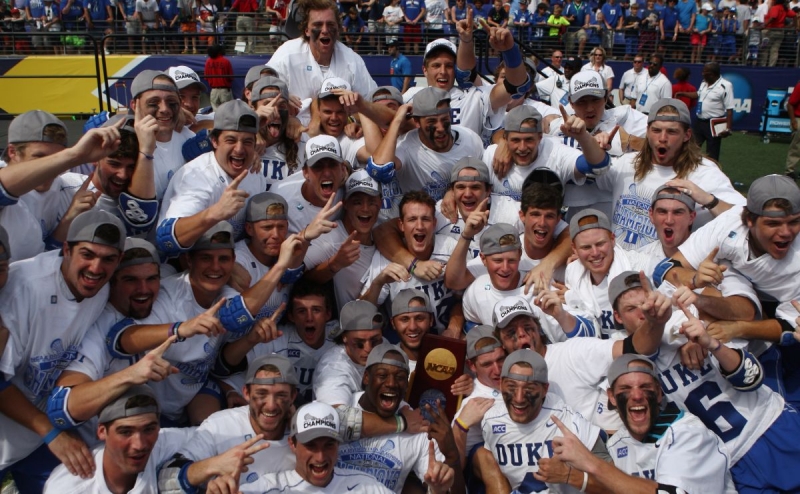 As revenues for football and basketball have gone through the roof nationally with television contracts, conference realignment and arms races regarding everything from facilities to nutrition—starting a vigorous pay-for-play debate—most Power-5 conference schools have had to grapple with the same dilemmas.

“It’s out of control. The emphasis, the money, the amount of money coaches get paid, the facilities escalation—it’s not good,” former provost Peter Lange said. “One has concerns about getting the right mix between athletics and academics all the time. That’s true at any institution, and it’s certainly going to be true at Duke, where we so value academics. On the other hand, as provost, that concern never became an alarm bell for me.”

Lange said that the emphasis placed on academics by Blue Devil coaches and their work with the admissions office to select players keeps the University balanced as it walks the fine line between seeking academic supremacy and maintaining its status as an athletic powerhouse.

And because of the decisions that have been made for more than a century, Duke’s reputation has endured, with the school not missing a beat even with the infamous lacrosse case in 2006 and other obstacles since then.

“Nowadays, I think the multiple of Duke’s strengths are pretty well known through the world. It’s a pretty rare place where the only thing you know about Duke is athletics,” Brodhead said. “There are countries that actually don’t care much about athletics, and Duke is still well-known in those places too.”