Worth a shot: Scenes from the end of the walk-up line

There was a birthday party in the walk-up line.

Somewhere right in the middle, under a pair of flags flanked by a beer pong table, David Soled threw a party. It didn’t matter that it was raining. He and his friends had to stay in Krzyzewskiville’s auxiliary wing for the night, but that didn’t mean they weren’t going to celebrate. And so, for a few hours, K-Ville had a taste of Shooters.

The partygoers are just a handful of the nearly 600 residents of this year’s Duke-Carolina walk-up line. Restricted by rules on tents, standing structures and non-folding furniture—all are strictly prohibited—these pairs of Crazies battle the elements at a higher intensity than their tenting brethren, albeit for a shorter time.

Wind, rain or shine, at least one member of the duos must be present, lest they fall victim to a dreaded line check. The line officially opened at noon Monday, but that didn’t stop the more eager aspirants from lining up early. Groups later on whisper that one of the first groups in line skipped the Super Bowl to ensure their place at the front. The gossip is mostly true—they streamed it on a laptop.

At one point, a battle emerges between competing stereos to see who can blast music the loudest. The result is a clash of sounds so violent, it makes a Jackson Pollack look organized. Never the same genre, and at seemingly increasing decibels, students trapped in the acoustic crossfire have no choice but to sit and accept their fates. 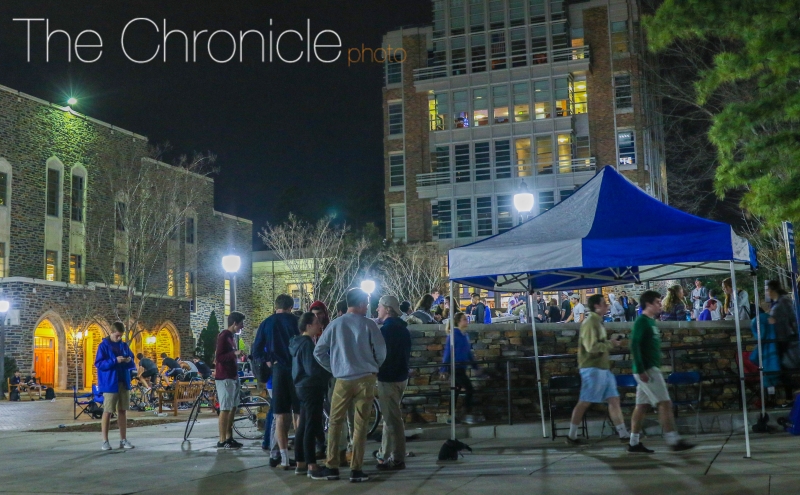 The walk-up line is a test of will, and confidence. By Wednesday afternoon, the groups will be set. Each line survivor will receive a wristband, but admittance isn’t guaranteed. After 48 hours in the elements, there’s still a chance of being turned away at the door. Because of the uncertainty, groups at the end of the line nervously ponder whether or not they’ll be let in. Cautious sighs are released whenever an early group misses a check, and is relegated to the end of the line.

By 6 p.m. Tuesday, at least 291 groups signed up. Co-Head Line Monitor Steve Brenner said he wasn’t comfortable giving an exact number, because he “didn’t want people doing the math in their heads.” But as you might expect, nearly every person I spoke to said they’d done the calculations already.

Although the Line Monitors won’t guarantee anyone’s admission, they say they’ll try to fit as many people inside as they can. The sentiment is comforting to some, but the night is wrought with tension for those at the end of the line.

Will they get in?

She and her friends tried landing a black tent, but scored too poorly in trivia. Then, when white tenting rolled around, they finished the race to the secret spot just after the cutoff.

A senior, Nur knows this is her last shot to see the Blue Devils take on their fiercest rivals. She didn’t tent sophomore year while keeping up with a demanding pre-med schedule. Last year was impossible because of the MCAT. But this year, she’s here, wrapped in her Pennsylvania high school sports hoodie, tucked inside her sleeping bag.

She lined up a little later in the day, and was assigned group 273. That number has her a little worried.

“I’m trying to be optimistic,” Cardakli said, “But I have no idea. If you look at the numbers, it’s just below Cameron’s capacity.” 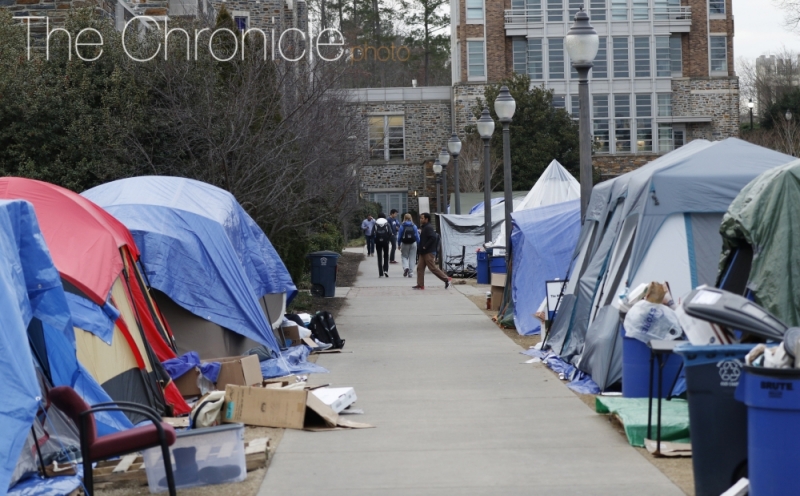 Over the past few days, Cardakli has taken the bulk of her pair’s shifts. Although the weather Monday night was clear, she still said she was cold, and enlisted her brother Emre, a freshman, to bring her supplies. The first night, he bought hummus. The next, some Indian food.

Despite the rocky road to game day, Cardakli said she still thinks there’s a good shot she’ll be watching the game courtside.

“I have my fingers crossed.”

Trapped in the cold, and stuck at the end of the line, the proud member of group 291 called a lifeline—her dad—and oh, did he deliver. The Durham native had been alone in line for hours. Thankfully, her loving father brought her something better than company.

While her peers shuffled through boxes of Bud Light and PBR, Johnson was content doing her homework, sipping on her premium brew.

This is her second attempt at seeing the Carolina game in person. Johnson was a black tenter her freshman year, but because she took a year away from school, she had trouble building a group willing to combat the Durham winter for more than a few days. And so she finds herself here, at the end of the walk-up line. 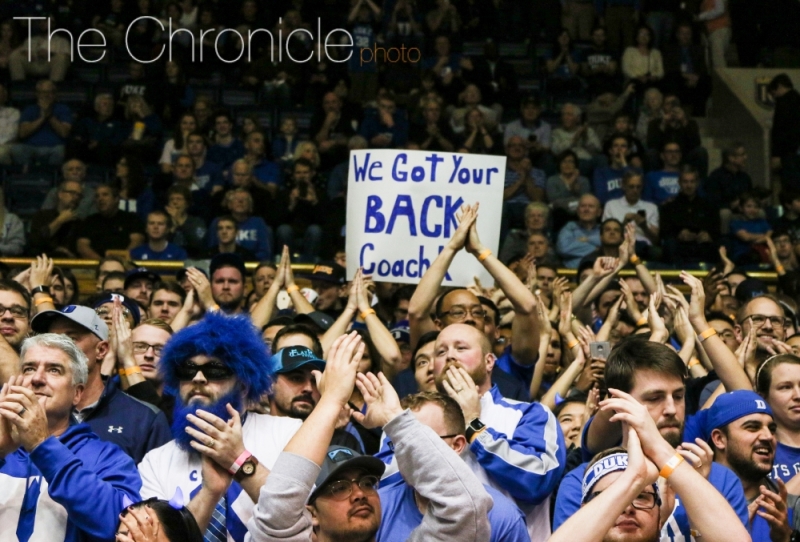 Although the obvious strain of not knowing whether or not she’ll be able to see the game in person is stressful, she isn’t overly worried.

“I feel pretty good,” Johnson said. “A lot of people probably join when it starts, and a lot of people join the last day because it’s less of an investment.”

She’s right, for the most part. A few groups registered after she did at 2 p.m. on Tuesday. Their chances of getting in are smaller than hers. Still, with Johnson’s attitude, they’ll be fine either way.

“If you don’t get in, you’ve just been drinking all day, and you go watch somewhere else,” Johnson said. “It’s the most fun pregame.”

On a short break from the walk-up line, she ordered some food. Normally, she’d go back to her favorites—chicken noodle soup, and a thai peanut chicken wrap from Au Bon Pain. But this time, she decided to mix it up. She ordered Japanese food.

As she returned to K-Ville, she realized she was missing soy sauce. Frantic, she asked another vendor, Panda Express, if she could have some. To her dismay, the staffer at the register told her she had to buy something first. When she offered to buy something small to receive her sweet nectar, she was rebuffed.

Faced with the thought of a dry, soy-sauceless lunch, our hero did what any brave Crazie would do—she marched to the Bryan Center, and purchased a full bottle of La Choy soy sauce. She would go hungry no longer.

Herrera is no stranger to the walk-up line. She joined last year, and saw her first Duke-Carolina game. This year, she planned on white tenting, and was determined to find the secret spot. She and a friend solved the riddle, and dispatched teammates to the softball field to claim their tent. Alas, the garrison arrived too late, and Herrera was relegated to a spot in the walk-up line. 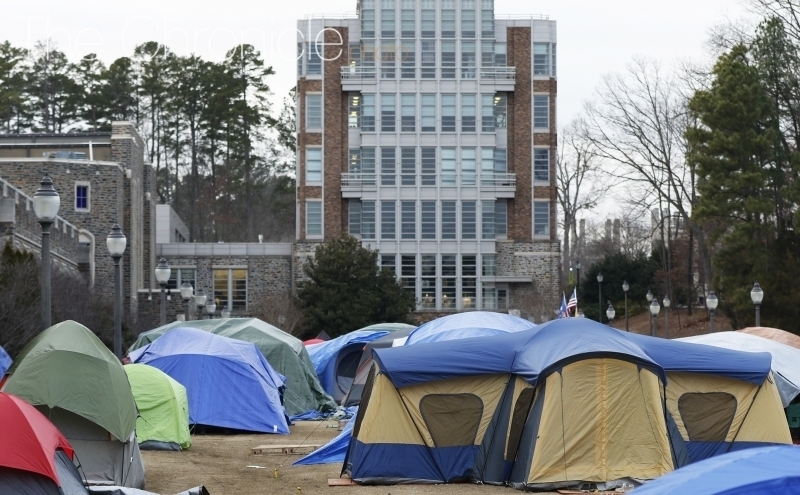 At spot 246, Herrera knows getting in might be tricky. There are 10 extra tents this year—that’s 120 more people—and space in Cameron is limited. Still, she has faith in the line monitors.

“I feel like last year they did a really good job,” Herrera said. “I think they got everyone in.”

If the worst happens, and Herrera is on the outside looking in, she said she plans on going to a watch party with her friends on West Campus. Either way, she said the walk-up line experience wasn’t that bad.

“They only did two checks last night, so I got to sleep!”

Joe Timko wasn’t nervous about getting into the game until around 1 p.m. Monday.

As a senior, he’d managed the perils of the walk-up line before, and knew he should arrive before the official start time to save his place in line. At about 11 a.m., he and his partner were given the 232nd spot in line—not great, but still close enough to the front to find some space inside.

After two hours near the woods, disaster struck. His partner, freshman Harrison Geller, desperately needed to make a bathroom run. It was risky, but he knew the consequences. He had to go.

Right as he left, the watchers of the Ville sounded their alarm. A line check.

Timko and Geller were kicked out—pushed all the way back to 259. Their relative comfort no more.

Lucky for Timko, he has a backup plan if he doesn’t get in. His dad is visiting from New Jersey, and the duo has plans to watch from a local bar. Still, Timko said his time in K-Ville hasn’t been that bad. Unlike the last time he joined the line, the weather has been pretty nice. That, he said, contributed to a relaxed atmosphere among the crowd.

Despite his transgression, Geller still thinks he and Timko will be watching from inside Cameron.

“If it happens, it happens,” Geller said, “But I think we’ll be fine. Things always work out.”

As night began to fall on Tuesday, it seemed like Geller’s hopes were coming true. The music was still blaring, people were still dancing and the birthday party was still in full force. The stress from the uncertainty seemed to melt away.

And then it started to rain.

Share and discuss “Worth a shot: Scenes from the end of the walk-up line ” on social media.