The next chapter: Duke men's basketball aims for signature win in first 2017 matchup against North Carolina

As Duke head coach Mike Krzyzewski strolled onto the court in his return to the sidelines following back surgery, the Blue Devil crowd did not hesitate to shower the legend with adulation.

But even the roar Krzyzewski received Saturday against Pittsburgh may not compare to the decibel level inside Cameron Indoor Stadium later this week.

No. 18 Duke and No. 8 North Carolina will renew the Tobacco Road Rivalry when they square off for the first time this season Thursday at 8 p.m. The Blue Devils come into the contest riding a three-game winning streak and will look to close the gap on a Tar Heel team that has won nine of its last 10 and sits atop the ACC standings, 2.5 games ahead of its rival.

However, Krzyzewski's return means Duke finally has all its rotation players and coaches active at the same time as it searches for a signature win.

“He brings a sense of urgency and a verve to our team that makes us better,” Blue Devil graduate student Amile Jefferson said after Saturday's game. “He’s amazing as a coach, as a leader, as a bringer of emotion and toughness, and when we get on his bus and follow the energy and the verve that he has, we’ll be a really good team.”

After battling injuries early in the season and playing without Krzyzewski for the last month, Duke (18-5, 6-4 in the ACC) has slowly righted the ship despite dropping three of four in the middle of January. During their winning streak, the Blue Devils have made key defensive stops when needed down the stretch and held their opponents to just 27.3 percent shooting from beyond the arc.

Although co-captains Matt Jones and Amile Jefferson have played at less than 100 percent recently, Duke has continued to grow more cohesive as a group and will need all hands on deck to slow down the best rebounding team in the nation.

The Blue Devils will have their hands full with a North Carolina team that knows a thing or two about continuity. The veteran Tar Heel quartet of guard Joel Berry II, swingman Justin Jackson and big men Isaiah Hicks and Kennedy Meeks accounts for nearly 70 percent of North Carolina’s scoring, with Jackson leading the way at 18.6 points per contest.

All four were on the court a year ago when the Tar Heels (21-4, 9-2) clinched the ACC regular-season title at Cameron after having the memory of Duke’s 92-90 overtime victory in 2015 etched into their minds.

“All the guys that they’ve got, we tried to recruit also,” North Carolina head coach Roy Williams said during Monday’s ACC teleconference. “The kids we’ve gotten are good players. We haven’t been able to get the top-5, top-10, top-20 recruit, but they’re very good players and when they do stay around they get more experience and learn things.”

As was the case last year, this season’s rendition of the Tobacco Road rivalry will offer a contrast between the more perimeter-oriented Blue Devils and the low-post heavy Tar Heels. The ability of one team to adjust to the other’s strengths could be the difference Thursday night.

To battle Meeks and Hicks down low, Duke may be forced to go away from its small lineup in which freshman Jayson Tatum plays at the four spot. North Carolina pummeled the Blue Devils on the glass last season by an astounding 64-29 margin, and is capable of doing so once again with the three-headed monster of Hicks, Meeks and rookie Tony Bradley patrolling the paint.

Although Tatum will have an advantage with his quickness on offense, the Blue Devils may be forced to rely on freshmen Harry Giles or Marques Bolden for minutes if Tatum struggles to rebound or picks up early fouls against an intimidating Tar Heel frontline. Despite showing flashes of the rebounding and scoring ability that made him a highly-touted recruit, Giles has been unable to crack the rotation consistently due to his struggles on defense.

“It’s my first Duke-Carolina game. It’s something you always dream of as a kid,” Giles said. “You grow up watching, especially being from in-state, so seeing it and just being able to play in it is going to be an honor.” 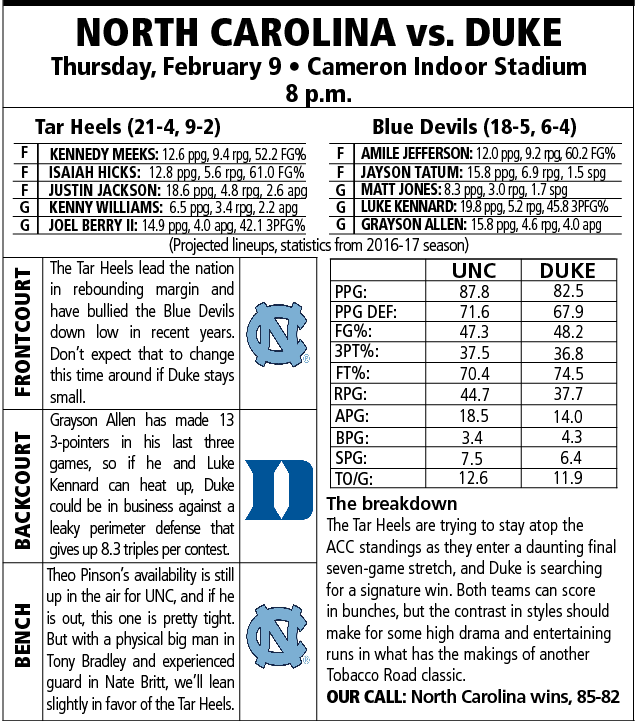 On the perimeter, the Blue Devils seem to have an advantage with the duo of Grayson Allen and Luke Kennard capable of putting up points when needed. Allen has played especially well during Duke’s recent streak, as he has found his perimeter stroke and averaged 20.3 points per game.

Despite having their own dynamic duo of Berry and Jackson, the Tar Heels have few other consistent perimeter options to match Jones and Blue Devil freshman Frank Jackson. However, with Duke likely emphasizing protecting the paint, contributions from North Carolina reserves Nate Britt, Luke Maye or junior Theo Pinson—who has been battling injuries all season but may return to the court Thursday—could give the Tar Heels a big boost by maintaining floor spacing on the road.

Although the Blue Devils have won seven of the last 10 meetings between the teams, three of the last four have been decided by fewer than five points. And as is usually the case when the teams meet, regular-season records and conference implications will likely become mere footnotes when the rivalry's chapter gets underway.

“The media’s going to do what they do because it’s an amazing game,” Jefferson said. “It’s probably the biggest rivalry in sports, so to be a part of that game is great and we’re going to go out there and try to get the win.”

One word for Duke men's basketball against Louisville: Energy

Share and discuss “The next chapter: Duke men's basketball aims for signature win in first 2017 matchup against North Carolina” on social media.

Athletics projects $36M in lost revenue due to COVID-19, details positive tests among students and staff.

From canvassing to farming, students reflect on fall gap semesters