Kevin White: Duke's athletic architect and master of the text

As Duke President Richard Brodhead navigates his final semester, The Chronicle will be examining his impact on athletics with a series of articles, continuing with one about Brodhead’s relationship with Kevin White, vice president and director of athletics, and the transformation of Duke’s athletic facilities. Check back in the coming days for stories about how athletics shape the University’s image, and read about Brodhead’s bond with men’s basketball head coach Mike Krzyzewski here and his role in hiring football head coach David Cutcliffe here.

Kevin White has several notable accomplishments to his name.

The former leader of Notre Dame’s athletic department has been among the nation’s most powerful athletic directors for several years, leading Duke’s recent transformation of its athletic facilities and helping the ACC secure a lucrative television deal with ESPN. He also serves on the U.S. Olympic Committee board of directors and men’s basketball NCAA tournament selection committee.

But President Richard Brodhead can also identify White with a title many teenagers often strive for—the master of the text.

“I communicate with my colleagues in many different ways. Kevin is the master of the text,” Brodhead said. “If I can say one thing that might be embarrassing to Kevin, Kevin does not obey the law that texts should be short. He’s an amazing person—what a gift to this university.”

Although Brodhead’s role in hiring Cutcliffe in December 2007 was instrumental, his ability to land White to be Cutcliffe’s boss less than six months later was probably more important to the trajectory of the Blue Devils’ athletic program.

A man who had been named the third-most powerful person in college football by Sports Illustrated in 2003 was convinced to oversee arguably the nation’s worst Division I team and help Duke’s 26 varsity teams put the recently-resolved lacrosse case in the rearview mirror.

So how did Brodhead get White to come to Durham?

From strangers to colleagues

After the lacrosse case concluded in April 2007 and former director of athletics Joe Alleva left to take the same position at Louisiana State, Brodhead and Duke’s senior administrators knew they had to move quickly to find a replacement.

Although there had been reports that White had been unhappily forced to take the blame for the controversial firing of Notre Dame football head coach Tyrone Willingham, the Fighting Irish football program—which, like Duke men’s basketball, is one of the most recognizable in all of college sports—had recently made the BCS Fiesta Bowl in 2006.

Brodhead's challenge was making the open job attractive to White.

“Hiring Kevin White was one of the red-letter days of my life. He was the AD of Notre Dame. He was never going to be standing on his knees as a candidate for another job,” Brodhead said. “There was a narrow window. There was a slight chance that you could get the person agreed by every single person I spoke to at any university to be the best AD in the country. That was an interesting period.”

Things started to move quickly in May and early June 2007, with former trustee Roy Bostock, Trinity ‘62, helping to arrange a meeting in New York between Brodhead and White.

The meeting took place at an office building for the Partnership for a Drug-Free America, of which Bostock—who played baseball and football during his time at Duke and has made significant contributions to Blue Devil athletics—served as chairman.

“That’s funny because I reflect on that moment every now and then,” White said. “We had arranged for me to meet Richard Riddell, [vice president and university secretary], at a hotel lobby. He walked me to this location where we were to meet President Brodhead and Roy Bostock. I remember looking at the heading of the building as I arrived, and it was entitled the Partnership for a Drug-Free America. I was actually wondering if I wasn’t heading toward an intervention or something—‘Where are we going, and why are we going into this location?’”

Brodhead and White reached the door of the room they were going into at the same time. The only obstacle preventing a warm introduction was that neither knew who the other man was, a sign of how unfamiliar both parties were to one another.

But once in the meeting, the two men talked for about four hours—time well-spent by some of Duke’s most prominent leaders.

“It was a long flight back to South Bend deciphering whether I should accept the very kind and generous overture to come to Duke University. By the time I arrived in South Bend, the calculus was behind me,” White said. “I had totally felt enamored by not only Dick, Roy and Richard, but the prospect of coming to one of the great universities in the world. This has been a wonderful experience for not only me but our family.” 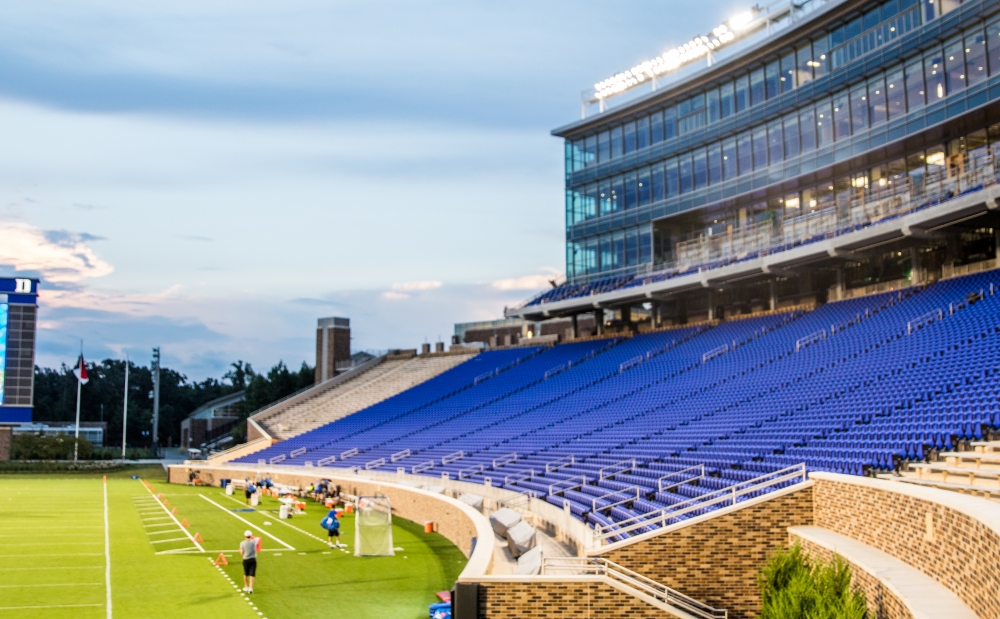 ‘Facilities for the next 100 years’

Since being hired, White has worked closely with Brodhead and Duke’s top officials to change the University’s athletic facilities. Much of that progress has come in the past few years with Duke Forward, the University’s fundraising campaign that has raised more than $3.25 billion, picking up steam.

One of the main symbols of Duke football’s past failures was the track that surrounded the Wallace Wade Stadium field, but the University constructed the new Morris Williams Track and Field complex in January 2015 along with Kennedy Tower, a four-story tower that supports the track facility and Koskinen Stadium. The Blue Devils’ soccer and lacrosse teams compete at Koskinen.

“Look what Kevin has done. The point of the construction is not the construction,” Brodhead said. “At the same time, if you hadn’t done something to Wallace Wade, you’re doomed to be a crummy program until the last judgement. So there were physical investments, and they would enable us to realize the deeper potentials of athletics."

"One thing that gives me enormous satisfaction is Duke used to have fantastic programs whose facilities were very run-down and in some cases, below mediocre. You can’t expect to recruit really good student-athletes to a football program when your stadium is less good than many high school stadiums.”

In addition to focusing on individual facilities construction and renovations—such as the recent upgrades to Cameron Indoor Stadium, Blue Devil Tower that oversees Wallace Wade and Scott Family Athletics Performance Center—White’s main goal was to connect Duke’s facilities with a plaza that fans could easily use to access ticketing, apparel and gameday venues. 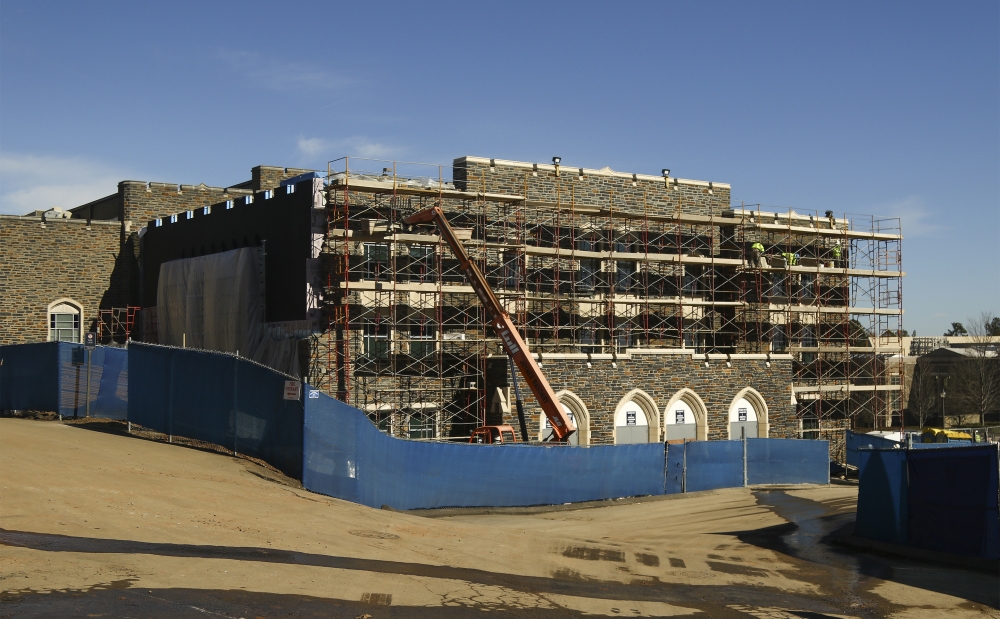 That vision recently became a reality last fall with the Scott building and adjoining pavilion completed, bringing to an end an intense period of renovations that started with the completion of new grass and turf fields between Cameron Boulevard and Wallace Wade Stadium in 2013.

The current major athletics construction project is happening on East Campus, where Duke softball’s new stadium is being built before the team begins competition in January 2018.

“The idea of a coherent campus where you have intramural fields, a track, soccer, lacrosse, football, reaching over to tennis, Cameron, including volleyball and all those things, just the idea of a physically coherent athletic campus totally proximate to the residential university campus—that’s Kevin’s achievement,” Brodhead said.

With Duke Forward’s success and long-term impacts being one of Brodhead’s accomplishments, the growth of the University’s athletic facilities has coincided with a broader Duke makeover.

From the recently-opened West Union and Student Health and Wellness Center to the upcoming Arts Center and new dormitories, the University has had to simultaneously balance revamping its main campus and its new venues for sports.

“We’ve had projects all over the place over the last 8.5 years. Dick has been deeply involved in each and every one of those projects,” White said. “If you’ve had the opportunity to listen to anything I’ve said or written, I actually think we’re building facilities for the next 100 years, with the code as it relates to construction today."

Since arriving at Duke in 2004, Brodhead’s relationship with athletics has extended well beyond the high-profile Blue Devil men’s basketball program.

He said one of the many new experiences as president came when he asked Alleva to take him to a wrestling practice in Brodhead’s first year. The former Yale professor and dean had never been at a university that offered wrestling as a varsity sport.

In addition to speaking to many of Duke’s 26—soon to be 27 with the addition of softball—varsity teams, Brodhead also frequently attends sporting events on campus and is well-known for his presence at Cameron Indoor Stadium for men’s basketball.

And when he first arrived, he barely had to step outside his house to watch some of the Blue Devils’ approximately 600 athletes.

“The shot put facility [in track and field] used to be right next to the president’s house. I had a humorous interest in the shot put and discus,” Brodhead said. “Standing in my front yard, you could here this strange thump of the shot put hitting the ground. Now it’s moved. That’s an event I’ve watched. I’m a person of very eclectic tastes."

"I’ve loved every piece of athletics. I don’t love athletics separately from the rest of Duke, I love it together with the rest of Duke. When I discovered that Duke has won 10 national championships during my presidency, I’m pretty proud of that, and in a great range of sports, including men’s and women’s sports, and high visibility. That makes me happy.”

White and Brodhead have worked together on the facilities renovations, but they have also collaborated when hiring new coaches.

Although he recognizes how important building a new softball stadium on East Campus is to the program, Brodhead called getting to know head coach Marissa Young and ultimately deciding she would start the program his joy in the whole process. 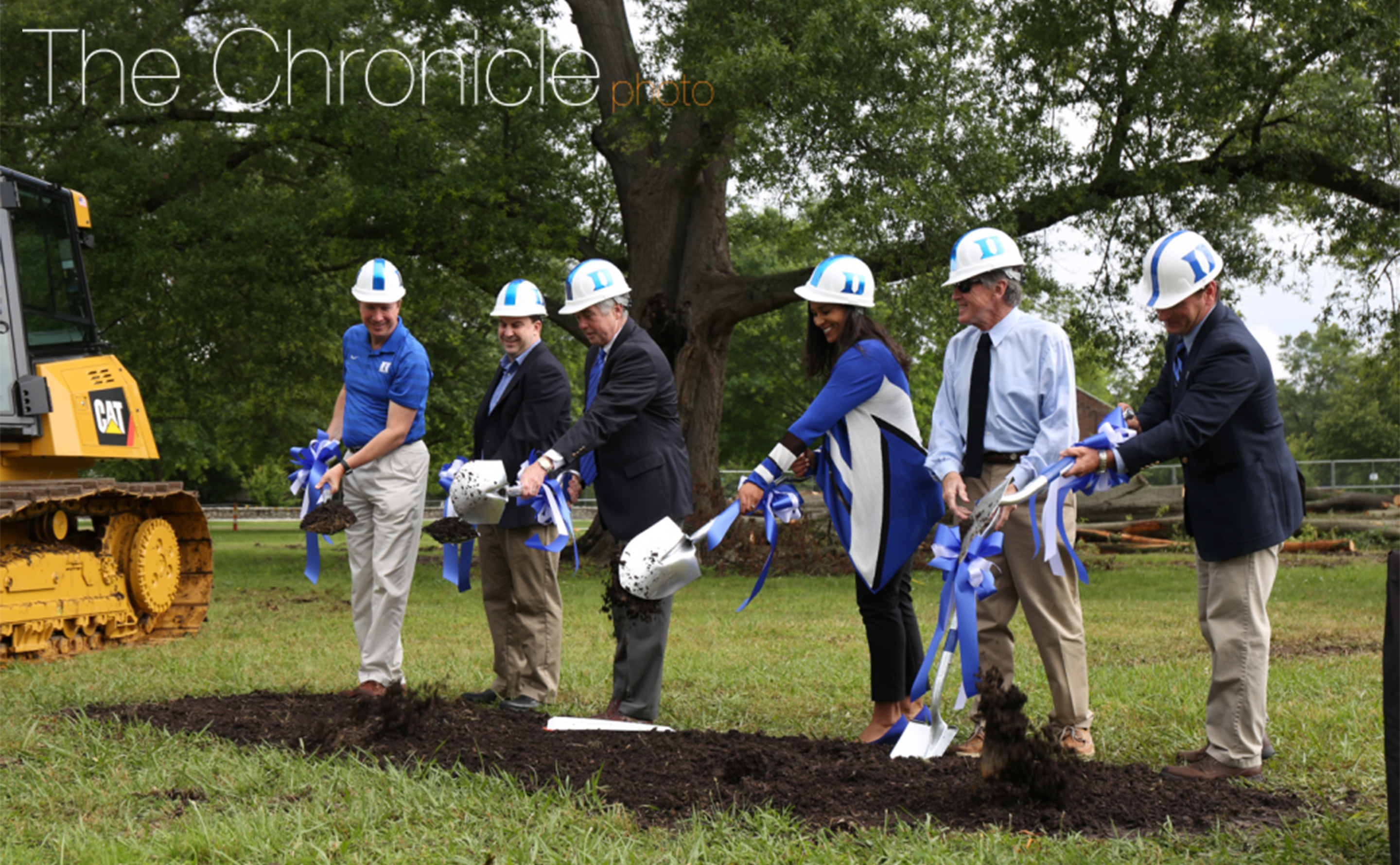 “Dick loves to win, there’s no question about that, at a very high level. He’s most interested in the student-athlete experience. He wants us to get it right, and he wants the student athletes just to have a brilliant experience,” White said. “That’s very much in his DNA. He wants it to be done Duke-like, and he wants it done with very high integrity, and that’s not negotiable.”

It might seem odd for an athletic director and president to frequently text one another, but given how ingrained athletics are in Duke’s student culture, don’t be surprised if White and Brodhead’s replacement Vincent Price have a similar working relationship.

“I think it’s critical for the leader, for the university president, to be involved with athletics,” White said. “It’s an external activity, it’s a part of the institution that affects the image and reputation. There’s a lot of moving parts. It’s a part of the university wherein an institution can enjoy a great reputation and lose it in a nanosecond…. I think a university president, the ultimate leader of a place like Duke, a $5 billion business if you will, needs to have a pretty good pulse of the intercollegiate program.” 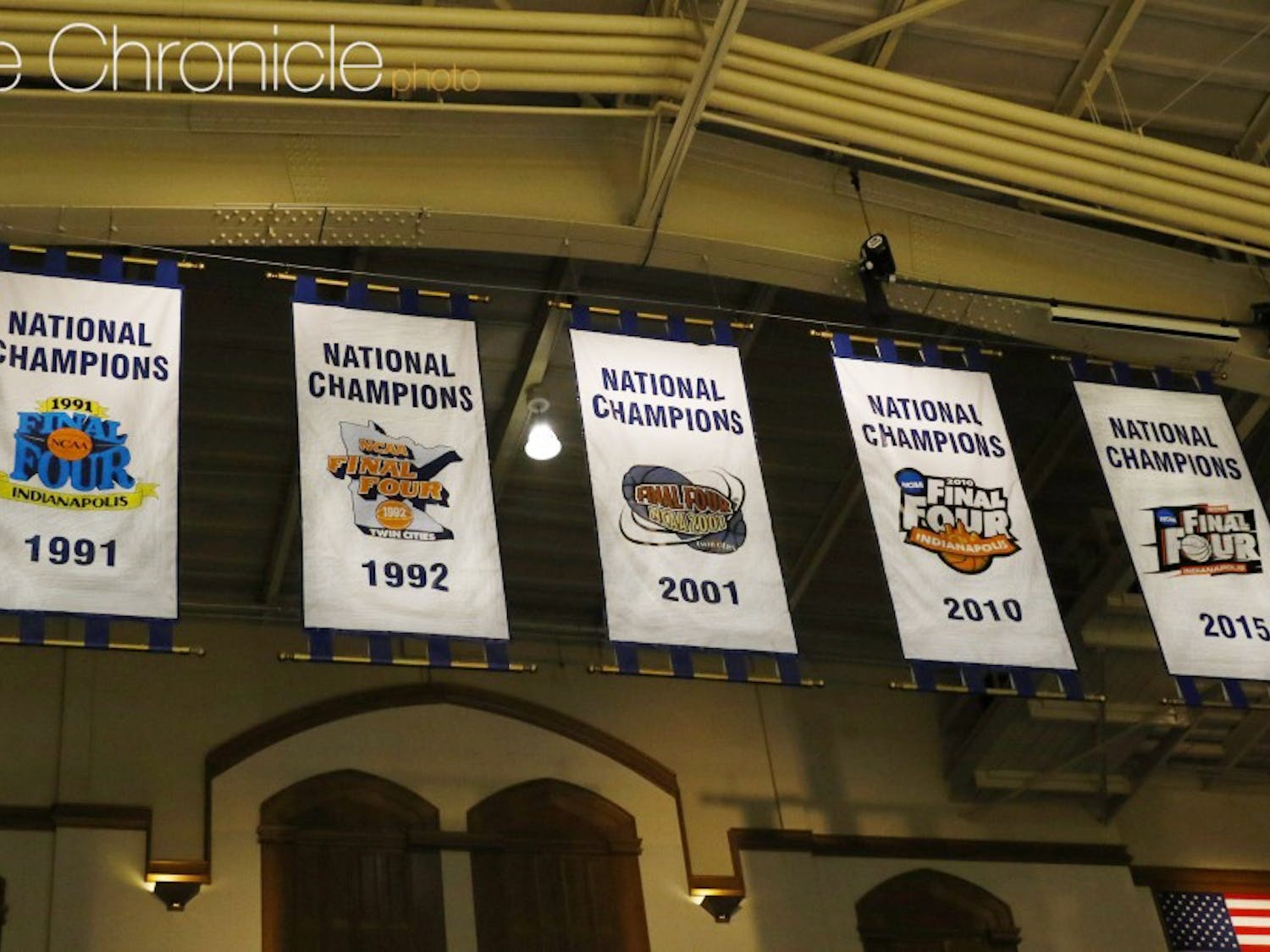 The Blue Devils got rid of their football program from 1895 to 1920 but have since used athletics as a major image-maker.