A little more than two weeks ago, Blue Devil fans watched their team continue its downward spiral. Duke was playing without its head coach, had lost three of its last four games—including a defeat to N.C. State in Durham for the first time since 1995—and seemed to be on its way out of the top 25 for the second time in as many seasons.

But with a pair of consecutive road wins at Wake Forest and Notre Dame, followed by a home victory against Pittsburgh Saturday, the No. 18 Blue Devils are now two games above .500 in ACC play and in the running for a top-four seed in the conference tournament next month in New York.

Duke's rivalry matchup with No. 8 North Carolina Thursday night is as critical a juncture as any game the Blue Devils will play this season. With that in mind, I decided to take a look at some of the key numbers for Duke so far, measuring Blue Devil head coach Mike Krzyzewski's impact as well as where the team can improve during the final month of the regular season.

Not a huge difference, K?

As Krzyzewski took just more than a month away from the sidelines due to lower-back surgery, associate head coach Jeff Capel filled in for the winningest coach in men's Division I history. Many Duke fans were interested in seeing how Capel would fare, as he is expected to be a leading candidate for the Blue Devil head coaching position whenever the 69-year old Krzyzewski decides to step away from the program.

During the seven-game stretch without Krzyzewski, Duke went 4-3—all against ACC opponents, including three teams ranked in the latest AP poll—whereas the Blue Devils have won five of their seven games against Power-5 conference teams with their head coach on the bench. Granted, only two of the latter seven games came against teams currently in the top 25 and just one was a true road game as compared to three without Krzyzewski. 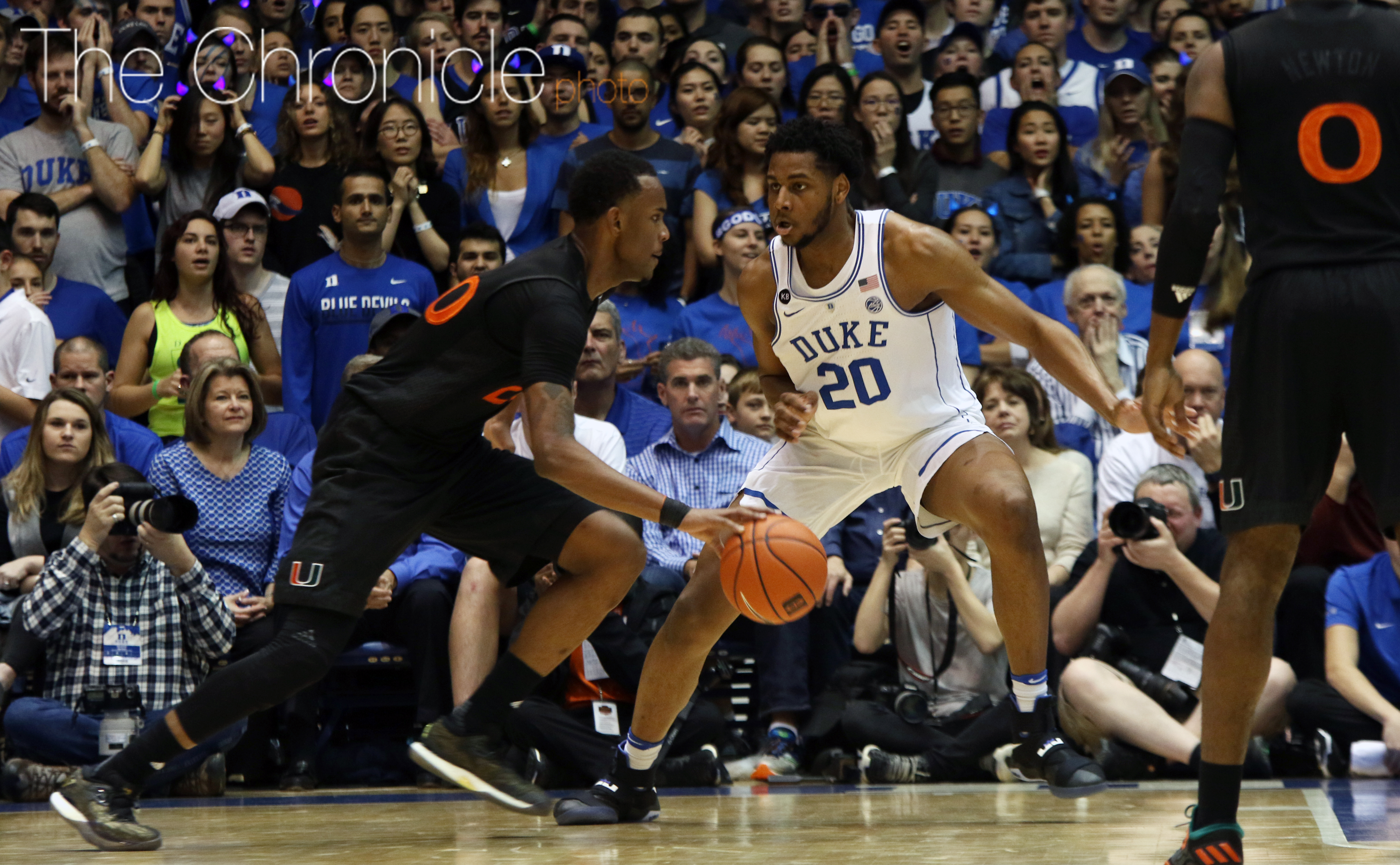 Despite the record disparity, many of the Blue Devils' numbers with Krzyzewski and Capel are nearly identical. With regard to field goal percentage, opponents' field goal percentage and 3-point percentage, the differences between the two coaches are within 2.5 percentage points. Although Duke turned the ball over three more times per contest in those seven Power-5 contests without Krzyzewski, the Blue Devils actually allowed almost four more points in the paint with the five-time national champion active.

Given that interior defense has been Duke's consistent weakness this season, the numbers make it seem difficult to fault the team's associate head coach too much, though the Blue Devils clearly did collapse down the stretch against N.C. State in blowing a late nine-point lead.

Many thought top-20 recruits Harry Giles and Marques Bolden would make an immediate impact for the Blue Devils inside right away. Giles was touted as a dominant scorer all over the floor and Bolden was described as powerful force in the low post. But leg injuries early in the season kept the duo off the floor until Dec. 3 and Dec. 19, respectively, and neither has emerged as the player pundits anticipated in their first collegiate seasons.

Still, each has shown flashes of his potential. Giles played a key role on offense in Duke's last two games, contributing a key rebound and two crucial free throws late in South Bend, Ind., and igniting a 13-4 first-half spurt with a thunderous alley-oop slam against the Panthers. Bolden was a defensive force against Miami Jan. 21, hedging hard on nearly every Hurricane screen then recovering to disrupt Miami's guards and fuel a 20-0 Blue Devil run. 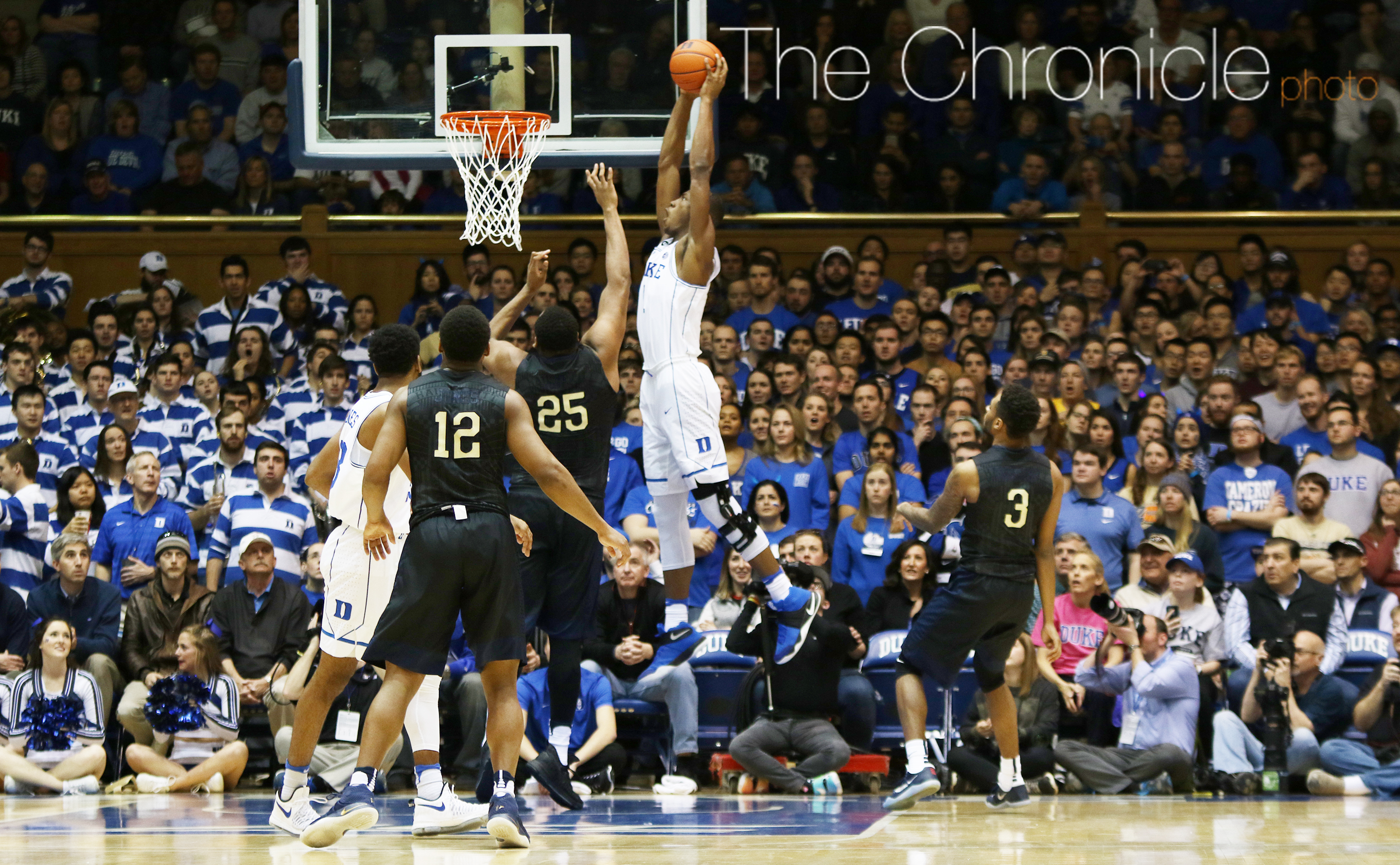 The problem with the two, however, has been their ability to stay on the floor and avoid whistles when on the court. Bolden is averaging 6.6 fouls per 40 minutes and Giles is averaging 8.6—both massive numbers. They are particularly striking when compared to those of Duke's best defenders, Matt Jones and Amile Jefferson, who average 3.1 and 3.0 respectively.

Many have wondered given Giles' occasional offensive bursts—he is averaging 18.1 points per 40 minutes compared to Jefferson's 16.1—and Bolden's recent defensive success why both players are struggling to crack the rotation. But my best guess is that the Blue Devil coaching staff will continue to limit minutes for the freshman duo until both players show they can defend without fouling on a regular basis.

At 19.8 points per game, sophomore Luke Kennard ranks third in the ACC in scoring and has established himself as the Blue Devils' best offensive weapon. Advanced metrics only make this point clearer—as shown by a number of calculations from basketball statistician Ken Pomeroy. With an offensive rating of 132.7, the 6-foot-6 guard sits 14th among all players and third among players used on at least 20 percent of their team's possessions.

Breaking down that rating even further, let's examine how efficient Kennard has been shooting the ball.

Yes, the sophomore is fourth among guards in the league at 53.1 percent, and Pomeroy also has him 27th among all Division I players in true shooting percentage—a measure that includes free throw percentage and gives higher value to 3-point attempts. The Franklin, Ohio, native also sits fourth in the ACC in effective field goal percentage, a similar metric that excludes shots from the charity stripe. 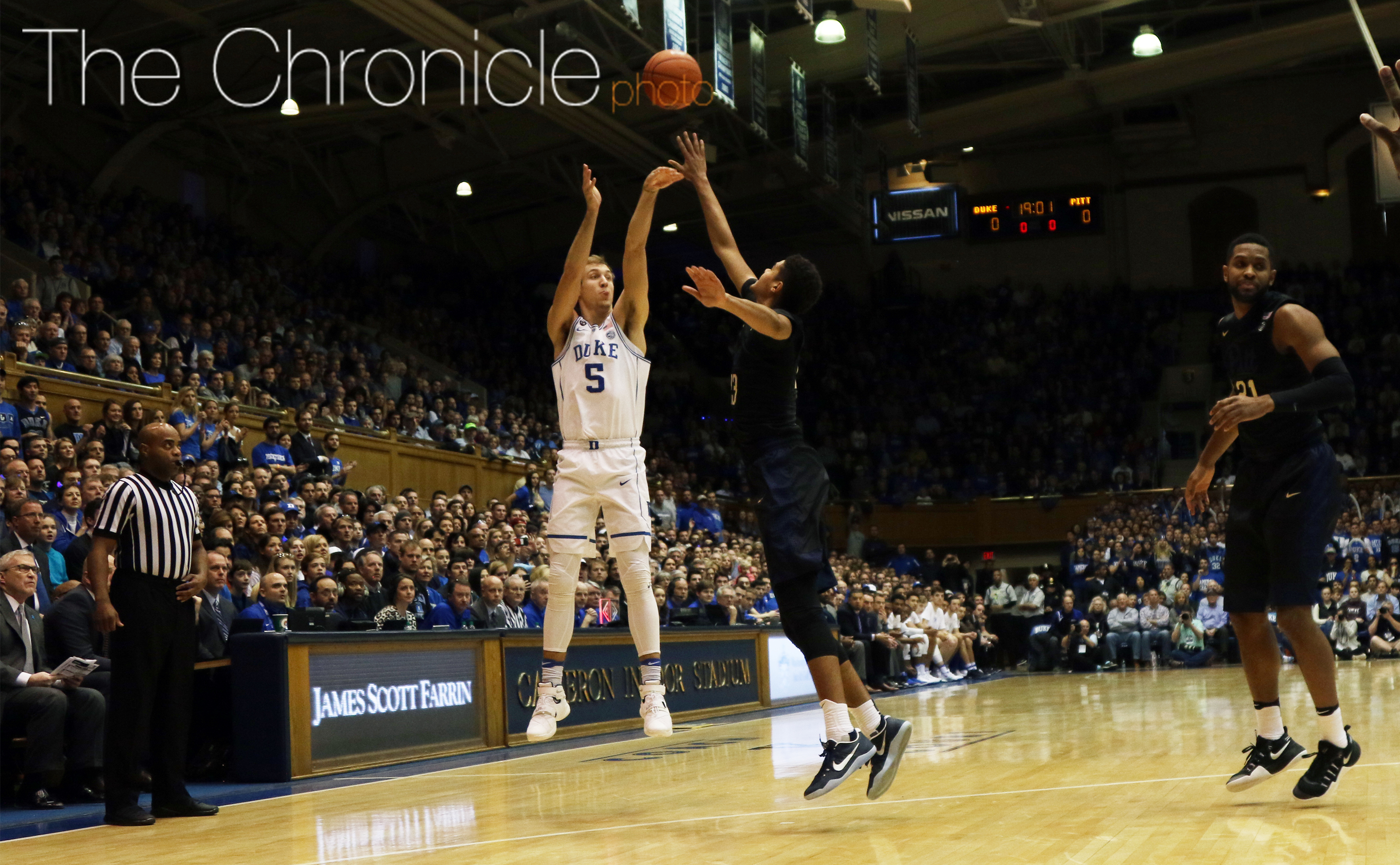 Although many expected Jayson Tatum to put up eye-popping scoring numbers, the rookie has actually stood out more statistically on the defensive end. Despite occasional lapses on defense, the freshman's statistics paint the picture of a solid young defender still with room to grow. Pomeroy ranks Tatum as the ACC's 16th-best individual defensive rebounder, and according to Sports Reference, the St. Louis native is the first Duke player to have both a block and steal percentage of better than 3.0 percent since the site began recording the statistic in 2009-10.

All told, with just more than a month until Selection Sunday, the data hints at a number of positive trends for the Blue Devils as they grow into their roles late in the year. With a challenging slate of games, however, Duke will need to be at its best if it hopes to to turn these trends into on-court success.

Column: Duke men's basketball proves it needs Johnson and Steward at the wheel

'Embraced this new culture': Checking in with Duke rowing

With vaccines on the way, what's next? Experts discuss challenges, potential inequities in distribution