The Chronicle's Jack Dolgin recaps the weekend in Duke sports. The men's basketball team announced Sunday that point guard Derryck Thornton will transfer after just one season with the Blue Devils, and the men's lacrosse team fell 8-6 at top-ranked Notre Dame. Duke baseball took a series from No. 21 Clemson for just the second time since 1998, and the women's tennis and women's lacrosse teams cruised to home wins against Boston College.

This week's cover highlights the Duke women's lacrosse team, which battled gusting winds during its 12-8 win against Boston College Saturday at Koskinen Stadium on Senior Day. Sportswrap is your one-stop shop for everything that happened this weekend in the world of Duke athletics.

Derryck Thornton transferring from Duke men's basketball: Less than a year after committing to Duke, point guard Derryck Thornton will transfer elsewhere to continue his college career. The Chatsworth, Calif., native reclassified from the Class of 2017 to join the Blue Devils a year early and contributed 7.1 points and 2.6 assists per game as a freshman. Tasked with stepping into the big roles vacated by Tyus Jones—who left early for the NBA—and Quinn Cook as the lone true floor general on the roster, Thornton shot 38.6 percent from the field and posted a 1.5 assist-to-turnover ratio, but his role shrunk in Duke's last six games of the season, never playing more than 25 minutes in any of those contests.

Duke football closes out spring camp with scrimmage Saturday: Duke concluded its slate of spring practices with a two-hour practice session and scrimmage at Wallace Wade Stadium, one final opportunity for head coach David Cutcliffe and his coaching staff to gauge the Blue Devils’ strengths and weaknesses before summer practices begin in August. 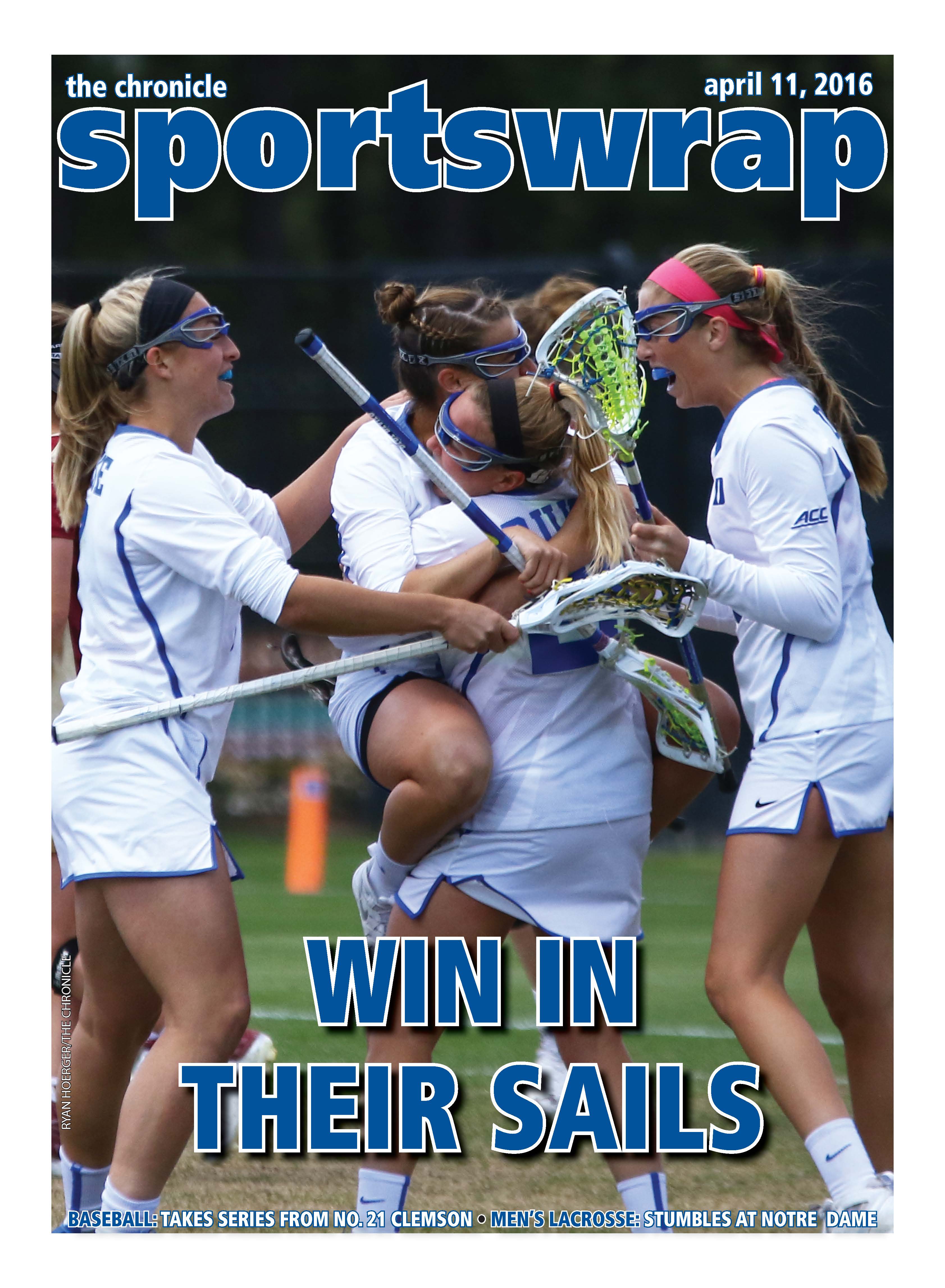 Notre Dame defense clamps down on Duke men's lacrosse in second half as Fighting Irish prevail 8-6: Junior midfielder Sergio Perkovic scored the tying and go-ahead goals in the fourth quarter as the No. 1 Fighting Irish escaped the No. 13 Blue Devils 8-6 Sunday to remain alone atop the ACC standings. The Blue Devils scored just once in the game’s final 26 minutes as the Fighting Irish wore Duke down and closed the game on a 5-1 run, sealing the victory with a goal from senior Kyle Trolley.

Duke baseball comes from behind again to beat No. 21 Clemson in series opener: Despite trailing 2-0 and 3-1 early, Duke extended its winning streak to four games with a 5-3 victory against No. 21 Clemson Friday night at Jack Coombs Field. Sophomore Peter Zyla paved the way at the plate with three hits and two RBIs in three at-bats, and the bullpen came up clutch again, tossing four scoreless innings in relief of starter Bailey Clark.

Dive attempt comes up short as 2-out triple lifts Clemson past Duke baseball: Junior Chris Okey smacked an 0-2 pitch into the gap in right-center for a go-ahead triple with two outs in the top of the ninth inning, lifting the Tigers past the Blue Devils 3-2 to snap Duke’s four-game winning streak.

McAfee's complete game helps Duke baseball take series from Clemson: Duke right-hander Brian McAfee threw a 108-pitch complete game to carry the Blue Devils to a 2-1 victory against No. 21 Clemson Sunday, allowing just nine total baserunners and striking out six. The win gave Duke its first series win against the Tigers since 2010—and just its second since 1998—and continued the momentum from last weekend’s series win at then-No. 23 Georgia Tech.

Duke women's lacrosse holds off Boston College in second half on Senior Day: The No. 13 Blue Devils lost a three-goal halftime lead, but recovered to beat No. 17 Boston College 12-8 on Senior Day at Koskinen Stadium. Sophomore Kyra Harney led the way with four goals and an assist, senior Maddy Acton added a hat trick and an assist and senior Kelsey Duryea came up with seven saves between the pipes.

Duke women's tennis races past Boston College with straight-set victories: The No. 8 Blue Devils got back on track in conference play, cruising past a short-handed Boston College squad 6-1 at the Sheffield Indoor Tennis Center.

Duke track and field claims 5 event wins at Spec Towns Invitational: With windy conditions wreaking havoc in the field events, the Blue Devils stepped up on the track to provide the weekend’s highlight performances.

Virginia speeds past Duke rowing on Rivanna Reservoir: In the face of strong winds throughout the afternoon, Duke had difficulty adapting to the taxing weather conditions, losing all five races to the No. 3 Cavaliers, four of them by at least 15 seconds.

Quote of the Week:

“I told our guys before the game, ‘Think about how you would have felt if you had won that ballgame yesterday. The confidence, the four straight ACC wins, the five straight wins overall. You’re that team. That one pitch didn’t change that. That’s who you are and who you’ve become, so go play like that today,’ and I think they answered the call"

DUST IN THE WIND: Duke football falls to Kansas on the road for first loss as comeback attempt falls short

5 observations and more from Duke football's first half against Kansas

Revolution of (all) time: The obsessed and ephemeral in ‘Blue Island’

What's so special about peanuts?

Duke doesn’t want me. Neither does my home.