The Chronicle's Jesús Hidalgo recaps the weekend in Duke athletics, which included a 76-72 loss for the men's basketball team in its Tobacco Road rematch with North Carolina, giving the Tar Heels the ACC regular season title. The women's squad was routed in the ACC tournament quarterfinals by Notre Dame, putting the Blue Devils' NCAA tournament hopes on life support, and Duke wrestling qualified four grapplers for the upcoming NCAA championships as Conner Hartmann repeated as ACC champion at 197 pounds. Sportswrap is your one-stop shop for everything that happened this weekend in Duke athletics.

Not this time: North Carolina downs Duke men's basketball to clinch ACC regular season title: Once again, Brice Johnson did anything he wanted to on the offensive glass—this time for the full 40 minutes. Johnson's 18-point, 21-rebound performance helped No. 8 North Carolina bruise its way past No. 17 Duke 76-72 Saturday at Cameron Indoor Stadium. 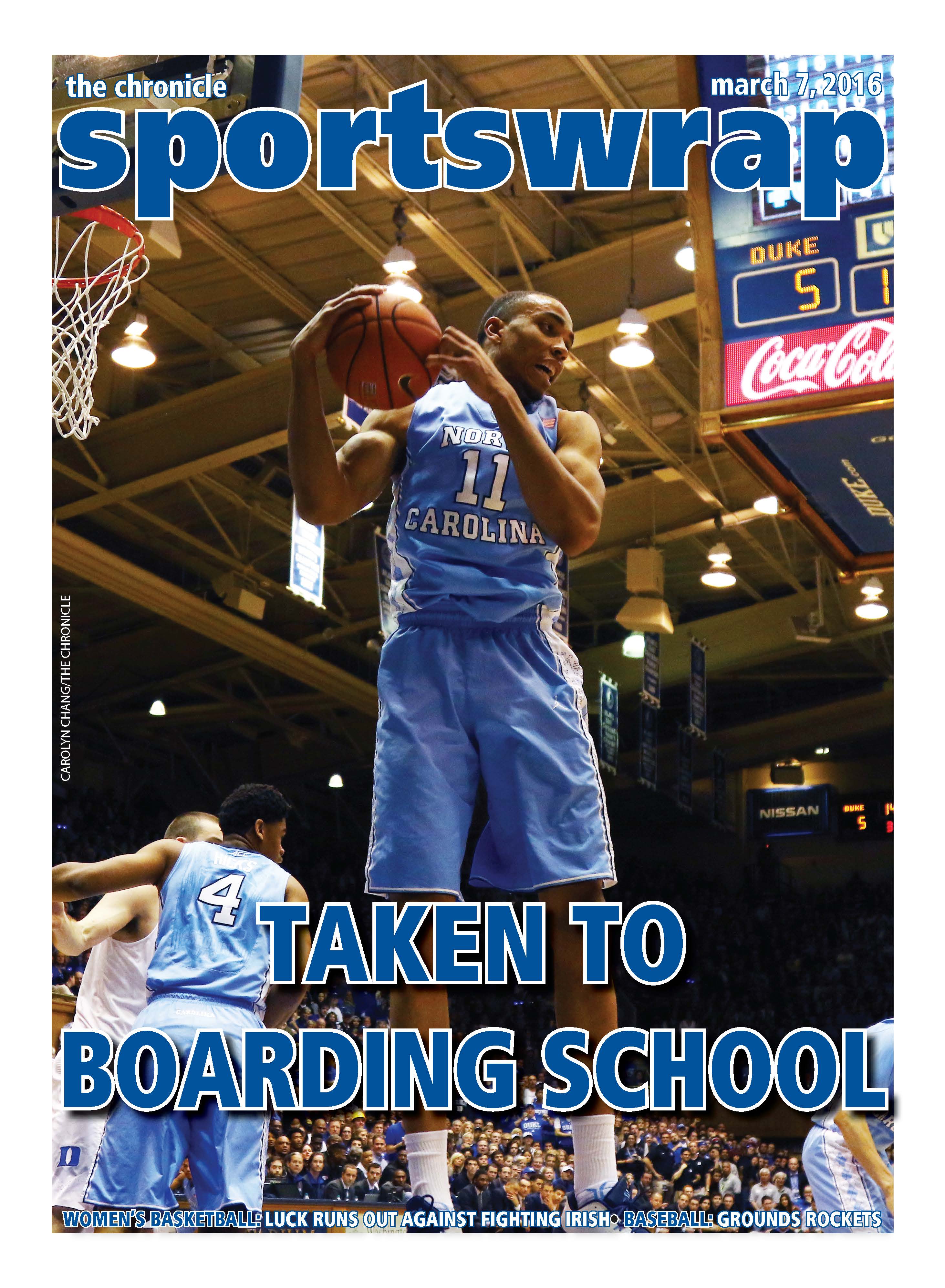 Ingram's foul trouble disrupts Blue Devils on both ends of the floor: When Duke has been successful this year, it has mostly been on the backs of two players—Grayson Allen and Brandon Ingram. But in the Blue Devils' showdown with North Carolina Saturday, they were missing contributions from half of that couple.

Amile Jefferson to miss rest of season, Duke will seek medical redshirt: Duke senior captain Amile Jefferson will miss the remainder of the season and will seek a medical hardship waiver, the team announced Saturday afternoon.

Now out for the season, Jefferson's absence underscored in loss to North Carolina: Before Saturday’s game even tipped off, Duke officially announced what many had suspected with growing certainty—Amile Jefferson will not return to the court this season. With the captain on the sidelines, Duke now plays three guards at all times and has had trouble dealing with interior-oriented teams—a fact North Carolina made painfully clear Saturday, outrebounding Duke 64-29.

Duke women's basketball holds off Virginia to stay alive in ACC tournament: Sophomore forward Azurá Stevens showed no rust in her return from injury, posting her usual double-double to help Duke escape with a victory to keep its NCAA tournament hopes alive.

Offensive rebounding helps Blue Devils move past Cavaliers in Stevens' return: With outside shots not falling, the Blue Devils needed to go back to their old ways to grind out a win—all helped by the return of their star player.

Second quarter struggles doom Blue Devils against Fighting Irish: Duke’s only chance to compete with No. 2 Notre Dame was to slow the game down, and for one quarter, it did just that. But things quickly unraveled during a fast-paced second quarter, sparking a rout that ended the Blue Devils’ tournament.

Duke baseball launches three late doubles to beat Rockets 2-1 in pitcher's duel: A late seventh-inning rally helped the Blue Devils come from behind to defeat Toledo 2-1 at the Durham Bulls Athletic Park in the first meeting of a three-game weekend series.

Third straight quality start propels Duke baseball to sweep of Rockets: After struggling at the plate Friday and Saturday, Toledo entered Sunday's series finale trying to get its offense on track. But Brian McAfee made sure the Rockets continued to fizzle with another dominant Blue Devil performance on the mound.

Duke football opens spring practice Saturday with Boehme as starter: By this time most years, the Blue Devils are getting ready to put away their pads, about to head off for spring break after another spring practice. But with an internal reshuffling of the coaching staff and an unexpected injury to starting quarterback Thomas Sirk, Duke head coach David Cutcliffe decided to slow things down.

David Cutcliffe reacts to news of Peyton Manning's retirement: After 18 years in the NFL, No. 18 is finally going to call it quits. For Duke head coach David Cutcliffe—who coached Peyton Manning during his college days at Tennessee from 1995-98—there was nothing but the highest of compliments to award his former signal-caller.

Harvard's 8-0 spurt pushes Crimson past Duke men's lacrosse Saturday: Duke stayed close through the first quarter before Harvard exploded for eight unanswered scores throughout the second and third quarters as the Blue Devils endured a 30:39 stretch without finding the back of the net.

Yellow Jackets come back to sting Duke men's tennis in ACC opener: After the Blue Devils stalled the Yellow Jackets' momentum following doubles play, Duke battled hard in singles and arrived at the doorstep of victory with a 3-1 lead. But the Yellow Jackets turned out to have more fuel in their tank and erased the deficit with two three-frame wins.

Thoughts on the AP Poll: Duke women's basketball stays at No. 16 after win vs. Virginia Tech, loss at Florida State

Duke women's tennis upset on the road against Virginia Tech: Following two consecutive wins against ranked opponents, the Blue Devils found themselves on the wrong end of an upset this weekend.

Quote of the Week:

"If we play like this in the postseason, it’s not going to be good”
—Duke sophomore Grayson Allen, after the Blue Devils were outrebounded 64-29 in a 76-72 loss to No. 8 North Carolina Saturday at Cameron Indoor Stadium