This story is part two in a two-part investigative series. Part one, which ran Monday, examines an August 2014 incident in which Executive Vice President Tallman Trask hit a contract parking employee, Shelvia Underwood, with his car and allegedly used a racial slur as he drove off. Part one can be read here.

The incident involving Tallman Trask is connected to a larger problem within Duke’s administration and the Parking and Transportation Services department, current and former members of PTS said.

The Chronicle spoke with 12 current and former members of PTS, who described the environment within the department as hostile and its current leadership as discriminatory.

Renee Adkins, former special events manager for PTS, wrote an email to President Richard Brodhead Jan. 15 describing a culture of “racism, harassment, retaliation and bullying” in the department fostered by PTS Director Carl DePinto and Vice President for Administration Kyle Cavanaugh. Several employees noted that in the parking division of PTS in particular, a disproportionate number of black employees have been terminated since DePinto arrived in October 2014.

Adkins wrote in the email to Brodhead that after Trask hit Shelvia Underwood, there was neither a public administrative response nor a thorough investigation by Duke University Police Department. DUPD is overseen by Cavanaugh, who  reports to Trask.

Adkins added that the event was one of “innumerable incidents” in which she and members of her staff were called “n*****, coon, porch monkey, bull dagger and dyke while working Duke special events.” These occurrences were all “swept under the rug” by administrators, Adkins wrote.

After initially not responding to a request for comment, Cavanaugh—who also  oversees PTS and Human Resources, among other departments—provided The Chronicle with a statement on behalf of the leadership of PTS and HR. In the statement, Cavanaugh wrote that although he cannot comment on the circumstances of individual cases, any complaints have been “thoroughly investigated and resolved.”

Brodhead and DePinto did not respond to The Chronicle’s multiple requests for comment. Ben Reese, vice president for institutional equity, and Cynthia Clinton, director of harassment and discrimination prevention and compliance for the Office of Institutional Equity, declined to comment. 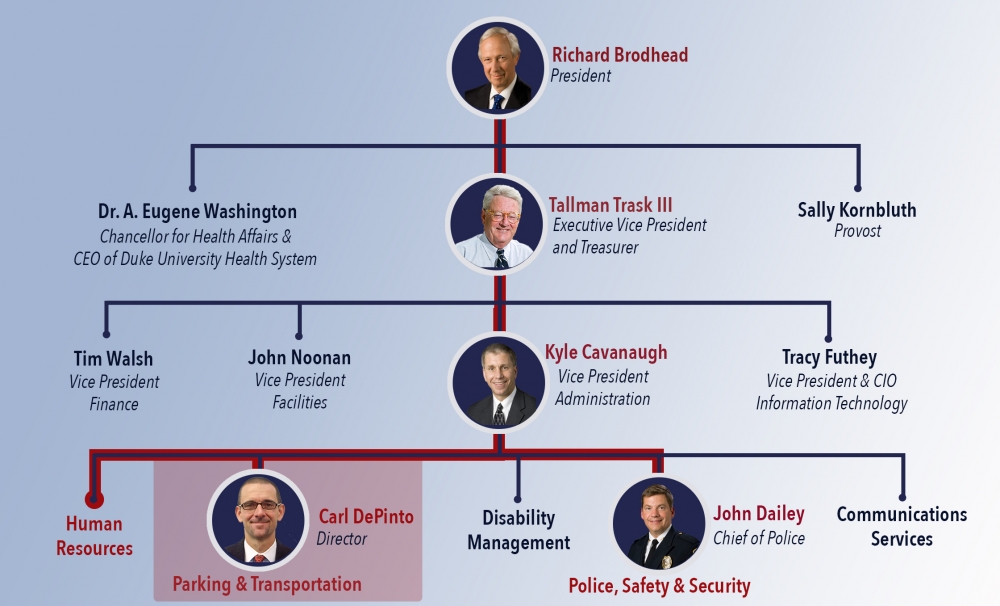 ‘Anything I said was wrong’

Adkins, who was one of the first people who heard that Underwood had been hit, said she was not surprised by administrators’ lack of response following the incident.

Adkins said she told one fellow co-worker, who wished not to be identified for fear of retaliation, “This is Duke University. She is black, I am black and they’re not going to do anything.”

After working at Duke for more than 18 years, Adkins—who knew so many people that coworkers said she was called “the mayor”—was terminated for insubordination Jan. 23, 2015, after asking DePinto to “please shut up” when he talked over her repeatedly.

She said DePinto was writing her up for incidents that had occurred more than a month before and interrupted her when she attempted to offer an explanation and proof that the issues he described had been resolved.

“I was insubordinate, and I don’t deny that,” Adkins said. “But people have done far worse and kept their jobs. I dedicated 18 and a half years to this University, and I loved it. To be treated the way I was treated was horrible.”

Several other staff members said DePinto also talked over them and ignored their suggestions and questions. They added that DePinto seemed to target Adkins and those close to her in the department.

Adkins said the punishment she received for her insubordination—termination—seemed undeservedly harsh. She cited an incident in which Reymond Milan, a former parking events specialist who identified himself as Hispanic, angrily yelled and cursed at DePinto, but was neither terminated nor punished. Milan confirmed that in April 2015, he was upset about responsibilities being taken away from him and entered DePinto’s office and yelled at the director so loudly that “everyone in the office heard me.”

“I thought I was going to be fired the next day, and I could’ve been fired,” Milan said. “I was insubordinate.”

Adkins appealed her termination, but it was upheld after an arbitration hearing in October 2015. The list of expectations of conduct and performance on the Duke Human Resources website recommends a “final written warning” as the sanction for insubordination rather than termination, but states that “Duke reserves the right to affect immediate termination, if such action is deemed necessary.” Adkins said she did not receive any written warning before she was terminated.

Milan said he testified on Adkins’ behalf during her arbitration. He said that after the arbitration, he felt intimidated by leadership and thought his job was at risk every day. Milan said once he was able to find another job in November 2015, he left the department.

“All we wanted to do was our jobs, and they didn’t want that,” Milan said.

‘Everyone was walking on eggshells’

Current and former members of PTS interviewed by The Chronicle—both those who had worked closely with Adkins and those who had not—described the environment within PTS as hostile.

Former lead transit supervisor Marian Brown, who worked at Duke for 23 years, said that during the last six to seven months before her departure in August 2015, the office was “like a powder keg, like everyone was walking on eggshells.”

Employees stated that after his arrival, DePinto never articulated goals or expectations for the department and rarely spoke to employees. The employees also suggested that DePinto particularly discriminated against employees of color.

“Carl just came in with some sort of an agenda,” said Brown, who is black. “The sense was that he was supposed to remove the people of color.”

Joyce Wagner, who said she was the only white transit supervisor in the department, also said that most of the people DePinto let go were black, and that she did not “know of any white people that he let go.”

The Chronicle received no response to a request sent to multiple PTS administrators for an official demographics report.

In February 2016, according to the unofficial demographics, 76 percent of employees in the transit division, including bus drivers, van drivers and mechanics, were black. The demographics provided did not include information on transit employees from previous years. 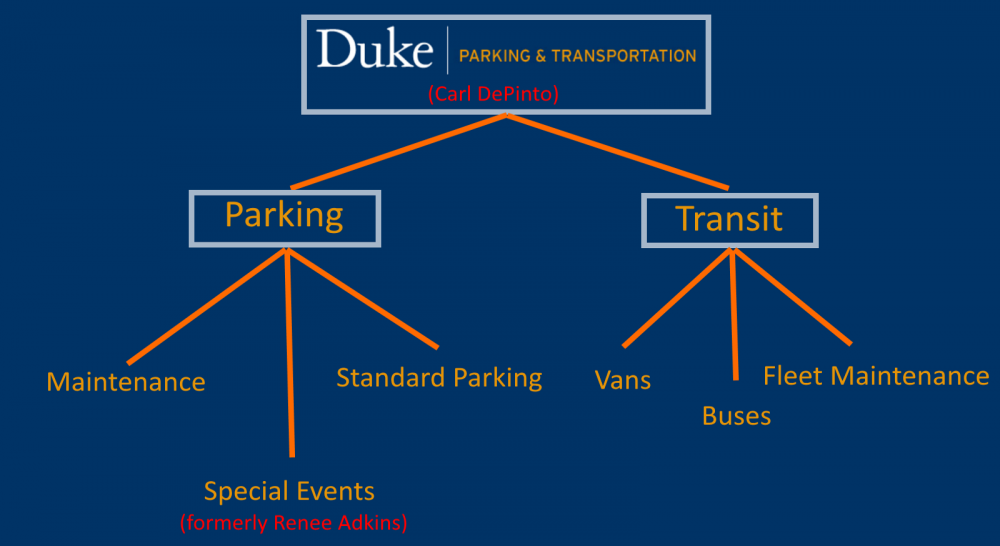 Current and former employees said that in addition to disproportionate numbers of black employees being forced out by DePinto, black employees were also subjected to specific instances of discrimination while they worked in the department.

Several black employees said that after years of using cell phones provided by the University while working events, DePinto and Melissa Harden, assistant director of PTS, asked them to turn their phones in but allowed white employees to keep their phones.

Harden did not respond to multiple requests for comment from The Chronicle.

In an email to Clinton May 21, 2015, Adkins wrote that DePinto granted her and her staff less overtime than other PTS members—noting that they would receive two or three hours of overtime for basketball games. Other employees would receive between six and eight hours for the same games, she wrote.

Adkins wrote in an email to The Chronicle that in an annual performance evaluation from June 2015, DePinto rated all but one white person who reported to him “S” or “S+.” Every person of color who reported to DePinto was rated “S-,” Adkins wrote.

One former employee, who wished not to be identified for fear of retaliation, wrote in an email that these performance ratings directly impact merit increases—defined by Duke HR as pay increases based on performance evaluations. The former employee added that all ratings were reviewed and approved by Cavanaugh.

Brown added that DePinto treated employees like they were ignorant and would say things such as, “Let me dumb it down for you.”

She said that she left the department after hearing from another employee that she was on DePinto’s “hit list.”

Wagner, who worked at the University for 22 years, said she also retired because she felt like she might be terminated by DePinto.

“The man himself came in with an attitude—my way or the highway,” Wagner said.

In her email to Brodhead, Adkins asked the president to meet in person about the Trask incident and the complaints employees had raised—noting that she had twice before requested meetings but had been told by his assistant that he was “too busy.”

Richard Riddell, vice president and University secretary, replied to Adkins’ email Jan. 20, five days after she had sent it, stating that the incident with Trask and the parking attendant had been investigated, and that the allegations against Trask could not be verified due to insufficient evidence.

Riddell’s email did not address Adkins’ concerns about the hostility within the PTS department. 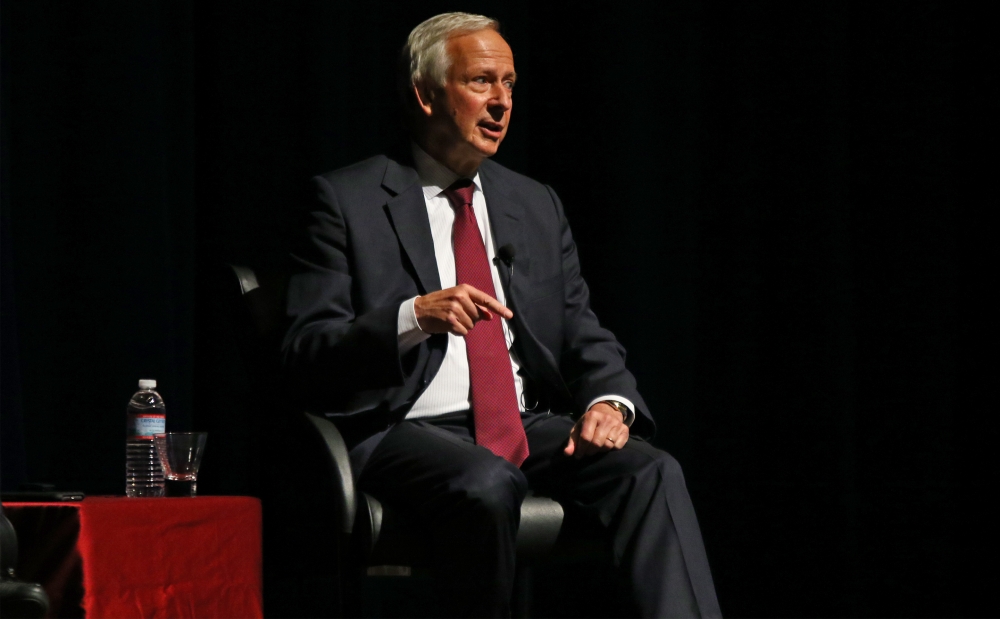 Cavanaugh’s statement to The Chronicle on behalf of PTS and HR noted that the University has initiated “a number of changes in PTS to address longstanding challenges related to customer service, costs, facilities, vehicles and communication issues.”

He wrote that new leadership is implementing the changes, and that he is encouraged by “positive progress” being made within the department.

“Change can be unsettling for some,” Cavanaugh wrote. “But any employee—including an employee who believes he or she has been discriminated against personally—is encouraged to access established complaint channels both within and outside of Duke. Those channels are in place for the precise purpose of objectively sorting out employee complaints.”

He noted that any complaints that have been brought to HR, OIE, the U.S. Equal Employment Opportunity Commission or to independent arbitration have been investigated and resolved.

Several current and former PTS staff stated that they went through the “established complaint channels” described by Cavanaugh—including HR, OIE and the EEOC—but received little in the way of helpful response.

“Nothing gets done, nothing happens,” Milan said. “Carl gets away with everything because the person above him is allowing it. I know it’s Kyle Cavanaugh.”

One current employee, who wished not to be identified for fear of retaliation, said there is “no recourse for us to go have open conversations with Kyle [Cavanaugh] or anyone else” to address the issues within the department.

Wagner said that once Adkins, Kareem Cross—a former black parking services assistant in the department—and Gilbert Singleton—a black transit supervisor who worked at the University for 13 years—were fired, she saw “the writing on the wall” and went to talk to HR about early retirement.

“We all felt like [DePinto] pushed us out the door,” Wagner said. “We didn’t want to go, but it looked like we didn’t have a choice.”

Like Adkins, Cross said he had never received a complaint before his termination. He was fired by DePinto in January 2015 and said DePinto did not give him a “real reason” when he terminated him. His official termination stated that he had failed to complete his assigned work. Cross described the appeal process following his termination as “a joke.”

“Duke is not being fair,” Cross said.

He explained that he spoke with Clinton about his concerns during Fall 2014, but that he never heard anything from her after the meeting.

“There are no external structures built in place to address these complaints, to protect us,” said one current employee, who wished not to be identified for fear of retaliation. “There is no oversight. We’re like a dog chasing its tail.”