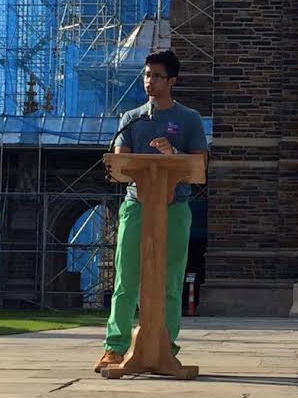 Sophomore Shadman Uddin is campaigning for Democratic candidate Bernie Sanders. A native of Roswell, Ga., he is majoring in public policy with a minor in economics and a certificate in Marxism and society.

Background on his interest in politics: I grew up in a low-income neighborhood and therefore was exposed to the lack of attention given to the lower-income people of this country. I believe politics is a big impetus for change to alleviate systemic poverty in the U.S.

What’s it like working on the campaign? The beauty of Bernie’s campaign is groups take control on their own. It’s a very grassroots approach, and that way we can compete without much money. We hand out bumper stickers, regular stickers and other Bernie materials. Students have canvassed, done phone banking and knocked on doors.

How do you balance schoolwork with campaigning? I see campaigning as any other club. Also, we don’t have a president or a vice president at Duke for Bernie. Our 10 core members shoulder all of our responsibilities together, which means when it’s convenient for somebody to take charge of one thing, he or she can take charge.

Why Sanders? I believe inequality can be solved through politics. I wouldn’t call Bernie a communist, but he tends to take a government-heavy approach, which is why I like him. I believe the biggest things that impede success are money and politics. Big groups have more of a say in our democracy than regular citizens do, which is not what our founding fathers intended. 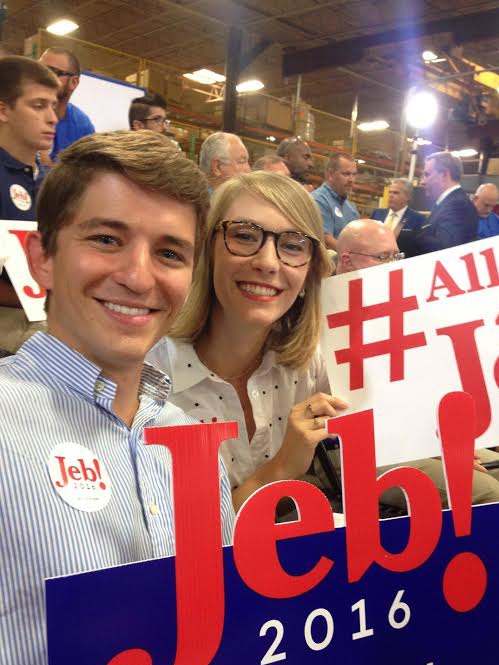 Senior Mac Findlay is campaigning for Jeb Bush. A native of Chicago, he is double majoring in economics and history.

Background on his interest in politics: I grew up in a family that was very interested in politics, so I started volunteering for campaigns at age 11. The summer following freshman year, I worked in Washington as an intern for Erik Paulsen, a Congressman from Minnesota. This past Fall, I started writing for Duke Political Review, where I’ve been doing columns on policy positions in the primaries.

How did you get involved with the campaign? I got connected with Daniel Strunk [Trinity '14] over the summer, who I knew through some friends and through Duke Republicans. Strunk was working on Jeb’s campaign at headquarters in Miami, and we talked. Then I became involved in starting a Duke Students for Jeb chapter with Strunk back in September. I work for the millennials policy team and make phone calls. By the end of last semester and over break, I began doing more policy-related stuff.

What’s it like working on the campaign? It’s very cool to follow from the inside of the campaign. It’s exciting, and I like feeling involved while working on policy-related things. Despite the small role I play in the campaign, I feel very invested in the results. This weekend, I went to Iowa on my own dime to do independent work as a journalist for DPR. I’m going with two other DPR people to hear rallies and then write on the subject.

How do you balance schoolwork with campaigning? It hasn't been bad at all. Work has been pretty intermittent, and the phone calling is completely on your own time.

Why Bush? I always thought Bush was a fantastically moderate Republican. He’s not afraid to speak out on certain issues that Republicans are often afraid to speak out on. The most obvious of these issues is immigration. Jeb has embraced friendly immigration policies while also appealing to the necessity of securing the border. Additionally, Bush knows his stuff. He’s not just going to rallies in Iowa and ranting. He’s a calm and composed leader. 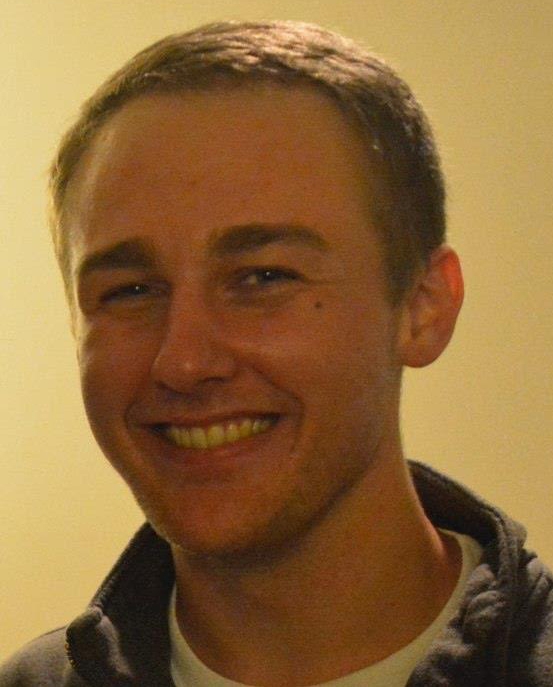 Senior Logan Brundage is campaigning for Hillary Clinton. A native of DeWitt, Iowa, he is studying political science.

Background on his interest in politics: Coming from Iowa, I remember the political season every four years was very exciting. In 2007, when it was Hillary against Obama, I’d go home each afternoon and watch the race on CNN from 4 p.m. until 10 p.m. In 2012, I worked for Obama’s campaign. I went with Duke Democrats to Asheville over fall break and knocked on doors. This past summer, I worked in Washington, and this past winter break, I was a Caucus Fellow.

How did you get involved with the campaign? An organizer from my hometown called me and introduced himself back in the fall. We chatted, and he encouraged me to apply for the Caucus Fellowship in Iowa.

What’s it like working on the campaign? As a Caucus Fellow this past winter break, I worked for the third region in Iowa, which is based in Davenport. I lived at home in DeWitt, and canvassed while also making phone calls. I got to work one event in Davenport where I heard Hillary speak. I greeted the guests as they arrived and helped them through security. Since I returned to school, I’ve helped remotely by making some phone calls.

'All about the people on the team': Provost Sally Kornbluth reflects on nearly three decades at Duke, transition to MIT presidency

How do you balance schoolwork with campaigning? Since I’ve been back, I’ve done an hour of calls two or three times per week. It’s doable and not a huge time commitment.

Why Clinton? She’s definitely the most bipartisan candidate we can elect, and also the most practical candidate. She’s a skilled leader with experience that she can use to impact change. As Secretary of State, she has relationships she’s formed around the world. She also maintains a strong domestic agenda—it’s practical, and good for the economy and middle class.

The problem with 'Duke English'

Then and now: How has Duke men's basketball changed since its first matchup against Wake Forest?