This month, Towerview headed out to find at the best taco around town. Check out our top picks below.

Note: Chubby’s Tacos has changed its name to Guacamaya Fresh Mex, but as it is Chubby’s and not Guacamaya that the author fell in love with, he will be referring to it as Chubby’s for the duration of this article. Also, Chubby’s is more fun to say than Guacamaya.

Any Duke student or faculty member worth their salt and with at least an ounce of love for delicious Tex-Mex in their veins has been to Chubby’s. Hell, you’re probably there right now, aren’t you? Good for you.

The small restaurant, tucked away in between Metro 8 and Banh’s Cuisine on Ninth Street, right behind East Campus, greets you with a calming salmon-painted outer exterior. The sign sports a simple but memorable design, featuring bold, black letters proclaiming, “CHUBBY’S TACOS” paired with an obese (or big-boned) sombrero-wearing mouse chowing down on a taco you wish you had instead. It doesn’t necessarily scream great taco shack from the outlook, but it is inviting and warm enough to get you in the door. And once that happens, you’ve already lost the war.

Chubby’s is one of the few Durham restaurants I find myself frequenting at least once every few weeks, and that sentence is as true now as a senior as it was four years ago, when I was kicking it in pre-renovated GA3 just looking for some nachos to break me out of my Marketplace routine. 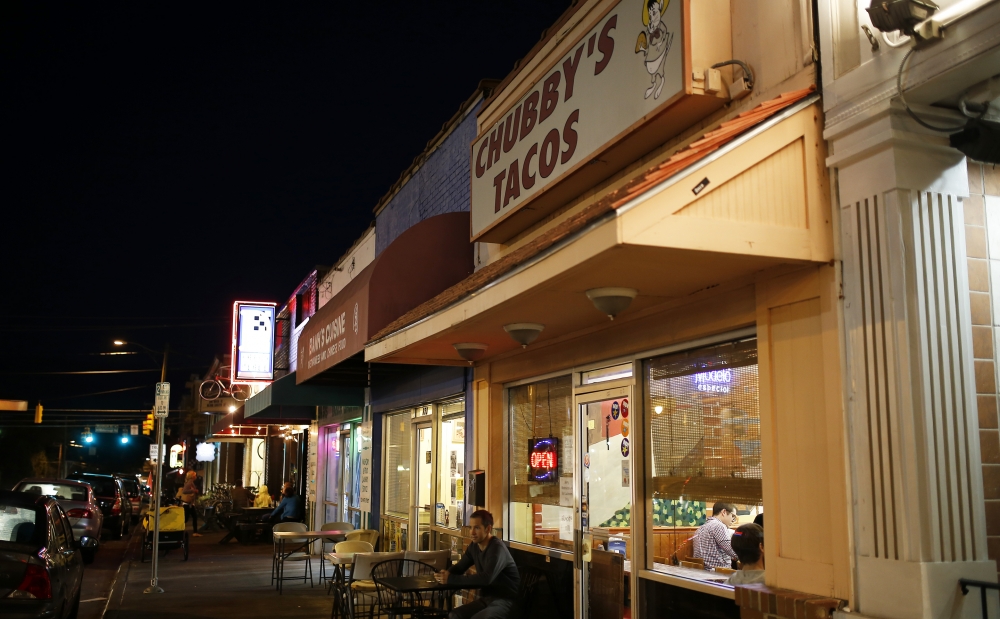 I know that we’re supposed to be talking tacos here, but Chubby’s nachos are my muse. Objectively, I acknowledge that these nachos are far from the best I have ever had, but still, when I need my fix, I know where I’m going. Even if I’m going somewhere else for a quick bite, just knowing that Chubby’s nachos are there just in case grants me a sense of order—and the occasional stomach rumble. The creative geniuses behind the boards stack a pile of chips impossibly high with your choice of meat—I usually go with the ground beef or chargrilled chicken—black beans, lettuce, tomatoes, sour cream and, of course, melted cheese. It’s a damn work of art (Ed. Note: not really) and should you ever be starving, suffering from the munchies or looking to split a bite with your friends, the nachos should forever and always be your first choice (dismount from illogical soap box).

Now, their tacos, namely their shrimp taco—although already suffering from not being nachos—are indeed delicious. Like all real tacos, Chubby’s serves their delicacies on corn tortilla shells. The difference, however, from the rest of the place I’ve been is that instead of one measly shell, they double wrap their taco, which, for a slob such as yours truly, is a blessing in disguise. The shrimp—despite being seafood, a food group I usually stay away from—is tender and delicious, as the juiciness of the meat paired with the double-shell technique and fresh onions and cilantro manages win over even the starkest of seafood haters.

Nanataco knows what Durham craves, and it gives the foodies of this town exactly what they want. In a town looking for exquisite, fairly-priced food in a trendy setting, Nanataco fits the bill about as well as any other place in the area.

Unlike Taqueria la Vaquita and Chubby’s, Nanataco is not a modestly-housed taco shack. Rather, it is an extremely clean, dimly-lit, brightly-colored restaurant, topped with a sign supporting a metal iguana outside, that serves fresh food with a smile and has a decent neighbor in Q-Shack Barbecue. 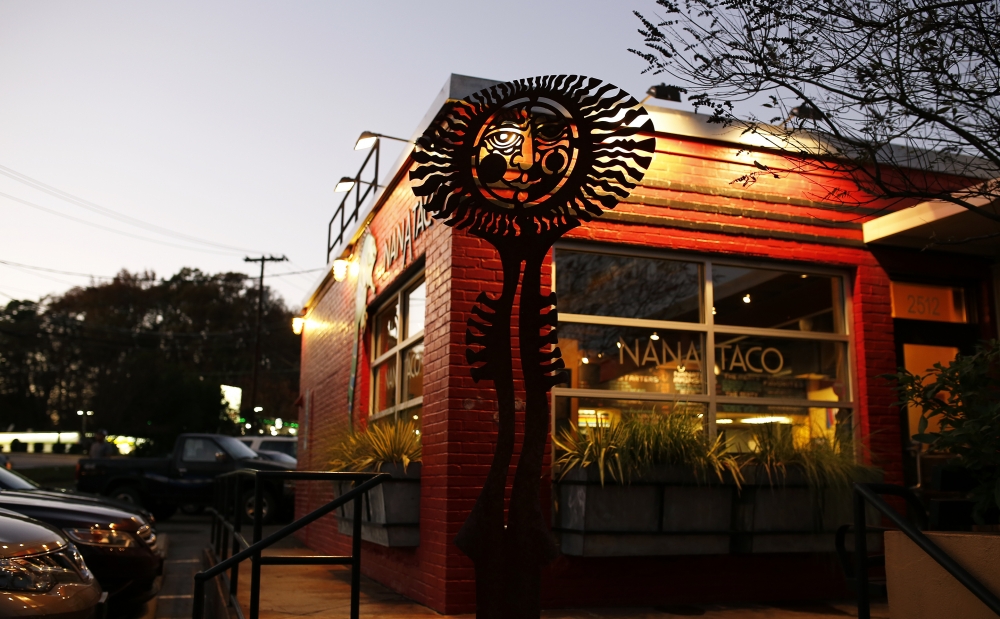 At the suggestion of the cashier—who was easily the most pleasant of the those working at the three restaurants—I went with the oyster taco, which, like the taco at Chubby’s, comes with a side order of chips and salsa. As I said earlier, I’m not so big on fish or fish-like food, but he made it sound like it was pretty great, so I tossed out my taste buds’ faulty opinions and gave it a shot. And per usual, I found out how dreadfully wrong I had been to deny myself seafood tacos for 21 years of my life.

The taco, served on a corn tortilla, was brought out to my table after about five minutes by another pleasant employee. Knowing there was fish on it, I took a moment to survey the technically-sound dish. It was presented in a red basket with a thin paper covering along with my order of chips.

The oyster, which was fried, was coated with the perfect amount of breading to add the desired crispiness but not to an extent that makes you forget there’s actually meat in there. As soon as my teeth cut through to the meat, I understood why my new buddy at the register had been so high on it. Nanataco’s oyster was delicious, working alongside the fresh onions to give off a juicy feel but managing not to leak all over my pants as tacos are generally wont to do.

I’m not saying you should definitely get the oyster taco if you go—Nanataco has more than its fair share of excellent meat and veggie options—but you should definitely at least go. Of the three, Nanataco is more suited toward a trendy crowd and is far and away the best-run and best-looking restaurant of the three I visited. Personally, ambiance doesn’t matter that much to me when it comes to getting tacos as much as it does for a sushi trip, but still, the efforts made to create a family, sit-and-stay atmosphere are a welcome sight.

If you do make the trip, just make sure to plan your trip smartly because Durhamites love Nanataco. You want to see madness? Go there, any day of the week, at 7 p.m.—what the manager referred to as, “the witching hour”—and see what I’m talking about. People can’t get enough, and I can’t blame them: Nanataco is delicious and definitely worth hitching a ride with that one friend with a car to try out.

Taqueria la Vaquita is such a quiet little place that if it wasn’t for the giant bull statue standing proudly atop the roof, you just might miss it on your first go-round. But if you want the best taco in town, you’d be wise to drive slowly as you cruise down Chapel Hill Road.

Whoever constructed Taqueria la Vaquita had a specific vision in mind, and that was of the perfect taco shack. The wooden store is indeed a literal shack, sporting the bull up top and an open-but-covered porch out front. And that’s about it. It’s simple, it’s inviting and it’s unique, all three being integral parts to constructing the ideal taco shack. A banging taco helps too, but building a quaint, humble restaurant is a good start. 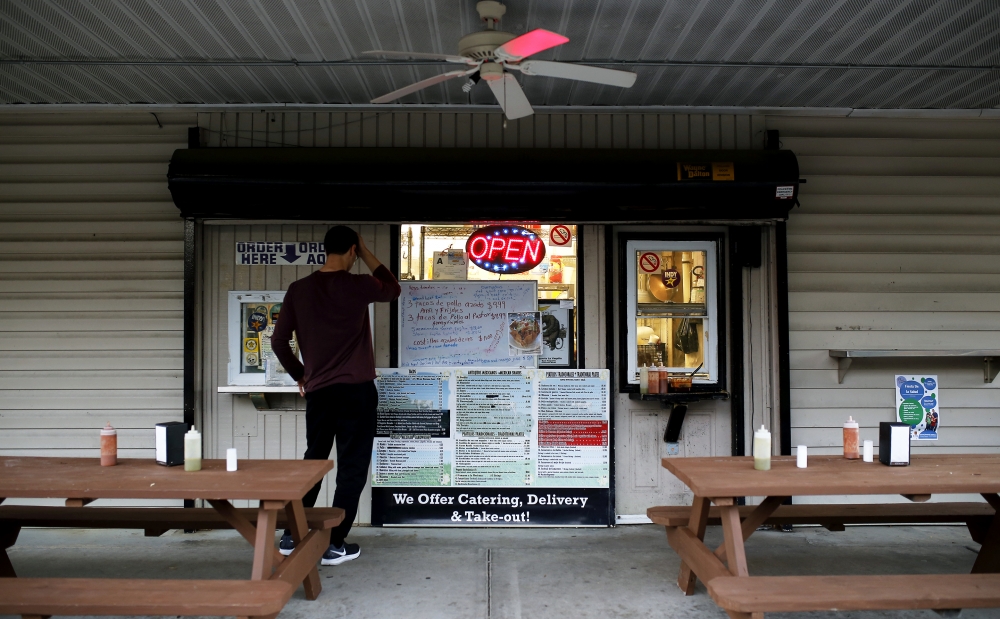 One of the most redeeming qualities about Taqueria la Vaquita is that there is no indoor seating. In some cases (see: rain, snow, etc.,) this can really hamper a restaurant and end up being more annoying than cutely campy. But for this taco shack, the covered picnic tables right outside work just as well as any enclosed structure. Of course, I went on one of the few beautiful days remaining in 2015, but still, the environment is very quaint—the fact that they serve a mean taco is an added bonus.

The pollo taco, like those of the other two restaurants, is made with a corn tortilla shell, and is about as authentic of a taco as you’re going to snag in Durham. Topped only with meat, onions and cilantro, the tender chicken and flexible-but-crisp shell burst with flavor upon the first bite, as the meat oozes saliva-inducing juices the moment you sink your teeth into the shell, leading to a second, then a third and then sadness because it is gone. My biggest regret that week was not missing my once-a-week class or my inability to buy Fallout 4, rather it was the fact that I only ate one Taqueria la Vaquita taco. (Having Fallout would be nice, though.)

Hailing this lovely store as the best taco spot in Durham wasn’t easy, as it faced stiff competition from Chubby’s and Nanataco. But the authenticity, paired with the simplicity of the setup and freshness of the materials make for an overall wonderful experience, and one that should be shared your friends as you grab a bite on a slow Saturday afternoon.

Note: One thing I didn’t realize when I visited Taqueria la Vaquita is that this place is more of a quick lunch spot than a dinner destination. I was the sole customer in sight, even having to ring the bell a few times after it appeared no one was behind the counter. Again, I should have swung by about five hours earlier, but I can’t say I was complaining about no line.

Unsurprisingly, Chubby’s is my favorite of these three taco joints. It’s not just because the food is filling and delicious (it is) or because it’s fairly priced (it is), but because unlike any other place around, Chubby’s has a real, honest-to-God, spectacular salsa bar.

This is what sets Chubby’s apart from every other taco, burrito, Mexican, Tex-Mex, etc., restaurant in Durham. Unlike how we all know Chipotle is objectively better than Moe’s Southwest Grill but still debate the two because of queso—seriously Chipotle, get with it, we want cheese!—Chubby’s vast salsa selection more than makes up for any shortcomings the restaurant may have. So, now that I’ve properly hyped it, let’s talk about The Salsa Bar.

The bar sits at the back of the store, past the free-refill drink machines—which is one of the few machines in the area to boast Cheerwine in its lineup—and cooking station under one of the store’s two televisions. The treasures all rest under a glass divider presumably there to keep customers from just diving into the guacatillo. Oh? What’s guacatillo, you ask? Some would respond, “Huh?” Others would instantly blurt out, “Liquid gold!” Until I looked up how to make it, I would usually offer a combination of both responses. Guacatillo, to put it simply, is a smooth dip that is a mix between verde salsa and guacamole, and the best part about it at Chubby’s: unlike the guac, it’s free. 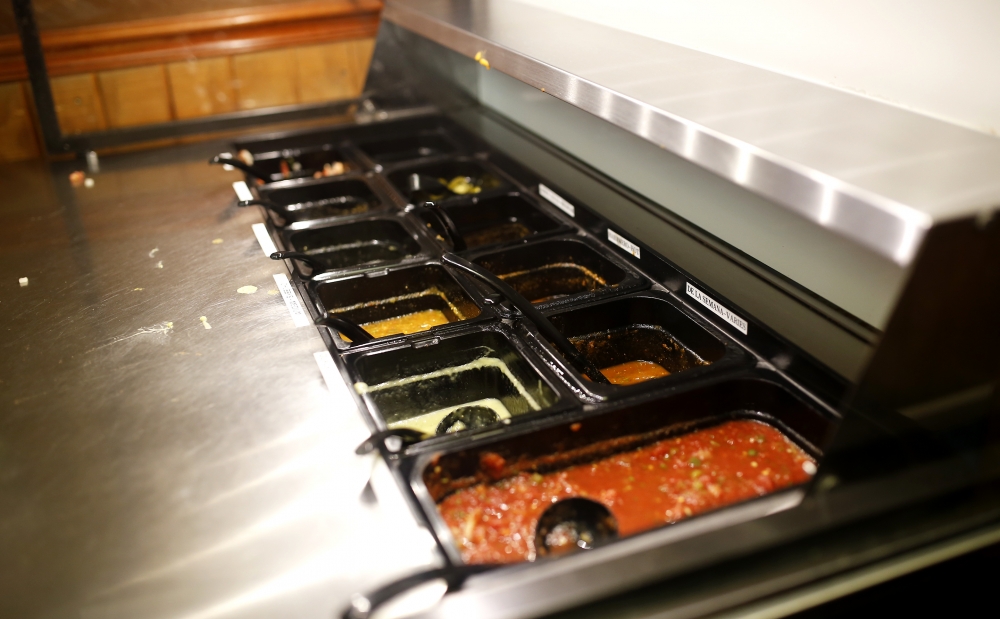 In addition to the green liquid gold, Chubby’s boasts six other salsas, including a deliciously fresh house salsa and, for the brave, a flaming habanero sauce. What makes the bar so special is an amazing combination of the surprising freshness of each option along with the fact that you can have as much of the seven salsas that you want! You just pick up a cup and start scooping. That’s the easy part. Stopping, now that is a true challenge.

Now, I’ll go ahead and spoil the rest of this section for you: Nanataco does not have a great salsa bar. It has pico, yes, and a couple of other options, one with a smokier taste, but that’s about it. And maybe I’m just a curious creature, or maybe I just love salsa (probably both), but their pico, though extremely fresh and quite good, pales in comparison to the creativity and effort that Chubby’s presents. Taqueria la Vaquita doesn’t have a salsa station.

If you’re ever looking to take your time and enjoy a meal, I recommend you head down to Chubby’s and give all seven salsas a shot. Just be careful: there is, cruelly, such a thing as too much salsa on your tacos. (Just kidding, drown that taco in guacatillo until you can’t see the meat.)

Duke-NUS researcher arrested under suspicion of being Russian agent