As the exhibition heat of the women’s 200-yard freestyle stepped up to the block in Duke’s season opener Oct. 3, the Blue Devils lined the side of the pool and started yelling their team captain’s name. A little more than four months removed from major surgery, senior Kiera Molloy had not expected to be back at Taishoff Aquatic Pavilion racing with her teammates so soon—and her doctors had not known if she would ever swim again.

Molloy underwent a total pancreatectomy with autologous islet cell transplantation (TP/AIT) May 28, a surgical procedure that lasted more than 10 hours in which her pancreas was removed and its insulin-producing islet cells were transplanted into her liver. Her surgeon said her expected recovery time was six months.

Molloy was back in the pool in six weeks.

“I wasn’t even sure I was going to be swimming in that meet,” she said. “It was really cool having everyone there and they started a ‘Go Kiera’ chant. I didn’t think that was ever going to happen. It wasn’t even about the swim, just the fact that I was in a suit again and able to do it so soon after. It was indescribable.”

Molloy was diagnosed with chronic pancreatitis when she was four years old. Her pancreas could not produce all the necessary enzymes to break down her food, causing her disabling pain. With each episode of pancreatitis, the inflammation of her pancreas worsened and the risk of permanent damage to the organ increased. Her pain could be relieved by medication administered in the hospital, but the condition itself has no cure.

The Raleigh, N.C., native went to Duke Hospital with each episode, and became a Blue Devil fan during the course of her treatment.

“When I was younger, [Duke men’s basketball head coach Mike Krzyzewski] would come around with his players and see the kids in the hospital,” Molloy said. “That and being around campus made me a huge Duke fan. Through all of that, because I was such a big Duke fan, I always wanted to come to Duke.”

Molloy started swimming competitively when she was eight years old. Despite being in and out of the water throughout high school as she battled each bout of pancreatitis, Molloy made swimming her priority, and her resume—state finalist in the 200- and 500-yard freestyles and 200-yard individual medley and two-time conference champion in the 200-yard individual medley—impressed Duke head coach Dan Colella, who recruited her to join the Blue Devils.

Once at Duke, Molloy’s bouts became longer and more severe, forcing her to drop classes and miss large portions of the swim season. Her doctors worried that she could end up in chronic pain as each episode irreparably damaged her pancreas.

Molloy suffered her worst bout shortly after Halloween last year. She was in and out of the hospital for nearly two months, constantly receiving pain medication and hardly able to eat.  But it could not keep her out of the water and away from her team.

She rallied to join the Blue Devils in Islamorada, Fla., for their training trip before Christmas. The squad logged extra hours of practice every day for a week, but Molloy kept pace.

Two months later and despite hardly competing in the fall, Molloy made Duke’s ACC championship team, finishing 26th in the 200-yard butterfly and reaching the C final of the 500-yard freestyle, posting the Blue Devils’ all-time sixth-fastest swim. But the highlight of her meet came on the third day of competition, when she swam a personal-best in the 400-yard individual medley in the morning preliminaries to qualify for the B final, then came back in the evening to break the Duke record with a new mark of 4:17.41.

“I think I probably made the ACC team by the skin of my teeth,” Molloy said.  “But getting that personal best—one that I hadn’t broken since high school—and that team record, there was the defining moment of ‘Hell yeah, I did it.’”

Molloy credits her teammates and coaches for their unwavering encouragement and support throughout her battle with her illness. Her teammates were at her bedside whenever she was hospitalized, and Colella and his coaching staff wisely kicked her out of practice if she pushed herself too much. The Blue Devils played a key role in her decision to take the next step in fighting her pancreatitis.

During her sophomore year, Molloy and her family learned about the TP/AIT procedure. The removal of her pancreas would relieve her chronic pain, but the recovery process would be grueling. The surgery would also leave her with type I diabetes without the cells to produce insulin. Managing blood sugar is a challenge for any new diabetic but would be even more so for Molloy as an athlete training four hours per day. The procedure is only performed at a handful of institutions across the country, and Molloy and her family began visiting hospitals to decide not only where she would have the surgery, but also where she would be recovering for a month and a half afterward. They eventually chose the Medical University of South Carolina at Charleston, but did not initially set a date for the procedure as Molloy was still unsure whether she wanted to wait until after college.

At the same time she was considering the procedure in Charleston, Molloy found another mentor, friend and confidant: Duke head football coach David Cutcliffe.

In his first months as head coach at Ole Miss in Dec. 1998, Cutcliffe was hospitalized for bouts of pancreatitis. Two months later at Baptist Memorial Hospital-North Mississippi, he had his gallbladder removed because its chronic dysfunction was the cause of his pancreatic inflammation. 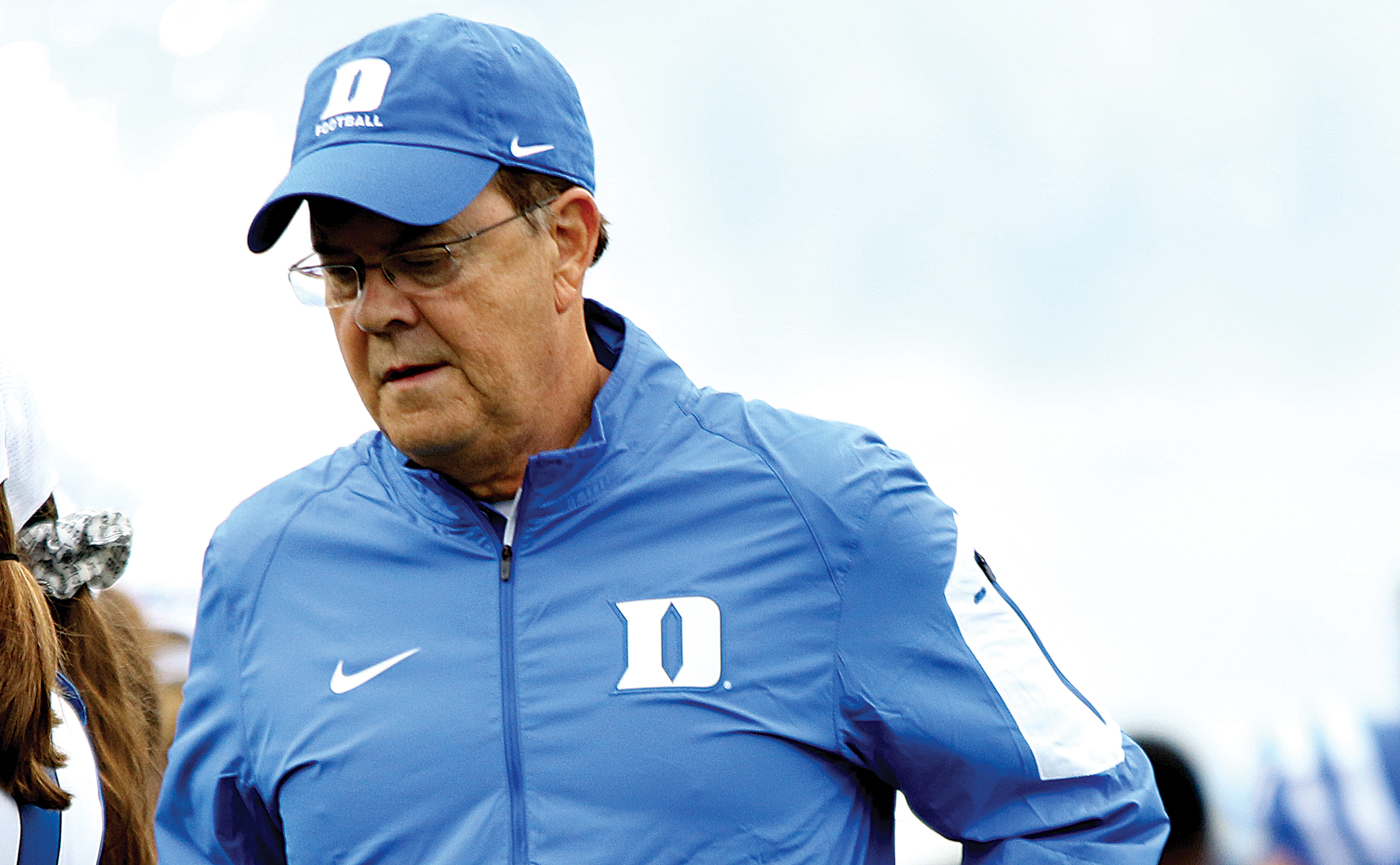 Molloy’s mother reached out to Cutcliffe, asking him to send her daughter a quick email in hopes that his encouragement would make her feel better. But Cutcliffe had another idea. He went to visit Molloy while she was in the hospital.

“I said I’d love to come over there and say hi. That’s literally what I was going to do. But the honest truth is she inspired me way more than I did anything for her,” Cutcliffe said. “Unless you have dealt with pancreatitis, you don’t understand pain. She was so strong, and her spirit was so good. I think back to what I was like, and I was blown away by her strength.”

Cutcliffe became one of Molloy’s regular visitors when she was in the hospital and kept frequent contact with her family. Given their shared experience, Molloy relied on him as a source of support as she was deciding whether or not to go through with the surgery.

“As she was facing this very difficult decision—and it had to be her decision—to go to Charleston, most of my role there was to encourage her by cell [phone], by email and by prayer,” Cutcliffe said. “She’s got a great will. A big part of being an athlete is your competitiveness and she feeds off that. For her to be able to get back out there and compete—that’s everything.”

Molloy underwent the TP/AIT procedure May 28. She was in the intensive care unit for seven days and remained in the hospital for another two weeks after that. She stayed in Charleston for three weeks for constant check-ups with her healthcare team.

When she returned home, she could not resist coming back to campus.

Molloy started working with Cutcliffe and the football team as soon as she got back to Duke. Cutcliffe gave her a desk on the fourth floor of the Yoh Football Center, where she works with his administrative assistants and organizes the team’s recruiting databases.

And as soon she was cleared to swim, she was back in the water at Taishoff doing what she loves. She started with a few hundred yards and built her endurance until she could return to practice, much to her doctors’ surprise.

“Kiera is an extraordinarily tenacious young lady. Her doctors think she is the wonder-child,” Colella said. “To have that surgery and to be able to come back and do what she does on a daily basis is absolutely remarkable. She has an absolute love for swimming and this university, and she can’t think of not having it in her life.”

Molloy’s dedication to swimming and her team made her an obvious choice for team captain for the 2015-16 campaign.

“I take the job very seriously, but there’s something to be said about swimming for the love and enjoyment of the sport,” Molloy said. “My experience has taught me to appreciate the journey and never take it for granted. That’s what I try to convey as a leader of the team. As we like to say, “’For the Team, From the Heart.’”

Share and discuss “Duke swimming's Kiera Molloy back in the water after surgery to remove pancreas” on social media.