Duke's relationship with its most (in)famous alumnus

Before Richard Nixon became president—before his name became inextricably linked with American political scandal—he was a member of the Duke School of Law’s Class of 1937. But Nixon’s legacy at the school, much like his legacy in American history, has long been complicated.

Even before Nixon fell from grace in the Watergate scandal, his politics made him unpopular with many at the University. After Watergate, the relationship only grew icier. Nixon’s portrait was removed from the walls of the law school in 1974, and faculty battled the administration to ensure that Duke did not become the home of Nixon’s presidential library.

Last year marked two decades since Nixon’s death and four decades since he received a presidential pardon for his role in Watergate. And now, the Nixon-Duke relationship may be thawing a bit. The past five years have seen the School of Law hang Nixon’s portrait in its library once again, while law students have started an annual comedy performance called “Tricky Dick” featuring a fictionalized version of Nixon.

There are still those who resist promotion of the Duke-Nixon connection. But for many, Tricky Dick is becoming an intriguing figure in Duke lore, rather than a shameful one: “an evolution of attitude toward Richard Nixon,” in the words of his youngest brother, Edward Nixon.

The question of Nixon’s legacy at Duke began as a question of how the University would honor an alumnus who, while successful, was incredibly politically polarizing.

In 1954, while serving as vice president, Nixon was invited to speak at commencement. Typically, the faculty award honorary degrees to graduation speakers—but professors balked at the idea of granting a degree to such a highly political figure, particularly a conservative one. Some specifically took issue with his involvement in the McCarthy hearings and his campaign practices, including the allegations of financial fraud levied at him during the 1952 election. It was the first time the University tried to distance itself from Nixon, and ultimately, he decided not to speak at the ceremony.

When Nixon was elected president in 1968, some felt the accomplishment was worthy of recognition by Duke, prevailing campus political beliefs notwithstanding. A bipartisan group of law students raised money to commission a portrait of Nixon, which was presented to the School of Law in 1969. But others were less pleased with Nixon’s win—The Chronicle, the daily student newspaper, printed a black border on the morning after the election.

“A front page black border is a newspaper’s traditional symbol of mourning,” editors wrote. “Today, after the election, The Chronicle displays it.” 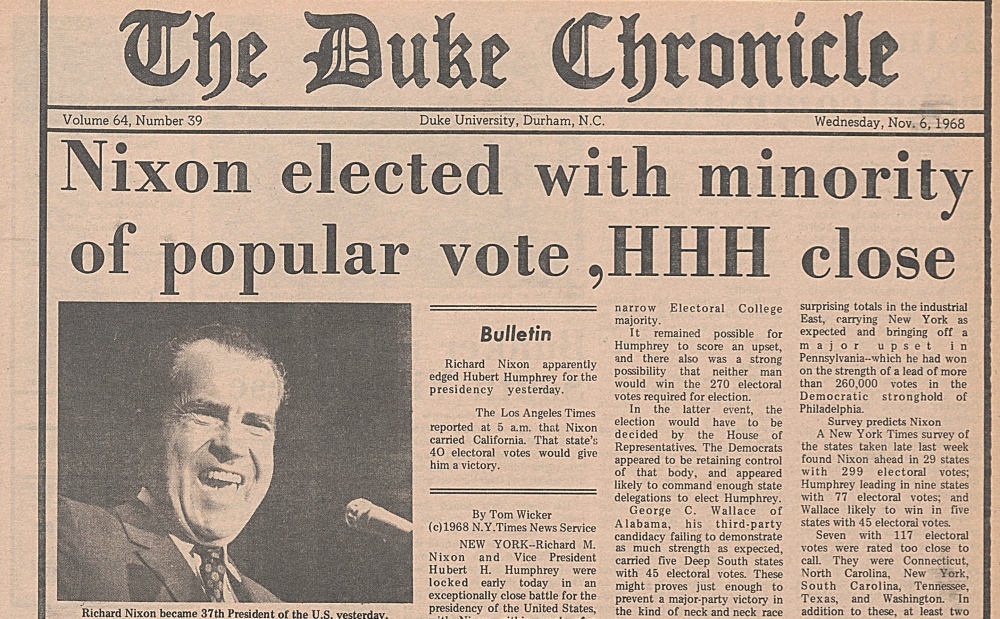 Nixon was re-elected in 1972 in a landslide victory. But less than a year later, he was at the center of investigations regarding the Watergate scandal. And in 1974, he became the first and only president to resign.

From there, Duke’s relationship with Nixon grew more bitter. A group of students stole the Nixon portrait and hid it in the ceiling tiles of a campus elevator. When the portrait was retrieved, the University locked it in a vault for safekeeping—and did not take it out for decades.

A question of history

Nearly 30 years after the controversy over Nixon’s honorary degree, the former president sparked another heated faculty debate—this time, one that garnered national headlines and questioned Duke’s values and duties as an institution.

In the summer of 1981, Nixon began discussing possible locations for his presidential library, which would house documents and artifacts from his time in office. Duke was high on the list and the University’s president, Terry Sanford, was interested.

Many faculty, however, were not.

Some felt Nixon’s library would be an incredible step forward for Duke scholarship—giving the papers from one of America’s most fascinating presidencies a permanent home in Durham. But others thought hosting the library would be committing a moral transgression, not winning a research jackpot.

“Let the issue be defined, I say, as Duke’s choice between assisting historical scholarship on the one hand—and on the other hand accepting the moral, spiritual, social and political significance of the honor conferred upon Richard Nixon through this act and this structure forever upon our campus,” psychology professor Norman Gutman wrote at the time.

Opponents noted that presidential libraries are typically memorials to their namesakes, and not traditional research institutes. The Nixon library, like other presidential libraries, would include a museum—and some faculty members feared that the museum could become something more akin to a tribute than an honest look at the Nixon presidency.

“For every serious scholar who visits the libraries to conduct research, there are a thousand tourists who come to look at the shrine and its artifacts,” read a 1981 Academic Council report on the library negotiations.

It's time to get excited about Duke football

The faculty weren’t wrong. In 1980, 1.7 million people visited presidential libraries, according to the Christian Science Monitor—just 1,933 of those were researchers.

Some noted that hosting the library would hurt Duke’s reputation, forever linking the University to one of the country’s darkest political moments—“converting dishonor and notoriety into celebrity,” as described in a letter to Sanford written by four anthropology professors.

Sanford did not agree.

“A great university need not fear damage by association, but rather should cherish a spirit of self-confidence, and should steadfastly maintain its role as a preserver and seeker of truth,” he wrote in a memo to the faculty. “I would be sorry to see us take a timid view of ourselves.”

For many professors, the central question was one of history and time. Supporters of the library argued that while Nixon and Watergate might seem so reprehensible in 1981 that hosting the library could be controversial, this would not always be the case. In the decades to come, the raw political contempt for Nixon would fade—but the academic value of his papers would remain.

“The opposers operate in far too narrow a time frame. They are far too now-minded,” wrote Edwin Cady, an English professor, in a letter to Sanford. “A great university lives in a time frame wholly other from the brief spans of the people who build it through centuries as others erect cathedrals. If we get the Nixon Papers, he and we will be matters of history very shortly. The documents will be there for history, for our successors, very likely for centuries.”

But some faculty thought that the disgrace of Watergate would be felt for generations, and a Nixon museum would never be acceptable—even after decades, centuries, millennia had passed.

“In 5,000 years, as with the pyramids and their pharaohs, people may have forgotten who Mr. Nixon was,” wrote the chairs of the history department, Richard Watson and Anne Firor Scott. “But so long as American history is taught, school children will learn that Mr. Nixon was, until 1981 at least, the only president who resigned from his office to avoid being impeached for dishonoring it.”

Though the Board of Trustees voted to pursue negotiations for the library, the faculty voted against it. By the Spring of 1982, the negotiations with Duke died down, and a year later, Nixon’s birthplace of Yorba Linda, Calif. was announced as the site for his library. 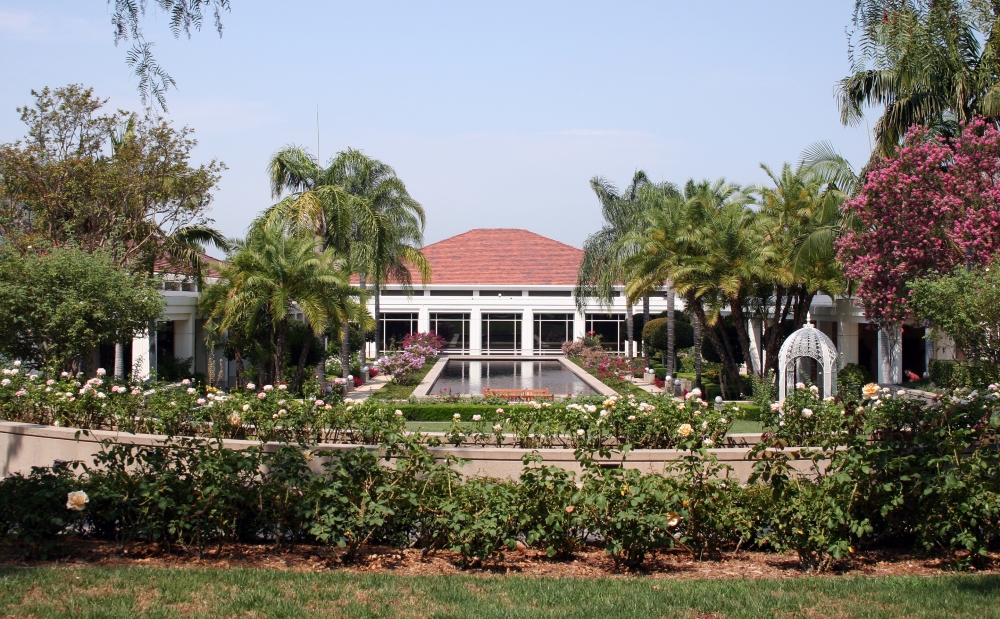 Today, some feel that the Nixon Presidential Library has only served to confirm the arguments made by the library’s challengers at Duke. The library is the shrine to Nixon’s presidency that faculty had worried it would become, said William Chafe, professor emeritus of history and a vocal opponent of the library during the negotiations.

“The history of the Nixon Museum, as it exists, verifies everything we said,” Chafe said. “It would have dramatically altered the identity of and vision of Duke.”

A Man and His Alma Mater

Nixon was said to be frustrated by the failed library negotiations at Duke, but even so, he remained fond of his alma mater until his death in 1994.

“We’ve always retained—my brother always did—the idea of Duke as a great university, and we support it, and we ignore the detractors,” said Edward Nixon, reached by phone at his home in Lynnwood, Wash.

The younger Nixon, 85, is a fellow Blue Devil. He followed his older brother to Durham to join the Trinity College Class of 1952, where he majored in geology—“[Richard] was interested in human history. I was interested in prehistory, geology, rocks.”

He still visits campus when possible, with plans to attend this April’s Reunion Weekend. And in recent years, he’s felt a shift in campus views of his brother’s legacy.

More than 20 years after his death, Nixon has a new presence on campus. His portrait—locked away for years, before being loaned to the U.S. Capitol in the 1990s—is finally on display again. When the School of Law made plans to renovate Goodson Library in 2008, it included a space for the portrait, and it has hung on the fourth floor for at least three years now. 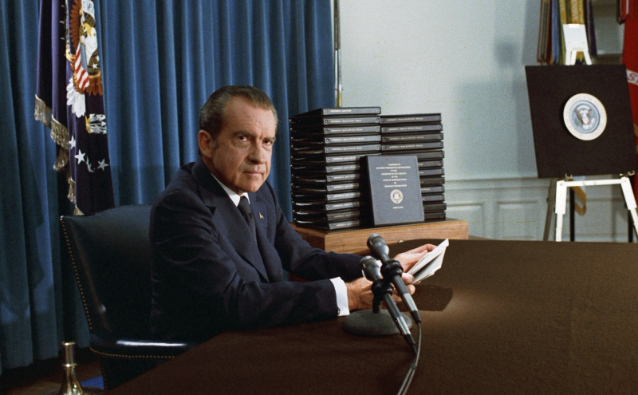 The play is a humorous, cabaret-style look at Nixon running for student body president. The idea of using Nixon “was all in good fun,” said Justin Becker, Law ‘12, who co-directed the play and starred as Nixon in 2011.

“It’s not a celebration of Nixon’s character flaws,” Becker said of the play. “It’s more so a celebration of the acceptance of the fact that there was this individual in our past, whether we like it or not…. You can’t pick and choose, but you should always have a full conversation about the individuals who are a part of your history, and that’s what we did.”

Most of today’s law students were born almost two decades after Watergate, and for many, the Nixon-Duke relationship is more an amusing footnote for the University than a source of shame. On a recent afternoon in the law school’s refectory, asking for thoughts on Duke’s ties to Nixon led several students to discuss the Tricky Dick musical and the legend of Nixon’s “iron butt”—from hours of studying in the same spot in the library—rather than the political disgrace of Watergate.

“It’s before my time,” said second-year law student Amy Richardson. “It’s like anything where Duke loves its legacy, loves its traditions.”

To be sure, Nixon’s legacy is not one that has always been embraced by Duke, and today it’s not embraced so much as it is acknowledged. But for a man who once said, “I always remember that whatever I have done in the past, or may do in the future, Duke University is responsible in some way or another”—perhaps that would be enough.

Share and discuss “Duke and Tricky Dick” on social media.

Presidents, provosts, puppies: Here's who you need to know at Duke