North Carolina brews you should be drinking

The outfield of the Durham Bulls Athletic Park played host to the 16th annual World Beer Festival Saturday Oct. 8. Duke undergrads were scarce, maybe because tickets were $40 or maybe because it was Fall break. The brewers didn’t seem disappointed—the event’s two sessions drew thousands of locals and visitors, but they were generally older drinkers with more refined, experienced palates. Apparently, those new to beer tend to gravitate toward the cheap, highly alcoholic stuff, at least at first.

Walking past the long lines of rowdy fest-goers sporting homemade pretzel necklaces to look for the media tent that warm afternoon should have given me an idea of what the inside of the stadium might look like, but the sight still staggered me. More than 100 breweries offering two-ounce tastes of more than 300 beers were packed onto the outfield under more than 30,000 square feet of white tents. The wall of sound hit me before the smell of fresh beer. Local bands tried to entertain the buzzing crowds, which paid more attention to the brew and the food than the music.

Crammed thick with revelers socializing, sampling and comparing costumes, it took determination to make it to the taps at some brewers’ stations. At each table, festivalgoers could pour out the dregs of their last taste out of their official tasting glasses into a bucket, then request—or shout for—a new sample from the brewery representatives. The toughest tables to navigate were in the North Carolina brewers’ tent. North Carolina boasts more craft breweries than any other southern state with 21 brewpubs and 28 production breweries. Many of these call the Triangle home, with locations—or bottles—close to campus.

The revelers didn’t leave the festival craft beer experts, and neither did I. But you can boost your brew expertise with advice from the craftsmen. The next time you’re picking up something at Sam’s Quik Shop or ordering a drink on Main Street, here’s what the local experts recommend you try—and what you should try it with. 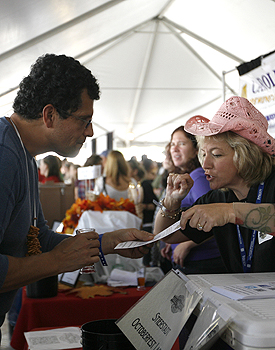 For newbies: Bryant Bridge Gateway Ale, a “gateway” into craft beer with a light fruity flavor, low on hops and alcohol.

Pair with: A hotdog plain or with spicy beer mustard.

Feeling adventurous? Try an experimental or seasonal brew like the Harvest Ale.

Pair with: A burger with mushrooms, gruyere and caramelized onions.

We recommend: Pigmeat Markham, a smoked rye ale that balances a lightly smoked flavor with a lighter texture and full flavor “reminiscent of bacon.”

You should know: BCBB brews its own beer, grinds its own beef, makes its own veggie burgers, cooks its own condiments (except the ketchup) and bakes its own bread—all in house. The beer is meant to be paired with food, so go hungry. 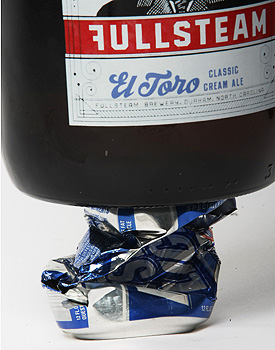 Pair with: Tamales, a burger or pizza.

Feeling adventurous? Try Hogwash, a hickory-smoked brown porter that is a southern twist on a style that has existed for centuries.

Pair with: North Carolina barbecue for a smoke-on-smoke taste, or a chocolate dessert for a contrast.

We recommend: El Toro, it’s light and easy to drink, and you can order it “Shandy Style” mixed with fresh lemonade to give it a tangy, citrus kick.

Advice for those looking to experiment: “I remember my beer epiphany moments, but I was 30, I was ready. With the younger crowd, they’re growing up not knowing anything but that craft beer is out there,” said Sean Lilly Wilson, MBA/MPP ’00, owner. He urges drinkers to “explore the world of beer that goes beyond the pale, fizzy lager.”

You should know: Food trucks almost always haunt the entrance, so buy or bring dinner to pair with a beer and enjoy the open picnic-style seating. 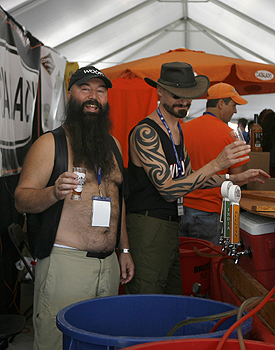 Feeling adventurous? Try the Imperial Amber Ale, a brew that has a strong malt presence and invigorating citrus and floral aromas.

Pair with: A burger with bacon and bleu cheese.

We recommend: Golden Ale. They aren’t kidding, it will get you drunk with 8.0 percent ABV.

Advice for new drinkers: “Try everything you can get your hands on. Find one you like, and go from there. [My favorite beer is] whatever is in my hand,” said Richard Tufts, head brewer and part-owner. 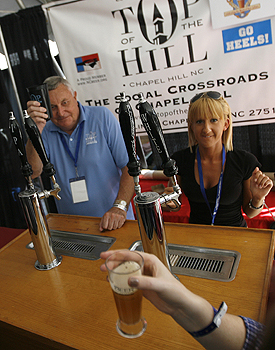 Looking to branch out? Try the Kenan Lager, light in color with a delicate taste and a dry finish.

We recommend: Blue Ridge Blueberry Wheat. You can definitely taste the blueberries in this creamy, light beer that is easy to drink.

Withey’s advice: “Don’t be afraid of the dark because some of those are quite good and they’re not all super strong.”

One thing you should know: Top of the Hill may support the wrong color blue, but it’s a great place to take a date. Sit on the roof and enjoy the view. 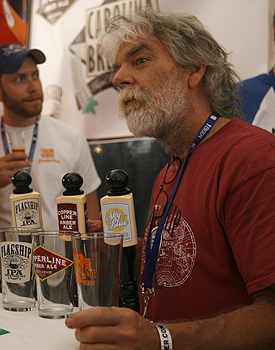 For newbies: Copperline Amber Ale, a red ale brewed with caramel and pale malts. The ale yeast provides a light fruit taste and works with the malt to make it a drinkable ale.

We recommend: Copperline Amber Ale, which was smoother than their Sky Blue Golden Ale. It’s clear why this one is a best-seller.

You should know: You can purchase Carolina Brewery’s beer in eco-friendly six-packs throughout Durham. 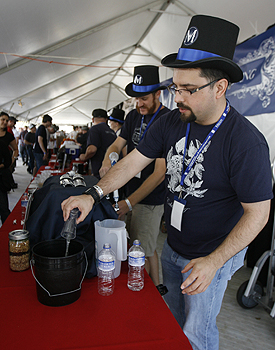 What he thinks you’ll like: Six Impossible Things chocolate Breakfast Stout, a rich, buttery oatmeal stout with cocoa and coffee tones. The grain in this beer is designed to give it chocolate, toffee and caramel notes without overt bitterness.

Or try: Evangeline Farmhouse Ale, a dry, peppery brew on the other end of the spectrum.

We recommend: Queen Anne’s Revenge, a brew that is designed to be a darker version of an English-style IPA balanced with the rich chocolate of roasted malt.

You should know: Every beer at Mystery Brewing is named as a literary or historical reference. Erik Lars Myers, founder, chief executive officer, brewmaster, wants you to figure them out yourself, but for example, Six Impossible Things is a reference to “Alice in Wonderland.” “We’re trying to match the reference with the feel of the beer. We’re nerds, trying to be smart about everything,” Myers said. 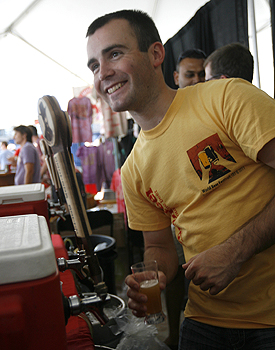 For newbies: Shotgun Betty, a wheat beer with a banana-clove nose and dry finish, which the brewers’ named for a “sexy, tough cowgirl who is always armed and dangerous.”

Looking to branch out? Try Sweet Josie, an American brown ale “temptress.” The beer balances a hop bitterness with chocolate and aromatic malts.

We recommend: Sweet Josie, she is seductive—different enough to be enticing, but familiar enough not to be intimidating.

Advice for new craft beer drinkers: “Be adventurous, don’t stick with the same stuff all the time. The brewer is out there introducing new stuff all the time, don’t keep your blinders on,” said Bruce Dow, part-owner.

You should know: The brewery offers tasting room hours Thursdays, Fridays and Saturdays. 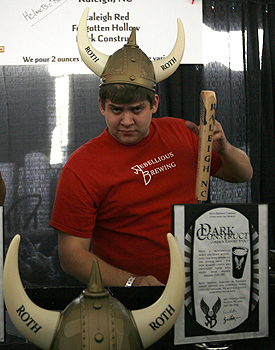 For newbies: Raleigh Red, an American amber ale that’s medium-bodied with a biscuit flavor and a subtle floral hop aroma.

Looking to branch out? Try the Dark Construct, a mature thick-bodied sweet stout that is great all year long.

We recommend: Dark Construct, which was smooth and sweet, but not overly so.

Advice: “Find a style you like and experiment with that style,” said Michael Natale, director of marketing and sales. “It’s impossible to like all beers in the world, and if someone says they like them all, then they’re lying. Also, remember the best beer is a free beer.” 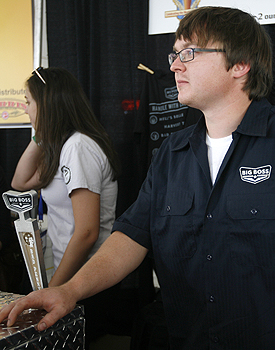 For newbies: Angry Angel, a pale German style ale that is cold-fermented and cold-conditioned to strike a balance between biscuit malt flavors and floral hop tones. It is light-bodied and finishes a little dry to enhance its easy drinking nature.

Feeling adventurous? Try Bad Penny, a subtle but complex ale that is meant to showcase Belgian yeast and malts to produce a clean, spicy citrus finish.

Pair with: Beef or pork.

We recommend: Bianco Diablo, a traditionally spiced wit, brewed with orange peel, coriander and fermented with a traditional Belgian wit yeast. It has a dry, thirst quenching finish.

You should know: You can get Big Boss at Harris Teeter, Whole Foods, Kroger and Food Lion. 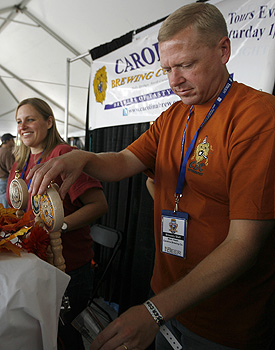 For newbies: Carolina Pale Ale, an amber brew with three kinds of American-grown hops to create a bitterness and lingering hop taste.

Feeling adventurous? Try the Carolina Nut Brown, a medium bodied, dark brown ale with a complex chocolatey, toasted malt taste. It is intended to have a dry, nut-like taste that makes it different from other sweet brown ales.

We recommend: Carolina Oktoberfest, a seasonal brew described as a smooth, amber lager with caramel and toffee malt flavors that is good for cooler weather and sweeter than the sharp pale ale.

You should know: The brewery offers free tours and tastings Saturdays at 1 p.m. Maura and Greg Shuck, owners of Carolina Brewing Co., know beer—Maura started home brewing when she got a kit for her 21st birthday. 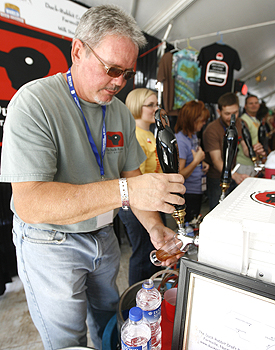 THE DUCK-RABBIT CRAFT BREWERY Farmville, about 99 miles from Duke

For newbies: Amber Ale, a medium-bodied beer with a copper color. The lightest of the Duck-Rabbit dark ales, this brew emphasizes malt complexity with layered caramel malt flavors.

Pair with: Bacon and eggs.

We recommend: Amber Ale. Although it’s definitely worth trying the Milk Stout, it’s very different. If you’re not in the mood to experiment, stick with an American classic.

Advice: “Drink everything.... If you don’t like beer, you haven’t tried the right one,” said Robert Owen, brewery representative.

You should know: Many local bars and shops carry Duck-Rabbit year-round, including The Federal and Sam’s Quik Shop. Although the Triangle is home to many breweries, Owen says that’s a good thing: “This industry is great because as much competition as there is, there’s lots of camaraderie, we’re all friends.”

Share and discuss “North Carolina brews you should be drinking” on social media.