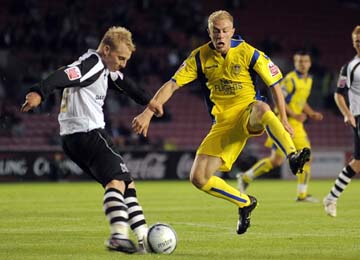 It's been a good week for Leeds United striker Mike Grella. After playing 82 minutes and earning Man of the Match honors in Monday's win over Darlington, the former Duke star signed a three-year contract with the club Wednesday.

Grella's final season as a Blue Devil ended with a first-round NCAA Tournament loss, but his playing days weren't over. The forward went on trial with Leeds United in January, scoring a hat trick in his first reserve game and inking an 18-month contract shortly thereafter.

Grella joined the League One club midway through its season and did not see consistent playing time, appearing in 11 games off the bench. After going through his first preseason with the squad--and watching star striker Jermaine Beckford sustain a knee injury in United's opening game against Exeter City--Grella earned the start against Darlington. Two days later, he signed his new contract.

Leeds United plays in League One, the third division of English soccer.

"I'm absolutely delighted to have signed the deal," Grella said. "It is good to know that the club have instilled a bit of belief and confidence in me."

With Beckford slated to return to the lineup this week, Grella may go back to the bench. But he impressed in his first regular season start and should see increased playing time this season as Leeds United fights for promotion. And now he has the peace of mind that comes with a longer contract.

"I was hoping to play in Europe my entire life," Grella told The Chronicle in June. "I always kind of knew I would."

After today's signing, he's guaranteed to do it for at least three more years.

Share and discuss “Grella Signs On For Three More Years” on social media.

Loss to No. 7 Virginia shows just how tough No. 2 Duke women’s soccer is to beat

Beats' picks: Can Duke football win its third straight game of the season against Kansas?