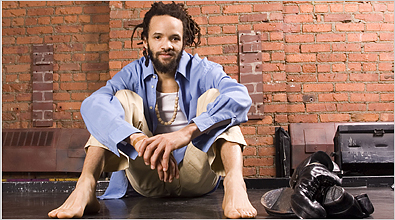 When I talked to Savion Glover a couple of weeks ago, he told me that his show in Page Auditorium would be like Miles Davis, Ornette Coleman and John Coltrane all on the same stage, wearing tap shoes. That might be a bit of a stretch—all of those gentlemen were stars, whereas Savion was clearly the head man on stage—but the display of virtuosity was remarkable.

Page was packed with a sell-out crowd; some of them clearly were familiar with tap, but many of us (read: me) were not. Tap is superficially accessible—who doesn’t love some wild dancing?—but more opaque beyond that. I got the sense all night that although I was hearing elaborate, impressive rhythms, Glover and his two supporting dancers, Marshall Davis Jr. and Maurice Chestnut, were hearing melodies I wasn’t able to discern. This was perhaps most evident when they riffed on the Mongo Santamaria line “Afro-Blue” (made famous by Coltrane). Glover, singing into a wireless mic as he danced, sang the melody of the tune as the three worked in a carefully coordinated, tight routine. It was easy to hear how the music and dancing lined up when he was singing, but once he stopped, it was hard to match up the tune with the steps. Still, Glover and his team work like jazz musicians: they played heads to their tunes, then took turns taking solos on the frame. Elsewhere they traded eights, like players on the bandstand. (There was also the requisite Monk playing over the PA.)

And in performance style, the show resembled a modern jazz show. Duke Performances’ Shuffle and Pick  series, of which this was a part, spotlights the West African roots of banjo and tap, both of which are often linked to minstrelsy. Just like the button-downed performance style of post-swing jazz players, there was none of the showboating of minstrelsy. Although Glover occasionally let himself be swept up by the music and although he seemed to involuntarily take on an effervescent, wide grin as soon as his feet started moving, the show was all below the knees, there was no clowning and Chestnut and Davis were downright stoic for most of the show.

The danger for a tap show, because of the opacity, is that the audience’s ears will glaze over, and everything will start to sound like one long drum solo, with the clatter of taps and bass of heels all blending together. An intermission halfway through went a long way to avoiding that pitfall. I won’t even try to describe the fearsome foot pyrotechnics that went on. The trio tapped, scraped, stomped, leapt and clapped in ways that have to be seen to be believed. If you closed your eyes, the three almost sounded like a trap set, with two of the dancers keeping a steady pulse going whenever the third was soloing.

A strong first half was followed with a transcendent second half. To start the half, the three performed a piece called “Trading Places,” where they traded the eights, each dancing eight bars and then leaping off the dancing platform just as another dancer jumped off—never missing a beat (during this number I occasionally realized my mouth was physically agape, and had to close it… only to find myself doing the same three minutes later). They followed this with the strong “Afro-Blue,” then “Gigantic Steps” (another Coltrane reference, from his “Giant Steps”) and then a solo number for Glover. Ninety minutes of solo tap would have been too much for this novice (perhaps the variety is the reason I liked the Tamango-Charlie Hunter show last month so much), but seeing the man many call the world’s best tap dancer doing his solo act would have been the highlight of the night, if not for “Trading Spaces.”

But don’t take it from me: In three years and change of religious Duke Performances attendance, I have never seen such energetic applause for any artist, even the most intensely moving of the soul concerts last spring. I guess being in the presence of sheer virtuosity will do that.

‘Emergency Intercom’ and the humor in frankness

Duke football showed grit in defeat to Kansas, but there is still plenty of room to grow